Yves here. Summers and Stansbury take a cautious stand in this piece. While they don’t claim to have found a cause or set of causes for the way average worker wages started lagging productivity gains in the 1970s, a critical driver of skyrocketing inequality, they do rule out rapid change. That is an important finding, since the claim that technology improvements were the driver of workers not sharing in the benefits of productivity gains is used politically to argue that it is a natural or even worse, virtuous outcome of innovation.

Since 1973, there has been divergence between labour productivity and the typical worker’s pay in the US as productivity has continued to grow strongly and growth in average compensation has slowed substantially. This column explores the causes and implications of this trend. Productivity growth appears to have continued to push workers’ wages up, with other factors to blame for the divergence. The evidence casts doubt on the idea that rapid technological progress is the primary driver here, suggesting rather that institutional and structural factors are to blame.

Pay growth for middle class workers in the US has been abysmal over recent decades – in real terms, median hourly compensation rose only 11% between 1973 and 2016.1 At the same time, hourly labour productivity has grown steadily, rising by 75%.

This divergence between productivity and the typical worker’s pay is a relatively recent phenomenon. Using production/nonsupervisory compensation as a proxy for median compensation (since there are no data on the median before 1973), Bivens and Mishel (2015) show that typical compensation and productivity grew at the same rate over 1948-1973, and only began to diverge in 1973 (see Figure 1). 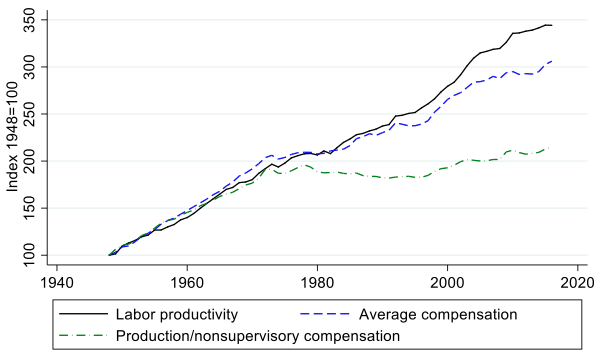 A number of authors have raised these questions in recent years. Harold Meyerson, for example, wrote in American Prospect in 2014 that “for the vast majority of American workers, the link between their productivity and their compensation no longer exists”, and the Economist wrote in 2013 that “unless you are rich, GDP growth isn’t doing much to raise your income anymore”. Bernstein (2015) raises the concern that “[f]aster productivity growth would be great. I’m just not at all sure we can count on it to lift middle-class incomes.” Bivens and Mishel (2015) write “although boosting productivity growth is an important long-run goal, this will not lead to broad-based wage gains unless we pursue policies that reconnect productivity growth and the pay of the vast majority”.

Has Typical Compensation Delinked from Productivity?

Figure 1 appears to suggest that a one-to-one relationship between productivity and typical compensation existed before 1973, and that this relationship broke down after 1973. On the other hand, just as two time series apparently growing in tandem does not mean that one causes the other, two series diverging may not mean that the causal link between the two has broken down. Rather, other factors may have come into play which appear to have severed the connection between productivity and typical compensation. 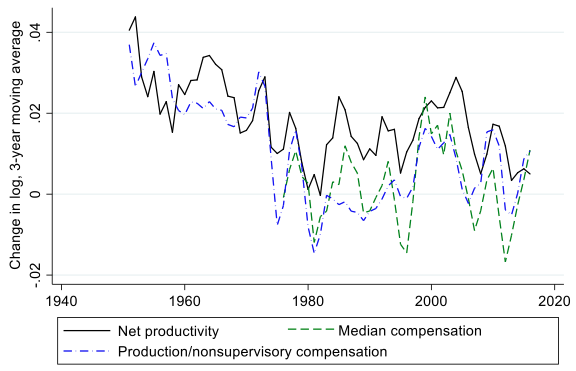 If the Link Between Productivity and Pay Hasn’t Broken, What Has Happened?

For both of these phenomena, technological change is often invoked as the primary cause. Computerisation and automation have been put forward as causes of rising mean-median income inequality (e.g. Autor et al. 1998, Acemoglu and Restrepo 2017); and automation, falling prices of investment goods, and rapid labour-augmenting technological change have been put forward as causes of the fall in the labour share (e.g. Karabarbounis and Neiman 2014, Acemoglu and Restrepo 2016, Brynjolffson and McAfee 2014, Lawrence 2015).

While we do not analyse these theories in detail, a simple empirical test can help distinguish the relative importance of these two categories of explanation – purely technology-based or not – for rising mean-median inequality and the falling labour share. More rapid technological progress should cause faster productivity growth – so, if some aspect of faster technological progress has caused inequality, we should see periods of faster productivity growth come alongside more rapid growth in inequality.

Taken together, this evidence casts doubt on the idea that more rapid technological progress alone has been the primary driver of rising inequality over recent decades, and tends to lend support to more institutional and structural explanations.

Table 1 Average annual growth rates of productivity, the labour share and the mean/median ratio during the US’ productivity booms and productivity slowdowns

The slow growth in median workers’ pay and the large and persistent rise in inequality are extremely concerning on grounds of both welfare and equity. There are important ongoing debates about the factors responsible for this phenomenon, and what must be done to reverse it.

Our contribution to these debates is, we believe, to demonstrate that productivity growth still matters substantially for middle income Americans. If productivity accelerates for reasons relating to technology or to policy, the likely impact will be increased pay growth for the typical worker.

This suggests that the potential effect of raising productivity growth on the average American’s pay may be as great as the effect of policies to reverse trends in income inequality – and that a continued productivity slowdown should be a major concern for those hoping for increases in real compensation for middle income workers.

This does not mean that policy should ignore questions of redistribution or labour market intervention – the evidence of the past four decades demonstrates that productivity growth alone is not necessarily enough to raise real incomes substantially, particularly in the face of strong downward pressures on pay. However it does mean that policy should not focus on these issues to the exclusion of productivity growth – strategies that focus both on productivity growth and on policies to promote inclusion are likely to have the greatest impact on the living standards of middle-income Americans.