Yves here. This article describes how the complexity of tasks and level of workforce skills has been falling in US “entrepreneurial” manufacturing companies.

I am sure readers can point to causes. One is that engineering (ex perhaps petroleum engineering) has become less attractive. When I went to business school, about 40% of my classmates had engineering undergraduate degrees and has worked for manufacturing companies. Recent engineering graduates have said in comments that pay levels for college graduates aren’t high enough to justify the cost of the degree; they generally need to get graduate training, like a law degree, to earn an adequate income (and that of course also means working only incidentally as an engineer). Another obvious drain is that mathematicians and physicists have been hoovered up by Wall Street firms and hedge funds since the mid-late 1980s, and more recently, by surveillance state players like Google.

But another factor is the way outsourcing has destroyed skilled blue-collar jobs. One example I’ve mentioned from time to time is furniture. It makes little sense to ship wood from the US or Canada to China for furniture manufacture to have finished or ready-to-assemble goods sent back, yet that is overwhelmingly how we do it. I know an executive from a major you’d-recognize-the-name furniture maker who outsourced their production to China. She said the case was weak, and that for all but the lowest-end furniture manufacturers, you would have done better by investing in just-in-time manufacturing techniques instead. But Wall Street would boost the stock price of companies that announced outsourcing plans, so they went that way instead.

By Meghana Ayyagari, Associate Professor at the School of Business and Elliott School of International Affairs, George Washington University and Vojislav Maksimovic, William A. Longbrake Chair in Finance and Professor of Finance, University of Maryland; Research Affiliate, Snider Center for Entrepreneurship. Originally published at VoxEU

Recent press reports have highlighted the decline of US entrepreneurship. Using data on workers in 800+ occupations in over 1.2 million establishments, this column shows that there has been a decline not only in the number of new businesses in US manufacturing, but also in their size and quality. The proportion of cognitively demanding tasks at new firms has been declining substantially over time, pointing to a process of technological polarisation as incumbents upgrade human capital while entrants focus on low-skilled niches.

Is the US giving up on manufacturing entrepreneurship? Recent business press reports highlight the decline of US entrepreneurship with ominous headlines such as “US economy: Decline of the start-up nation” (Fleming 2016), “Why America stopped being a start-up nation” (Smith 2016), and “A start-up slump is a drag on the economy” (Casselman 2017). Academic research has shown that, indeed, firm start-up rates declined from around 13% in the early 1980s to 10% before the Great Recession and eventually 8% by 2012 (Pugsley and Sahin 2015). This is worrying since young firms are considered to be the engines of growth and job creation in an economy (Adelino et al. 2017, Haltiwanger et al. 2013). Adding insult to injury, the US has long been considered a nation of entrepreneurs, boasting the best financial institutions for young firms to flourish (e.g. Lerner 2002, Kerr and Nanda 2009).

Largely missing from the discussion is an evaluation of whether the decline in entrepreneurship rates is accompanied by a change in the skill type of entrepreneurs, and whether this has long-term consequences. Moreover, a related concern has been the effects of globalisation and foreign competition on US businesses, particular those in manufacturing. In recent contributions, Autor et al. (2013), Pierce and Schott (2016), and Acemoglu et al. (2016) among others, have shown that the effect of foreign competition has been more severe than previously believed. Are these effects particularly severe of new firms?

In a recent paper, we focus specifically on the skillsets of entrepreneurial firms with five or more employees, and how they have changed through time (Ayyagari and Maksimovic 2017). Using over 3 million establishment-occupation-level observations, we seek to answer the following questions:

To examine these questions, we use administrative establishment-level data from the Occupational Employment Statistics by the US Bureau of Labor Statistics, which provides employment and wage data on workers in 800+ occupations in over 1.2 million establishments triennially over the period 2005-2013. The Quarterly Census of Employment and Wages further allows us to track the employment outcomes of these firms over time. To measure the firm’s skill-level, we use the Department of Labor’s Occupational Information Network database to order the occupations from low to high levels along the following six dimensions: complex problem solving, non-routine cognitive analytical, routine manual, interacting with computers, offshoring, and probability of computerisation. These six measures capture both the abilities of workers and the nature of tasks in different occupations. We observe each firm’s occupational profile, and are thus able to estimate the firm’s stock of human capital at various points in time along these six dimensions

We show that over the 2005-2013 period, there was a decline not only in the number of new businesses in US manufacturing, but also in their size and quality, measured by the tasks which their workforce performs. On the horizontal axis in Figure 1, we plot the average complex problem-solving skills of employees of surveyed establishments, estimated on the basis of their job descriptions (by the Bureau of Labor Statistics) at the beginning of our sample period. On the vertical axis we plot the growth rate of the number of establishments over the period 2005-2013, with separate curves for entrants and incumbent firms. The figure clearly shows that the number of highly skilled entrants fell dramatically over this period, whereas the number of low skilled entrants grew, also dramatically. Changes in the skills of incumbent establishments are much less pronounced. 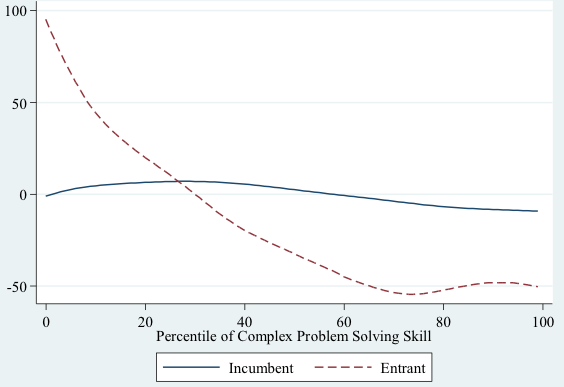 Figure 2 shows that entrants are, on average, performing a higher proportion of routine manual tasks and a lower proportion of tasks that require high cognitive skills, such as complex problem solving. As is evident, incumbent firms do not show the same decline in average skills. We obtain similar differences with locational and industry controls in our preferred regression models. The figure also shows that the differences between incumbents and entrants are growing over time. This has significant long-term consequences – we show that the founding stock of human capital in entrants is predictive of their future human capital as well as growth rates over the early life cycle. 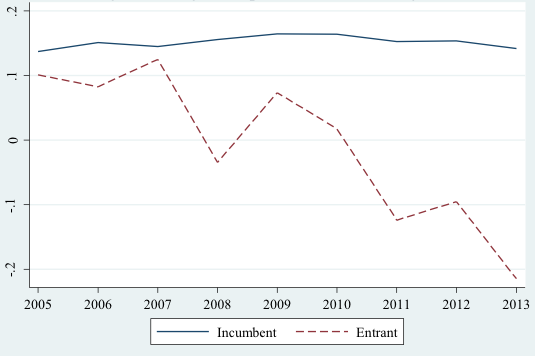 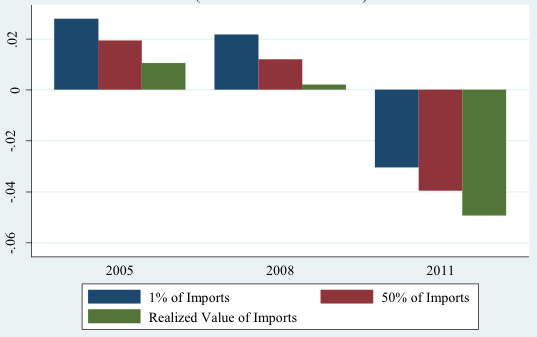 The contrast between entrants and incumbents is most stark in their reactions to a competitive threat from Chinese imports. While incumbent firms upgrade their human capital in response to increased competition, the quality of the entrants is minimally affected. As the level of imports increases, more skilled incumbents grow faster than incumbents with lower skills. While these competitive effects on skills are economically significant, the skill differential between entrants and incumbents would exist even with a total cessation in imports, as seen in Figure 3. Thus, the decline in entrepreneurial quality in US manufacturing is only partially responsive to the level of Chinese imports into the country.

Our results are consistent across the measures we use – entrants score lower on skillsets that load heavily on cognitive skills such as complex problem solving and non-routine cognitive analytical, and higher on skillsets such as routine manual, which are more likely to be made obsolete with continuing automation. It is also notable that tasks performed by entrants load heavily on our offshoring measure, in contrast to the incumbents. Only in high-tech manufacturing industries are these effects muted.

At first glance, one might be tempted to view the drop in perceived quality of entrants as a consequence of new technologies adopted by entrants optimally requiring a less-skilled workforce. While we cannot rule this out, it is unlikely to be the case given that new establishments created by incumbent firms, which are likely to be better funded and able to acquire new technologies, do not show similar deskilling.

Our findings are consistent with technological polarisation, whereby incumbent firms upgrade their human capital, and entrepreneurial firms are finding investment opportunities in niches employing less skilled labour. There is some evidence in our paper to suggest that incumbents are becoming less engaged in routine manual tasks, which are being taken up in greater numbers by entrants. This polarisation is particularly stark in industries facing import competition where incumbents are upgrading their human capital most, both in their legacy plants and in the new plants they construct. One ray of sunshine is that the polarisation is much less evident in high tech industries.