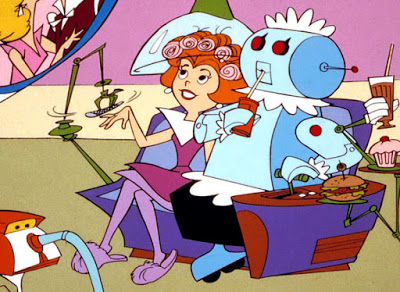 The Jetson’s life in one is which so little work is done by humans that leisure time has expanded exponentially and no one is poor. In the image above, even the robot maid has robots to serve her. What’s the unspoken assumption behind the Jetson’s world?

the swarthy Furies stalk the man
gone rich beyond all rights
–Aeschylus, Agamemnon

I’m about to start writing about the new proposal from Stephanie Kelton and her colleagues at the Levy Institute on the guaranteed jobs program, a proposal, by the way, that’s starting to get some serious notice.

But ahead of that work I want to consider an extreme case, but not an unlikely one. What if, in the future, there simply aren’t enough jobs for everyone? What then?

Put more simply, what’s the underlying assumption behind the world of the Jetsons? The late Stephen Hawking, in his last Reddit AMA appearance, has the answer.

Here’s what was asked of Stephen Hawking in that last AMA session by one Reddit questioner (emphasis mine):

I’m rather late to the question-asking party, but I’ll ask anyway and hope. Have you thought about the possibility of technological unemployment, where we develop automated processes that ultimately cause large unemployment by performing jobs faster and/or cheaper than people can perform them? Some compare this thought to the thoughts of the Luddites, whose revolt was caused in part by perceived technological unemployment over 100 years ago. In particular, do you foresee a world where people work less because so much work is automated? Do you think people will always either find work or manufacture more work to be done? Thank you for your time and your contributions. I’ve found research to be a largely social endeavor, and you’ve been an inspiration to so many.

A fascinating question. But first a note: Technological unemploymentis the term for exactly what we mentioned at the beginning, “the loss of jobs caused by technological change.” As Wikipedia explains, “Such change typically includes the introduction of labour-saving ‘mechanical-muscle’ machines or more efficient ‘mechanical-mind’ processes (automation).”

Wikipedia continues: “Historical examples include artisan weavers reduced to poverty after the introduction of mechanised looms. During World War II, Alan Turing’s Bombe machine compressed and decoded thousands of man-years worth of encrypted data in a matter of hours. A contemporary example of technological unemployment is the displacement of retail cashiers by self-service tills [automated checkout machines].”

It’s hard to imagine a world without enough jobs if you’re living reasonably comfortably in the U.S. But consider India, to pick just one example. What could possibly happen in the Indian economy that would allow its 1.3 billion people — a population four times the U.S. population — all to live “reasonably comfortably”? India already doesn’t have enough good jobs for its people — and that’s before considering the the pressures of automation.

Considered globally, there are already not enough jobs in the world for all the people in it.

But the problem posed by job-killing automation (robots, in the popular imagination) still needs a solution. What if, even in developed countries, the average number of working hours available is fewer than eight per day, perhaps far fewer?

This is Stephen Hawking’s answer, and it’s the same solution in the future case of mathematically too few jobs as in the present case (emphasis mine):

If machines produce everything we need, the outcome will depend on how things are distributed. Everyone can enjoy a life of luxurious leisure if the machine-produced wealth is shared, or most people can end up miserably poor if the machine-owners successfully lobby against wealth redistribution. So far, the trend seems to be toward the second option, with technology driving ever-increasing inequality.

In a world where more and more people are squeezed by fewer jobs, lower-paying jobs, and the relentless flow of newly created wealth into fewer and fewer hands, the only solution is, as Hawking says, “wealth redistribution.” The alternative is stark: organized society will simply crumble into poverty — and in my view, rebellion.

The Most Dangerous Time for Our Planet: How Will Elites React?

I’ve been saying that both the U.S. and the rest of the world are in a “pre-revolutionary state.” Hawking, in an earlier Guardian article, says something similar. He calls the increasing inequality “socially destructive,” and for that and other reasons names this “the most dangerous time for our planet”:

The concerns underlying these votes [Brexit and the election of Donald Trump] about the economic consequences of globalisation and accelerating technological change are absolutely understandable. The automation of factories has already decimated jobs in traditional manufacturing, and the rise of artificial intelligence is likely to extend this job destruction deep into the middle classes, with only the most caring, creative or supervisory roles remaining.

This in turn will accelerate the already widening economic inequality around the world. The internet and the platforms that it makes possible allow very small groups of individuals to make enormous profits while employing very few people. This is inevitable, it is progress, but it is also socially destructive.

We need to put this alongside the financial crash, which brought home to people that a very few individuals working in the financial sector can accrue huge rewards and that the rest of us underwrite that success and pick up the bill when their greed leads us astray. So taken together we are living in a world of widening, not diminishing, financial inequality, in which many people can see not just their standard of living, but their ability to earn a living at all, disappearing. It is no wonder then that they are searching for a new deal, which Trump and Brexit might have appeared to represent.

Hawking identifies the solution. He does not call for reaction and resistance by the ruled, since he considers the Brexit vote and the election of Trump already to be reactions to inequality. He calls instead for intelligent response by those with actual power, the elites themselves:

What matters now, far more than the choices made by these two electorates, is how the elites react. Should we [he considers himself, correctly, one of the “cultural elites“], in turn, reject these votes as outpourings of crude populism that fail to take account of the facts, and attempt to circumvent or circumscribe the choices that they represent? I would argue that this would be a terrible mistake.

I agree with his last statement above. I’ve been putting it this way:

If the rich are determined to extract the last drop of blood … expect the victims to put up a fuss. And don’t expect that fuss to be pretty.

When all power belongs to the state and the rulers who guide it, the people can only make their needs known. And if those needs are ignored, all they can then do is destroy the world of their betters, prior, perhaps, to taking power themselves, an event which often never occurs. In the face of elites resistance, especially extreme resistance, only destruction of the old will allow the powerless to create the new, if that’s indeed what they do. 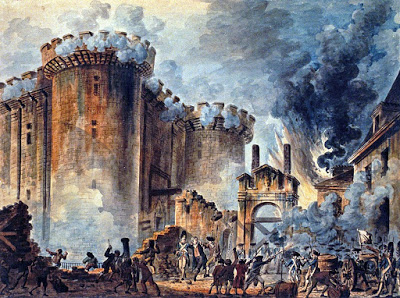 The most orderly modern form of “taking power for themselves” occurred in 2016 — the electoral rebellion against the Clintonist-Obamist neoliberal rulers of the Democratic Party by people supporting Bernie Sanders. That revolt was put down, as Party elites pulled every lever available to retain control.

There may be one more orderly, electoral attempt in 2020 — or not; the choices may be miserable. But if it does occur, unless elites stand down, unless the next electoral rebellion is permitted to succeed, the popular response to failure won’t be electoral, and could be decidedly disorderly.

Hawking, the “enormous optimist,” puts the problem faced by the elites more politely: “We can do this, I am an enormous optimist for my species; but it will require the elites, from London to Harvard, from Cambridge to Hollywood, to learn the lessons of the past year. To learn above all a measure of humility.”

I, the less-than–optimistic, nevertheless agree with him. It does indeed take “enormous optimism” to think that a class of people defined by their hubris will learn “a sense of humility.” Jamie Dimon, beware.