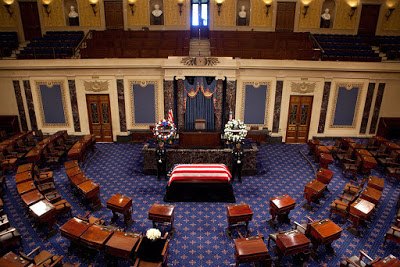 Imagine this room half empty whenever the Senate tried to vote.

Each House shall be the Judge of the Elections, Returns and Qualifications of its own Members, and a Majority of each shall constitute a Quorum to do Business
– U.S. Constitution, Article 1, Section 5

[Update: Since publishing this piece, I’m reminded that Alabama Democrat Doug Jones defeated Republican Roy Moore in a special election earlier this year. My bad for the oversight. However, this makes the partisan divide even more favorable to the Democrats — 50-49. Fifty senators is not a majority. It would take a truly unusual ruling by the Parliamentarian to allow the Vice President to help constitute a quorum, and even if he did so rule, Democrats would then be in position to tie to their Senate chairs not only all Republican senators, but Vice President Mike Pence as well. In other words, the Democrats’ hand is even stronger.]

I’m going to expand on this in a longer piece, but the point is too important not to pass on now. If Democrats are truly serious about blocking any Trump-nominated Supreme Court justice, there is a way. But they have to actually want to block the nomination, not just say they want to.

How To Block the Nomination

This strategy, which I’m convinced will work, comes via Vox writer  Gregory Koger. It goes like this. According to the Constitution, Article 1, Section 5:

Each House shall be the Judge of the Elections, Returns and Qualifications of its own Members, and a Majority of each shall constitute a Quorum to do Business

This means: Neither house of Congress can do business without a quorum, defined as a simple majority.

What if a majority is not present? Section 5 continues:

a smaller Number may adjourn from day to day, and may be authorized to compel the Attendance of absent Members, in such Manner, and under such Penalties as each House may provide.

This means: If there’s no majority present, the minority can compel absent members to attend. But how? Here’s there’s no answer, and in fact nowhere in our government is there a mechanism but shame for compelling congressional attendance.

This gives Democrats, or Republicans for that matter, all the power they need, assuming the numbers work out right.

Now consider the numbers. If there were 60 Republican senators, Democrats could absent themselves forever and nothing would change. Sixty senators comprise a quorum.

But look at the current Senate. There are 46 Democrats, two independents who caucus as Democrats, and 52 Republicans. Yet one of those Republicans, John McCain, may never attend another Senate session due to his health. That puts the partisan split at 51-48.

As Koger notes, “Other than quitting for the day or calling for others to come to the chamber, the Senate can do nothing without a majority of its members — 51 senators — participating in a vote. No bill can pass, no amendment can be decided on, no nominations can get approved.”

In other words, every Republican senator would have to appear for every vote from which Democrats were wholly absent, or no vote could be taken. Every one of them. Democrats could simply challenge the vote for lack of a quorum, then leave during the quorum call.

Shutting Down the Senate

If the plan were for Democrats to be absent en masse just for the vote on Trump’s Court nomination, the plan would fail. On the day of the vote, 51 Republican senators would show up to vote yes and the nomination would be confirmed.

But if Democratic senators were absent en masse from day one of the decision to do it — if all 48  Democratic and independent senators refused to enter the chamber for any vote at all — it would paralyze the Senate. Every vote of the Senate, from the most important to the least, would require every Republican to be present to ensure passage.

In the ideal world this isn’t a problem, since there are, just barely, a quorums-worth of Republican senators. In the real world, however, there is almost never a day in which every senator is present for a vote. Democrats could even force a quorum call any time they wanted on a simple procedural vote, forcing Republicans to be nearby and available at a moment’s notice. When would they fundraise? When would they meet with lobbyists?

It’s almost certain Republicans couldn’t conduct Senate business under those conditions. This move would put Democrats in a position of unblockable power until a future election changed the numbers. They could force — not ask, but force — the nomination to wait until after the 2018 election.

All they’d have to do, is want to.