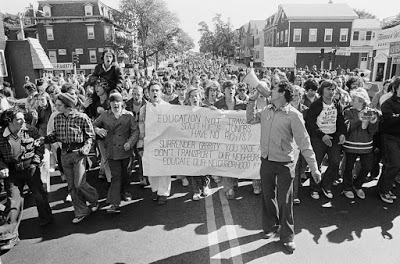 A South Boston anti-busing protest in the 1970s (source)

As a new Democratic insurgency has risen over the last year, unions have clung tightly to the old guard.
— Aida Chávez & Ryan Grim, The Intercept

The modern progressive movement is far and away a very good friend of labor. The labor movement, on the other hand, seems far less a friend of progressives.

This varies from union to union, of course, and also within unions. There are many pro-progressive unions and union members. National Nurses United, for example, strongly supported Bernie Sanders in the 2016 Democratic primary, and unions with many pro-Sanders members endorsed Clinton because their leaders unilaterally chose to do so.

Yet it seems that in the aggregate, organized labor has an anti-progressive tilt. That’s not the news though, just an observation. The news is that, for the first time in a while, progressives are noticing this fact, wondering in public what it might mean, and quietly asking each other what they should do about it.

My own comment: sure took a while. This problem has been obvious for quite a long time. But let’s stick to the facts for today, look at the questions and leave the answers for later.

First, Aida Chávez and Ryan Grim raise an interesting question at The Intercept (see headline below). Note that not only is the underlying story — the union behavior — interesting, but also that this question is being asked at all:

Carpenters, Steamfitters, and Other Trade Unions Coalesced Around Notorious Ferguson Prosecutor. Why?

It’s common for police unions to support prosecutors, but the labor groups who backed McCulloch came from the trade union movement: steamfitters, carpenters, electrical workers, and others with no obvious connection to the criminal justice system. Their support came in the form of both endorsements and campaign funds. The unions pumped in at least $25,000 of the $237,000 McCulloch raised during the campaign, arguing that his longtime support of organized labor deserved loyalty.

It’s not just the racist Bob McCulloch whom many unions support; this is “an emerging pattern” (emphasis added):

As a new Democratic insurgency has risen over the last year, unions have clung tightly to the old guard. In New York, they sided with Rep. Joe Crowley over Alexandria Ocasio-Cortez, and with Gov. Andrew Cuomo over Cynthia Nixon, even walking out of the Working Families Party on his orders. (In Missouri, the WFP supported Bell.) And the union backing is not limited to incumbents. Unions were firmly behind Gretchen Whitmer, who defeated Abdul El-Sayed in Michigan’s gubernatorial primary, for instance, and with Brad Ashford, a conservative Democrat who lost to insurgent Kara Eastman in an Omaha, Nebraska, congressional primary.

Next, let’s turn to the climate front. Among retweets of progressives like Robert Reich by the United Mine Workers Twitter account, we find this response to progressive critics of the DNC’s recent “all of the above” strategy of taking money from fossil fuel companies:

Let’s break this down. The DNC wants to keep feeding at the fossil fuel company trough. Progressives object to that and campaign to stop it. The UMW objects to progressive pushback and says to progressives, in effect:

As a statement of “we just don’t like you,” this seems pretty clear, and not that far from a conversation that goes like this:

The three unions most opposed to oil and gas pipeline protests are the Operating Engineers (heavy equipment operators), Pipefitters and Laborers (LiUNA), whose president interestingly called those protestors “thugs.”

It’s true that not all unions take these stands, and one could argue in defense of those that do that they’re just protecting jobs. But is that really all that’s going on? Or is it also true that, when it comes to progressives and their values, they’re just opposed on principle?

I’ll close with two more thoughts. As Chávez and Grim point out, police unions naturally support prosecutors and the “criminal justice system.” But is there not also a racial component to their support for obvious racists like like Bob McCullogh? If so, what values do these unions and those like them represent — true criminal justice, or something else? After all, actual justice would look like … justice.

Second, as noted above, the leadership of most large unions supported Hillary Clinton against Bernie Sanders despite Sanders’ lifelong and consistent support for workers and unions. As Elizabeth Bruenig asked in 2015, “So why are the very unions that give Sanders money hesitant to lend him their endorsements?”

Again that question, which brings us back to the question posed at the beginning: Why would unions that have nothing to do with criminal justice support a vengeful racist prosecutor like Bob McCulloch? Corrupt Joe Crowley? Powerful, corrupt Andrew Cuomo? Blue Dog Brad Ashford? And so many similar others?

These aren’t answers, only questions, but questions in need of asking.

As you ponder them consider both aspects of this issue. The problem isn’t simply why so many unions oppose progressives. It’s also, what should progressives, in their unbending support for unions, do about it? After all, if a progressive transformation of the nation is not just desirable but critical to our survival, how should those working forthat transformation deal with those working against it?

More pointedly, should anti-progressive unions be treated as allies, simply because they’re unions?

One more thing to watch as national problems grow worse, the need for solutions grows urgent, and progressives, or at least a few of them, take a brand new look at an old and seemingly unsolvable dilemma.