Tesla never ceases to astound with its hype and promises and with its results that are just mindboggling, including today when it reportedits Q2 “earnings” – meaning a net loss of $718 million, its largest net loss ever in its loss-drenched history spanning over a decade. It was more than double its record loss a year ago: 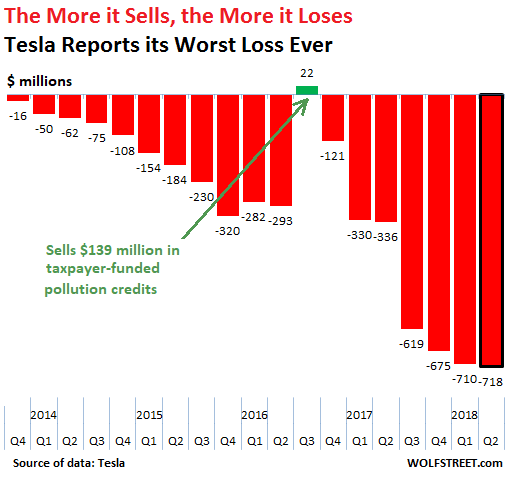 The small solitary green bump in Q3 2016 wasn’t actually some kind of operational genius that suddenly set in for a brief period. No, Tesla sold $139 million in taxpayer-funded pollution credits to other companies, which allowed it to show a profit of $22 million.

Tesla adheres strictly to a business model that is much appreciated by the stock market: The more it sells, the more money it loses.

Total revenues – automotive and energy combined – rose 43% year-over-year to $4.0 billion in Q2. This increase in revenues was bought with a 113% surge in net losses. When losses surge over twice as fast as revenues, it’s not the light at the end of the tunnel you’re seeing.

In between the lines of its earnings report, Tesla also confirmed the veracity of the many videos and pictures circulating on the internet that show huge parking lots filled with thousands of brand-new, Model 3 vehicles, unsold, undelivered, perhaps unfinished, waiting for some sort of miracle, perhaps needing more work, more parts, or additional testing before they can be sold, if they can be sold.

But these thousands of vehicles were nevertheless “factory gated,” as Tesla said, to hit the 5,000 a week production goal. And so they’re unfinished and cannot be delivered but are outside the factory gate, and Tesla didn’t totallylie about its “production” numbers.

Sure, some are in transit, etc.

But this discrepancy started with the Model 3. In Q1, Tesla “produced” 34,494 vehicles and delivered 29,997 deliveries. In other words, it “produced” 4,497 more vehicles than it delivered.

In Q1 and Q2 combined, Tesla “produced” 87,833 vehicles and delivered 70,765 vehicles. The difference: 17,068 vehicles. They’re now stuck on various huge parking lots somewhere. How unfinished or problematic are these cars? When can they be sold? Canthey all be sold?

If they’re all Model 3 vehicles with an average cash price of $50,000, then Tesla has $850 million tied up in these unfinished cars.

This is the result of its unabated “manufacturing hell,” as CEO Elon Musk had aptly called it, combined with the absolute and existential necessity to do whatever it takes to pump up its stock price.

Those touted production numbers of 5,000 vehicles a week were used to keep shares from collapsing. So 17,000 unfinished vehicles were “factory gated” over those two quarters and are now sitting outside the factory gate but cannot be sold. Compare this to the 18,449 Model 3 vehicles Tesla claims it “produced” in Q2.

SEC, are you checking into this?

Then there’s the horror story of cash flow. Tesla burned $812 million in cash in the quarter: $130 million in its operations and another $682 million with “capital expenditures,” “payments for the cost of solar energy systems, leased and to be leased,” and “business combinations.”

It also raised $399 million in various financing activities, including from borrowing and the sale of asset-backed securities.

On net, its cash-burn less the money it raised pulled down its total cash-on-hand by $436 million in three months, to $2.24 billion as of June 30.

Tesla has borrowed a lot of money from a lot of folks: $942 million from its customers via deposits; $11.6 billion in long-term debt and capital leases, including the current portion; and $2.6 billion in “other long-term liabilities.”

Oh, I almost forgot: In the overall global auto market, Tesla gets lost as a rounding error. It’s total deliveries in the quarter of 40,768 vehicles amount to a market share of about 0.2% of the 20 million or so cars delivered in Q2 globally.

Tesla is just an amateur niche manufacturer in a world full of pros. And that would be OK, except for its idiotic market capitalization of around $50 billion, its ballooning mega-losses, its cash-burn, and the fact that it is jimmying its production numbers in an existentially desperate effort to pump up its share price.

GM, Fiat Chrysler, and Ford all got ugly in unison, in one day, something we haven’t seen since the Financial Crisis. Read…  Carmageddon in Detroit