Tesla shares fell 2.8% to $280.74 on Wednesday. They’re now down about $100 from the closing price of August 7 ($379.57) and down $107 from the high that day ($387.46). This was the moment when CEO Elon Musk had pulled another rabbit out of the hat during trading hours in order to brazenly manipulate up the share price by announcing a blatant lie– that he’d take the company private at $420 a share, “funding secured.” Today, shares closed $240 below the buyout-lie number.

The ludicrousness of his lie that had instantly spread all over the world had an unintended consequence for eons to come: The term “funding secured” can never again be pronounced with a straight face.

As a consequence, Tesla is now steeped in legal issues. It’s not like it doesn’t have enough issues already, with its “manufacturing hell,” as Musk himself called it, that refuses to abate.

A CEO is supposed to right a listing ship. But Musk can’t even right himself. Just today it came out that he’d called the British cave diver who’d helped save the boys soccer team in Thailand a “child rapist” in an idiotic email to Buzzfeed. In August, he’d called the cave diver a “pedo guy” only to delete that tweet and apologize. In other words, this CEO, who’d always been a loose cannon, has gone completely over the edge – publicly, for all to see, even Tesla bondholders.

And those bondholders have taken note. The $1.8 billion in senior unsecured notes, due in 2025, that Tesla sold in August 2017 fell to a record low of 85.69 cents on the dollar today. Investors that acquired them at issuance are down over 14%. This chart via FINRA and Morningstar depicts the entire life of those bonds: 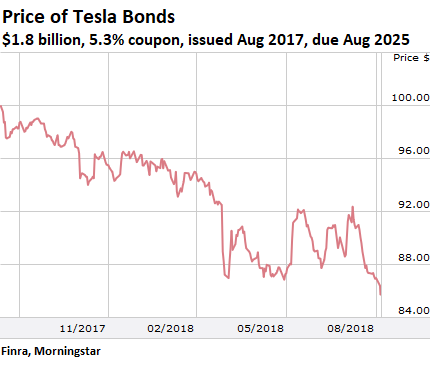 This comes as Tesla’s suppliers are also beginning to fret. For the smaller among them, exposure to Tesla is an existential experience.

When Tesla issued them, investors were enticed by Musk’s hype and Tesla’s razzmatazz, and they thought that all this will work out somehow, and that the Model 3 was going to save the company instead of bleeding it to death, and that 5.3% yield looked soooo good.

Now they’re deeply in the hole. These bonds are unsecured, and in an event of default, recovery may not be anything to write home about. But don’t cry for the bondholders. No one forced them to believe Musk’s BS. They did this on their own volition.

In terms of the survival of Tesla, however, this poses a problem.

Tesla is a high-performance cash-burn machine. It must raise ever larger amounts of cash to fuel this machine. The ability to raise more cash has been predicated on the mutual guarantees of sorts offered by bondholders and shareholders to each other.

For bondholders, Tesla’s sky-high stock price, and therefore its ability to sell more shares and raise more money with ease was a guarantee that Tesla can always issue more shares and use the proceeds to service its debt.

And for shareholders, the eagerness of bondholders was a guarantee that Tesla could always raise money by issuing more cash, thus minimizing the dilution of existing shareholders.

At today’s closing price of those bonds, the implied yield is 8.03%. In other words, if Tesla had to raise money today by selling bonds, it would have to pay over 8% interest on this debt. If it has to raise $2 billion at 8%, it would add $160 million per year in interest to the consumption of its cash-burn machine.

Investors see this too, and as they get more skittish, Tesla may be looking at having to offer 9% or more in interest in order to entice them to take these ever more glaring risks – which now include an erratic, loose-cannon CEO that has gone completely nuts.

Tesla’s share price is still ludicrously high at $280. So at the moment, if it issues $2 billion in new shares, instead of selling debt, Tesla would save a lot of interest expense going forward. But now that the hype is no longer working as before, such an announcement could drive down the share price by a big chunk, making that undertaking a lot more expensive and dilutive for existing shareholders. To avoid this fate, they might be tempted to unload the shares before this happens, which would drive down the share price even further, thus whittling down the guarantee as seen by bondholders, which makes them even more skittish – and in unison, potential bond buyers and share buyers become even more reluctant. But their cash is needed to fuel the cash-burn machine…. You get the idea. This is going to be a mess.

After Musk admitted the other Friday night that his “funding secured” deal had been a blatant lie all along, all kinds of things did nothappen the next Monday. You’ve got to hand it to Musk. Read… 7 Things that Did Not Happen to Tesla & Musk after the Friday-Night Deal-Massacre