Yves here. While I appreciate J.D. Alt using Hurricane Florence as a reminder of the need to push back against economically illiterate balanced-budget fetishism, Alt makes an assumption that I imagine will rankle with many NC readers, that these communities should be rebuilt. The US is failing to come to grips with the need to move people out of coastal areas that will suffer more and more as climate change progresses. If nothing else, people need to be paid to leave.

By J. D. Alt, author of The Architect Who Couldn’t Sing, available at Amazon.com or iBooks. Originally published at www.realprogressivesusa.com

What you believe America can build—or rebuild—as a collective society hinges on how you answer one fundamental question: When the U.S. government issues a treasury bond, is it “borrowing” money that must be repaid with future tax-dollars—or is it “creating” money that can be spent to accomplish big and important collective goals?

Getting the right answer to this question could be existentially important. As I’m writing, for example, Hurricane Florence is unleashing historical damage to the U.S. Atlantic coast and inland areas. Over the next weeks and months, the inevitable debate will unfold over how much America can afford to “pay” to make the lives of tens of thousands of families and thousands of local communities whole and functional again. This time, perhaps, the debate will go even further: it might begin to earnestly ask the bigger questions about the future of our coastal cities and infrastructures in an unfolding era of climate change. These bigger questions will not involve billion-dollar budgets, buttrillionsof dollars of federal expenditures.

This is why my opening question is so important. What we can allow ourselves to do—indeed, what can we payourselves to undertake and accomplish as a collective society—depends on the answer.

Before examining the question in more detail, let’s outline the basic puzzle we’re talking about. The U.S. treasury is the spending apparatus of the federal government. Congress democratically agrees upon and tells the treasury what to spend money on, and the treasury duly spends the necessary dollars. If it does not have enough dollars in its tax accounts at the various Federal Reserve banks to meet the expenditures stipulated by Congress, the treasury issues bonds to make up the difference. The bonds are traded (usually to financial institutions) for dollars (bank reserves) which the treasury then uses to pay out the balance of the spending obligations it has been assigned.

This is the common understanding of the puzzle—and the reason most people will initially answer that when the U.S. government issues a treasury bond it is “borrowing” dollars (from the financial institutions who trade for the bond) which must be repaid with future tax-dollars (when the bond matures). What other interpretation could there be? And it’s an interpretation that makes it difficult for America to commit to large, expensive undertakings—such as rebuilding (better and smarter) after a major hurricane, rather than fecklessly dabbing at the wounds (as we’ve done with Katrina, Sandy, Harvey and Maria).

The problem with this “obvious” answer to my question (in addition to the fact that it saddles us with an endless and hopeless austerity) is that, if it were true, the U.S. federal government would not have been able to spend—in real dollars—over $21 TRILLION more, over the years, than it has collected in taxes. For that is, in fact, the case: the national “debt” clock in New York City—which tracks the difference between government spending and tax-collections—currently tallies the number of dollars of over-spending to be $21,477,342,250,762. Are those reallydollars the financial institutions “loaned” to the U.S. government? If so, why aren’t they beating the bushes to get paid back? And if they aren’t getting paid back, why do they continue to “loan” such extravagant amounts of dollars to the government? Finally, does anyone really imagine the U.S. government is going to “repay” that vast sum of dollars by collecting taxes? From several different perspectives, then, the common explanations we think make sense don’t add up.

There is another perspective, however—just a slight shift—which causes all the puzzlement to disappear. Not only that, but it is a perspective that clearly makes it possible for us, as a collective society, to undertake and accomplish things we heretofore have not allowed ourselves to pursue, or perhaps even consider.

This alternative framework answers my opening question as follows: When the U.S. government issues a treasury bond it is NOT “borrowing” money but, instead, is “creating” money. It is not incurring a “debt” that must be repaid with future tax revenues but, instead, is “creating” money that can be spent to pay America’s private sector to undertake and accomplish very large, and important, collective goals.

To see how this answer can be valid, visualize a U.S. treasury bond as a container filled with dollars that has a time-lock on it. When the treasury issues the bond, it comes—already filled—with a stipulated number of “future” dollars, and a time-lock with a stipulated date when those dollars can be accessed. When that date arrives, the lock opens, and you (the bond owner) can take out the new dollars and spend them. Until that date arrives, you cannot put your hands on, or spend, the dollars.

Even though you cannot immediately spend the dollars in the bond, it has a “value” that can be traded (if you choose to do so) for dollars you can spend now—but at a discount. This means that if your bond contains, say, 100 “future” dollars, someone might give you only 90 “present” dollars in trade for the bond. They might then choose to hold the bond until the time-lock opens, whereupon they’d remove the 100 dollars—making 10 dollars in profit.

This is essentially what occurs when the U.S. treasury initially issues the bond: It trades the bond (containing a stipulated number of “future” dollars)—typically to a bank or financial institution—for a discounted number of “present” dollars (reserves) which the bank or financial institution owns. The U.S. treasury then uses those “present” dollars it has received in trade to make payments for things which Congress has authorized it to make: it buys goods and services from the private sector, pays federal employees, sends out social security payments, pays local contractors to rebuild hurricane washed-out roads and fallen power-grids, etc. The “present” dollars the treasury has traded its bond for, in other words, are spent back into the private economy and end up in the bank accounts of private citizens and businesses.

When the treasury bond “matures”—i.e. the time-lock on the container opens—the “future” dollars are then removed and become “present” dollars in the private sector economy. We can diagram this process as follows: 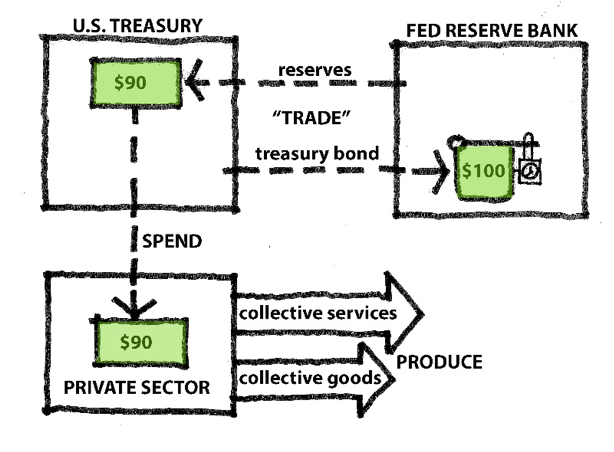 Looking at the diagram there are three important things to see:

You may object that this is sophistry. How can you create something (money) that doesn’t exist? But remind yourself that the U.S. treasury has, in fact, created—and spent—to date over $21 trillionby this very process. Furthermore, the $21 trillion created and spent thus far now resides in the bank and investment accounts of American families and businesses—and the results of much of that spending are real things that have benefited, and continue to benefit, our collective society: roads, bridges, airports, electric grids, satellite networks, health and science research. (The list could obviously go on and on.) Sophistry does not produce concrete results such as these.

As you watch the aftermath of Hurricane Florence unfold over the next weeks and months—and as you listen to the debate about what America can “afford” to do in response to the overwhelming damage imposed upon East coast families, businesses and communities—and as you read the continued news reports about families in Houston still without housing, or the miserable conditions left unaddressed in Puerto Rico—think about the alternative perspective we’ve just diagrammed.

America is not short of money—or the ability to create it as necessary to pay ourselves to undertake and accomplish our most pressing goals. What America is short of is visionary leadership with a true understanding of modern macro-economics.