As an aside, we are already in the midst of emerging market crises. The IMF agreed to give yet another monster bailout to Argentina. Pakistan is seeking an IMF rescue (or more accurately, trying to get shored up by any one other than the IMF but keeping the agency on the front burner in case other options fail). Turkey is still on the ropes. So calling a crisis is trivial because they are on now.

However, many of these writers are presumably anticipating something more like the global financial crisis, and too often are looking in the wrong places. There is a difference between market crashes that don’t impair the financial system, like the dot-com bust, because the assets that fell in price weren’t highly leveraged. You get real economy damage but not a financial crisis. You can also have lots of loans go bad and not impair the banking system because the credit risk was either well distributed among banks and/or significantly shifted onto investors who losses aren’t leveraged back to the financial system.1

However, one of the sources of systemic risk being overlooked is derivatives. That is particularly worrisome since the crisis was a derivatives crisis, and not a housing crisis, as it is too commonly depicted. Even though the US and other housing markets were certain to suffer a nasty bust, a housing crisis alone would have resulted in something like a bigger, badder saving and loan crisis, not the financial coronary of September and October 2008.

Derivatives allowed speculators to create synthetic exposures to the riskiest subprime housing debt that were 4-6 times its real economy value. Those bets wound up heavily at systemically important, highly leveraged financial institutions like Citigroup, AIG, the monolines, and Eurobanks.

As derivatives expert Satyajit Das explained in a recent Bloomberg op-ed, the big post crisis solution to derivative risk, to force most derivatives to be cleared through central counterparties, hasn’t lived up to its promise. Das cites the example of how a single bad energy futures trade by a Norwegian investor recently blew through most of the NASDAQ’s mutual default fund. Even though this particular loss wasn’t consequential in financial system terms, Das argues that it illustrates how derivative risks are alive and well.

The post crisis remedy settled on in 2009 was to require trades to be cleared through central counterparties who would be the ones to assume the credit risk of buyers and sellers. But as Das and others (including your humble blogger) pointed out then, all this did was to move that risk out of banks and big leveraged financial players like hedge funds, and into the counterparties, which themselves are too big to fail entities.2 And even though it is true that a central counterparty will reduce overall credit exposures, as Das has explained numerous times, there is a big gap between theory and practice.

The high concept was that by having dealers all interact with a single counterparty, it would reduce the opacity and complexity of counterparty risk, thus making it easier to manage.* This chart which the Chicago Fed cribbed from the Reserve Bank of Australia illustrates how the world of central clearing is perceived to be an improvement over the old regime: 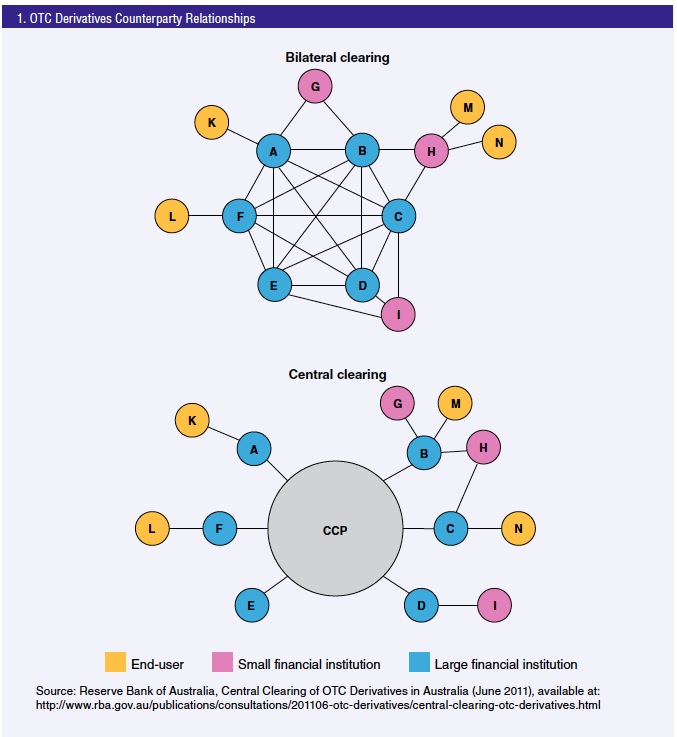 Shorter: banks that provide critical support to the CCP have their own credit exposures; they can become impaired or liquidity constrained and hence fail as major counterparties or as critical backstops in times of stress.

So the high-level conclusion is that CCPs in theory are an improvement over the old status quo, but they need to be implemented well to achieve their promise. Most important, they need to have strong enough capital buffers. Even then, they are not a magic bullet.

Now aside from [the Financial Times’ John] Dizard’s warning, there was reason to be concerned about the motivation for creating central counterparties, in that it was to reduce the “too big to fail” problem. In other words, given the limited, conditional risk reduction that would result, the idea of moving more credit risk to central counterparties was more than anything else to solve a political problem: to get the government out of the liquidity provider of last resort game. If you look at the chart above, those little blue circle in the first chart would be banks that would almost certainly get government support, particularly given that the authorities have allowed banks to use taxpayer deposits to fund derivatives exposures. By contrast, the central counterparty is in theory a more robust entity and does not have direct access to the government drip feed.

But an inadequately capitalized CCP is just another “too big to fail” entity. And since the CCPs are private, there would be motivation for the participants to have the CCP be underresourced, since higher margins mean higher transaction costs and therefore lower trading volumes. And although no one would admit to this, bankers know full well that no financial regulator is willing to let markets seize up in our brave new world of market-based credit, as opposed to bank-loan-based credit.

Third, initial margin-setting relies on risk models — based on assumed price behaviors and historical volatility and correlation data — that have repeatedly failed in the real world….the ability of non-defaulting members to bear losses may be lower than expected. Even single counterparty limits, designed to avoid concentrated exposure, are imperfect, as Norway’s case highlights.

Fourth, central counterparties have adverse incentives. To gain market share, they might undercut each other on margins or default fund contributions, thus undermining the stability of the system itself. The default waterfall also entails moral hazard: Strong firms, forced to bear the liabilities of the weak, have little motivation to become clearing members.

Thees is a small bit of good news. As the Financial Times’ John Dizard described earlier this year, the “derivative” that desperately needed to be slowly strangled, the unregulated insurance misnamed as a credit default swap, is becoming more feeble all on its own. As Dizard wrote in Time to wipe out the absurd credit default swap market:

At least back in 2008, dealing in CDS was sinister or arcane. Now it just seems pointless, what the American military calls a “self-licking ice-cream cone”….

The CDS business is still big but at a time when most markets have been growing (or just inflating), it has been steadily shrinking in notional size. According to the Bank for International Settlements, the notional value of all CDS has declined from about $25tn at the start of 2013 to less than $10tn today.

Even a $10tn black hole could terrify editorialists, policymakers and conference attendees. It has become apparent, though, that most of that is helium in the balloon. Those trillions could only end life as we know it if someone (taxpayers, depositors, investors) had to pay them to someone else (foreign billionaires, Bond villains, New York and London socialites).

With ever-greater frequency, though, CDS participants are being told by the authorities or “determination committees” of market participants that we were just kidding, no one takes this seriously any more. I am inclined to agree with this de-escalation policy, but the problem is that some less knowing market participants may believe the “protection” offered by CDS represents a genuine hedge against risk, which could result in some significantly unbalanced books when there is another global financial crisis….

Can anyone find a way to bury this absurd pseudo-market?

While somewhat reassuring, this development seems to prove out the theory that regulators (or this case, self-regultory bodies) are good at fighting the last war, so a new crisis is unlikely to look much like the one just past. And if anyone were serious about curbing derivatives trading, there’s a simple remedy: a transactions tax. But making that work would require a great deal of international cooperation, and too many financial centers would rather assist their local champions rather than prevent the next bust.

1 That sentence is a bit heavy on finance lingo, so let’s unpack a bit by using a case study. In the 1980s, raiders funded leveraged buyouts using junk bonds and loans. The loans were syndicated, with JP Morgan as the dominant syndicator retaining only a teeny piece and enlisting deep pocket obliging chumps like Japanese banks to provide the funding.

The LBOs in the later 1980s were typically and obviously terrible, but ginormous up-front fees (like $30 million out of a $500 million loan on the Campeau deal) made the banks, which often had bad internal incentives regarding how they treated those fees, kept the money flowing longer than it should have.

So even though many of those loans came a cropper in the nasty early 1990s recession, they didn’t create a financial crisis because the loans were widely held and because they were worked out in most cases, meaning the losses weren’t 100%. One can imagine that bank regulators were awfully permissive in how they allowed banks to value the loans while retructurings were in progress.

By contrast, in the financial crisis, quant and global macro hedge funds would be hit by losses due to wildly gyrating markets. Those trades were often leveraged, as in done on margin. These traders were often forced to liquidate position, or they might dump an asset in completely different market (say gold) that was OK shape to avoid recognizing a big loss on the trade being hit with a huge margin call. The result of dumping either position (in the crashing market or the one that was less afflicted) would be to cause a price move that could then lead other margined players to have to meet margin calls and potentially liquidate positions. If a hedge fund failed (and recall many did, investors who could would also pull out cash, forcing even more liquidation) would deliver losses to exchanges and/or bank lenders. And the investors in those funds might have been levered themselves…

2 Note that exchanges combine transaction-matchign with clearinghouse functions. As we wrote in 2009:

…the cheery view of the safety of exchanges is based on the airbrushing out of a near failure. In the 1987 stockmarket crash, a large counterparty of the Chicago Merc had failed to make a large payment by settlement date, leaving the exchange $400 million short. Its president, Leo Melamed, called its bank, Continental Illinois, to plead for the bank to guarantee the balance, which was well in excess of its credit lines. The officer in charge said no,. It was only because the chairman walked in and authorized the backstop only three minutes before the exchange was due to open that the Merc kept going.

Remember that. One decision with three minutes to spare kept the two biggest exchanges in the US from collapsing in the 1987 crash. See Donald MacKenzie’s An Engine Not A Camera for details.