The vote for Brexit and the election of protectionist Donald Trump to the US presidency – two momentous markers of the ongoing pushback against globalization – led some to question the rationality of voters. This column presents a framework that demonstrates how the populist backlash against globalisation is actually a rational voter response when the economy is strong and inequality is high. It highlights the fragility of globalization in a democratic society that values equality.

The ongoing pushback against globalization in the West is a defining phenomenon of this decade. This pushback is best exemplified by two momentous 2016 votes: the British vote to leave the EU (‘Brexit’) and the election of a protectionist, Donald Trump, to the US presidency. In both cases, rich-country electorates voted to take a step back from the long-standing process of global integration. “Today, globalization is going through a major crisis” (Macron 2018).

Some commentators question the wisdom of the voters responsible for this pushback. They suggest Brexit and Trump supporters have been confused by misleading campaigns and foreign hackers. They joke about turkeys voting for Christmas. They call for another Brexit referendum, which would allow the Leavers to correct their mistakes.

We take a different perspective. In a recent paper, we develop a theory in which a backlash against globalization happens while all voters are perfectly rational (Pastor and Veronesi 2018). We do not, of course, claim that all voters are rational; we simply argue that explaining the backlash does not require irrationality. Not only can the backlash happen in our theory; it is inevitable.

We build a heterogeneous-agent equilibrium model in which a backlash against globalization emerges as the optimal response of rational voters to rising inequality. A rise in inequality has been observed throughout the West in recent decades (e.g. Atkinson et al. 2011). In our model, rising inequality is a natural consequence of economic growth. Over time, global growth exacerbates inequality, which eventually leads to a pushback against globalization.

Besides inequality aversion, our model features heterogeneity in risk aversion. This heterogeneity generates rising inequality in a growing economy because less risk-averse agents consume a growing share of total output. We employ individual-level differences in risk aversion to capture the fact that some individuals benefit more from global growth than others. In addition, we interpret country-level differences in risk aversion as differences in financial development. We consider two ‘countries’: the US and the rest of the world. We assume that US agents are less risk-averse than rest-of-the-world agents, capturing the idea that the US is more financially developed than the rest of the world.

At the outset, the two countries are financially integrated – there are no barriers to trade and risk is shared globally. At a given time, both countries hold elections featuring two candidates. The ‘mainstream’ candidate promises to preserve globalization, whereas the ‘populist’ candidate promises to end it. If either country elects a populist, a move to autarky takes place and cross-border trading stops. Elections are decided by the median voter.

Global risk sharing exacerbates US inequality. Given their low risk aversion, US agents insure the agents of the rest of the world by holding aggressive and disperse portfolio positions. The agents holding the most aggressive positions benefit disproportionately from global growth. The resulting inequality leads some US voters, those who feel left behind by globalization, to vote populist.

When deciding whether to vote mainstream or populist, US agents face a consumption-inequality trade-off. If elected, the populist delivers lower consumption but also lower inequality to US agents. After a move to autarky, US agents can no longer borrow from the rest of the world to finance their excess consumption. But their inequality drops too, because the absence of cross-border leverage makes their portfolio positions less disperse.

As output grows, the marginal utility of consumption declines, and US agents become increasingly willing to sacrifice consumption in exchange for more equality. When output grows large enough—see the vertical line in the figure below—more than half of US agents prefer autarky and the populist wins the US election. This is our main result: in a growing economy, the populist eventually gets elected. In a democratic society that values equality, globalization cannot survive in the long run. 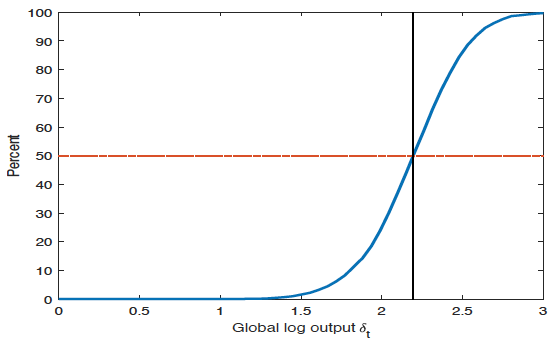 Equality Is a Luxury Good

Equality can be interpreted as a luxury good in that society demands more of it as it becomes wealthier. Voters might also treat culture, traditions, and other nonpecuniary values as luxury goods. Consistent with this argument, the recent rise in populism appears predominantly in rich countries. In poor countries, agents are not willing to sacrifice consumption in exchange for nonpecuniary values.

Globalization would survive under a social planner. Our competitive market solution differs from the social planner solution due to the negative externality that the elites impose on others through their high consumption. To see if globalization can be saved by redistribution, we analyse redistributive policies that transfer wealth from low risk-aversion agents, who benefit the most from globalization, to high risk-aversion agents, who benefit the least. We show that such policies can delay the populist’s victory, but cannot prevent it from happening eventually.

Which Countries Are Populist?

Our model predicts that support for populism should be stronger in countries that are more financially developed, more unequal, and running current account deficits. Looking across 29 developed countries, we find evidence supporting these predictions. 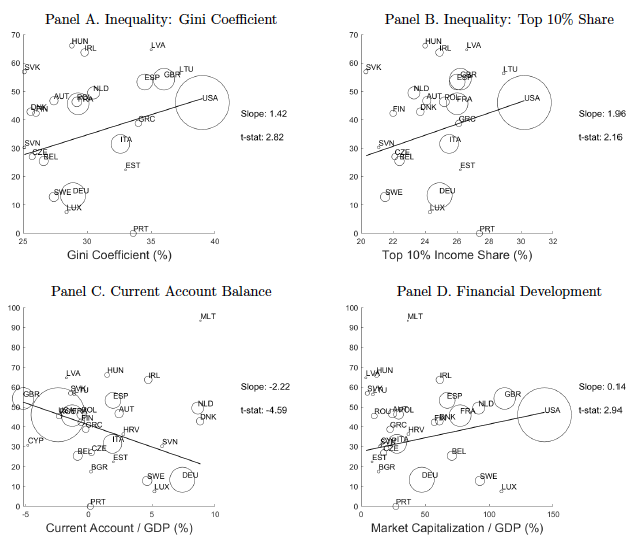 The US and the UK are good examples. Both have high financial development, large inequality, and current account deficits. It is thus no coincidence, in the context of our model, that these countries led the populist wave in 2016. In contrast, Germany is less financially developed, less unequal, and it runs a sizable current account surplus. Populism has been relatively subdued in Germany, as our model predicts. The model emphasises the dark side of financial development – it spurs the growth of inequality, which eventually leads to a populist backlash.

Who are the Populist Voters?

The model also makes predictions about the characteristics of populist voters. Compared to mainstream voters, populist voters should be more inequality-averse (i.e. more anti-elite) and more risk-averse (i.e. better insured against consumption fluctuations). Like highly risk-averse agents, poorer and less-educated agents have less to lose from the end of globalization. The model thus predicts that these agents are more likely to vote populist. That is indeed what we find when we examine the characteristics of the voters who supported Brexit in the 2016 EU referendum and Trump in the 2016 presidential election.

Backlash in a booming economy

In our model, a populist backlash occurs when the economy is strong because that is when inequality is high. The model helps us understand why the backlash is occurring now, as the US economy is booming. The economy is going through one of its longest macroeconomic expansions ever, having been growing steadily for almost a decade since the 2008 crisis.

This study relates to our prior work at the intersection of finance and political economy. Here, we exploit the cross-sectional variation in risk aversion, whereas in our 2017 paper, we analyse its time variation (Pastor and Veronesi 2017). In the latter model, time-varying risk aversion generates political cycles in which Democrats and Republicans alternate in power, with higher stock returns under Democrats. Our previous work also explores links between risk aversion and inequality (Pastor and Veronesi 2016).

We highlight the fragility of globalization in a democratic society that values equality. In our model, a pushback against globalization arises as a rational voter response. When a country grows rich enough, it becomes willing to sacrifice consumption in exchange for a more equal society. Redistribution is of limited value in our frictionless, complete-markets model. Our formal model supports the narrative of Rodrik (1997, 2000), who argues that we cannot have all three of global economic integration, the nation state, and democratic politics.

If policymakers want to save globalization, they need to make the world look different from our model. One attractive policy option is to improve the financial systems of less-developed countries. Smaller cross-country differences in financial development would mitigate the uneven effects of cross-border risk sharing. More balanced global risk sharing would result in lower current account deficits and, eventually, lower inequality in the rich world.