Yves here. This article elides over an issue that it would have helped to make more explicit.

The fact that oil (and other commodity prices) are denominated in dollars does not necessitate that they be settled in dollars. So why has there been, until recently, very little settlement of oil sales in other currencies?

First, agreeing a price in dollars but settling it in two completely different currencies involves either doing currency hedges or trades of each of the two non-dollar currencies with the dollar (meaning you are still stuck with dollar transactions, just a different sort than a straight-up dollar payment) or you have to negotiate with the other party how to price the foreign exchange components, and perhaps also hedge the risk. This is a lot of hassle. Not just one, but both parties to a transaction need to see compelling reasons to work around well-established, low friction, convenient channels (for everyone save parties subject to dollar payment system sanctions….and counterparties who think they might get more favorable terms by engaging in work-arounds.)

A second, less obvious reason is that for a very long time, the US economy was a preferred destination for foreign investments, so oil sellers didn’t mind taking dollars. As Amar Bhide wrote in a 1994 classic in the Harvard Business Review, the US markets were admired around the world for being both the most liquid, but also the fairest and most transparent. The US has far and away the best investor disclosures and protections.

By Elina Ribakova, a Visiting Fellow at Bruegel. Previously, she worked for Citigroup, Amundi (a large European asset manager), Avantium (Emerging Markets dedicated hedge fund) and most recently as Managing Director of Research at Deutsche Bank. Prior to that, Elina worked for nine years in policy making at the International Monetary Fund in Washington DC. Originally published at Bruegel

“It is absurd that Europe pays for 80% of its energy import bill – worth €300 billion a year – in US dollars when only roughly 2% of our energy imports come from the United States,” said President Juncker in his state of the union speech.* Europe’s largest supplier of energy – Russia, who accounts for a third of that bill – couldn’t agree more. Russia’s offer to switch to euros in trade with the EU will likely be costly to implement, but the US switch towards unilateralism is forcing its long-standing partners to question the dollar’s global dominance.

The EU and Russia have strong bilateral trade links: Russia is the EU’s fourth-largest trading partner and the EU is Russia’s biggest. EU-Russia trade has decreased since 2014, as the conflict in Ukraine led to the introduction of EU sanctions on Russia, souring trade and the political relationship.

However, total trade (exports and imports) still stands at an impressive €230 billion per year. Russia remains the largest supplier of natural gas and oil to the EU accounting for 29% of all imports – or roughly €100 billion. The share has remained steady over the last decade.[1] 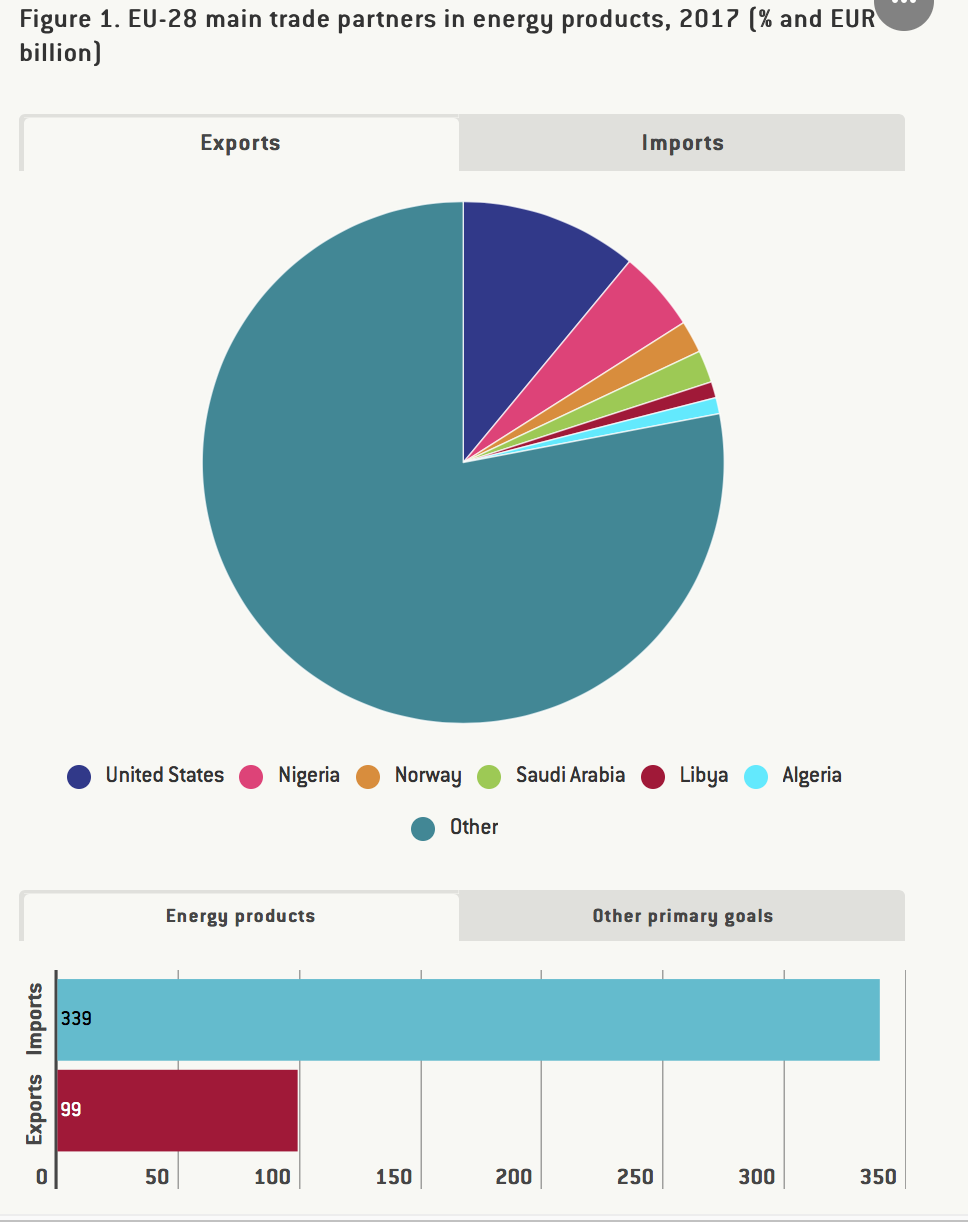 In recent months President Putin, the Russian government, its parliamentarians and the country’s business representatives have all called for “de-dollarisation”. Russia’s motivation towards de-dollarisation is mostly geopolitical. It comes in response to what Russian authorities see as “weaponisation” of the dollar, increasingly entrenched and open-ended US sanctions, and the threat to Russia’s commitments to Iran posed by the US’ unilateral withdrawal from the Iran nuclear deal.[2]

Would Russia’s offer to switch to euro in trade with the EU come with strings attached? It is doubtful there would be any catch – Russian authorities are keen to narrow political gaps with the EU, a region they see as their most important strategic partner and neighbour. Uncertainty and pressure emanating from the US makes Russian authorities keener to find common ground with the EU, and the euro would be an important symbolic common project.

“As we see, restrictions imposed by the American partners are of an extraterritorial nature. The possibility of switching from the US dollar to the euro in settlements depends on Europe’s stance toward Washington’s position… If our European partners declare their position unequivocally, we could definitely see a way to use the European common currency for financial settlements,” proposed Russia’s first deputy prime minister Anton Siluanov at the recent St Petersburg International Economic Forum (Russia Today, May, 2018). As long as there is common understanding and commitment by European partners on wider use of the euro, Russian authorities would be keen to engage.

Significant practical difficulties would need to be addressed, however. First, the vast majority of the trading in oil is still denominated in dollars, while price benchmarks are set on US-based exchanges. Second, liquidity in the euro-rouble currency pair is low. The dollar accounts for 87% of all foreign-exchange trades compared to 31% for euro, and rouble liquidity has fallen sharply since the sanctions took force.[3] Therefore costs would increase due to the introduction of the currency risk into trade contracts. A company or a bank most likely would want to hedge the risk that arises from euro or rouble exposure relative to the dollar-quoted oil benchmarks.

The difficulties might be easier to overcome for gas contracts. Gazprom’s sales to Europe have long relied on long-term contracts with oil-pegged prices and take-or-pay clauses; however, Gazprom has begun using new forms of more flexible contracts, which could present an opportunity should the US introduce sanctions on Gazprom’s operations in Europe – something European politicians so far have condemned.

Despite the difficulties, switching towards euros in trade with Europe is Russia’s most meaningful and realistic opportunity towards de-dollarisation. Russian authorities are considering other options, but there are no quick fixes.

Russia is negotiating with its key trade partners towards increasing the use of national currencies. Only 8% of transactions with China are in renminbi, 22% in roubles and almost 70% in dollars. Russia’s state-controlled bank VTB is the largest market-maker in yuan-rouble and is hopeful the share of transactions will increase.[4]

Russia’s Ministry of Foreign Affairs and the Federal Service for Military-Technical Cooperation would like to see all military contracts in national currencies – starting with Turkey, India and China.[5] Recent secondary US sanctions on Chinese companies that bought military equipment from Russia will likely help speed up the process.[6] Turkey’s President Erdoğan is hopeful that trade with Russia can be settled in national currencies. The Russian Ministry of Finance is ready to offer incentives for non-commodity exporters that switch to transactions in roubles.[7]

Russia has already dramatically reduced its US treasury holdings.[8]According to US treasury data, Russia’s holding appears to be down to $15 billion from $96 billion just two months ago. Unlike other emerging markets that reduced their treasury holdings in order to prop up their own currencies, which had come under depreciation pressure in recent months, Russia’s overall reserves continued to increase and a higher share was allocated to gold and cash holdings.

Reducing reliance on the dollar in government debt and creating domestic-market infrastructure is another key objective. Russia’s total government debt is 14% of GDP; together with its large current-account surplus, balanced budget and growing reserves, it constitutes a big attraction for foreign investors. A share of government debt is denominated in dollars and foreign investor participation in rouble bonds is 26%. Politicians in the US and the UK have suggested putting pressure on the two European clearing houses (Euroclear and Clearstream) to refuse clearing Russian bonds. When Russia issued its first Eurobond post-sanctions, Euroclear at first didn’t agree to clear it. In the most recent Eurobond issue, Russia offered settlement in other currencies (including euro, Swiss franc and sterling) should the dollar be unavailable.

Persuading domestic savers away from (approximately 20%) dollar holdings would take time. The Central Bank of Russia does not stand for any administrative measures to curb domestic use of dollars and stands ready to serve all domestic deposits (about $87 billion) even if access to dollars for the country is suddenly shut off; Central Bank governor Elvira Nabiullina was keen to stress as much during her recent press conference on monetary policy. With reserves at $460 billion, one of the most respected emerging-market central banks can afford to remain calm.[9]

Russia does not see eye to eye with the EU on a wide range of issues too numerous to list. However, the rising unilateralism by the US is encouraging its long-standing partners to question the dollar domination in global markets; here Russian and European interests appear aligned.