This is Naked Capitalism fundraising week. 1202 donors have already invested in our efforts to combat corruption and predatory conduct, particularly in the financial realm. Please join us and participate via our donation page, which shows how to give via check, credit card, debit card, or PayPal. Read about why we’re doing this fundraiser and what we’ve accomplished in the last year, and our current goal, increasing our staffing, also known as burnout prevention. 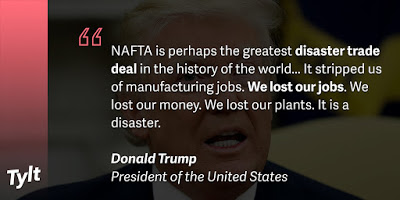 Donald Trump on NAFTA. That was then; this is now.

NAFTA 2.0 is on the horizon, and I wanted to offer an update courtesy of Public Citizen’s Trade Watch, the best go-to source on trade agreement issues. Their infographic is here. Click here for their full analysis. I’m excerpting the relevant details below.

Bottom line: The NAFTA 2.0 draft is a mixed bag and will need fixing. It does improve the original agreement, but not by much.

How does NAFTA 2.0 text measure up against the essential changes we have demanded to stop NAFTA’s ongoing damage?

After a year of North American Free Trade Agreement (NAFTA) renegotiations, the September 30 publication of a revised text revealed some improvements that progressives have long demanded, damaging terms we have long opposed and important unfinished business.

This NAFTA 2.0 text is not the transformational replacement of the corporate-rigged trade-pact model that we have demanded. But if we fight to get swift and certain enforcement of the pact’s new labor standards — and achieve some other key improvements — then the final package Congress will vote on early next year could stop some of NAFTA’s continuing, serious damage to people across North America.

Congress will vote on this agreement next year, providing Democrats with one more opportunity to show millennials that the Democratic Party is worth supporting in 2020. (Nancy Pelosi, take note: you’ll want to oppose this deal.)

I’ve written quite a bit about investor-state dispute settlement clausesin trade agreements. These provisions give “investors” (corporations) the right to sue “states” (sovereign nations) for lost future profits in special trade tribunals, whose decisions cannot be appealed in any nation’s court system. In effect, thanks to ISDS clauses, NAFTA court decisions trump the U.S. Supreme Court — a clear and obvious corporate attack on national sovereignty itself. ISDS clauses must be eliminated in their entirety.

Where does the current NAFTA draft agreement stand with respect to ISDS tribunals? 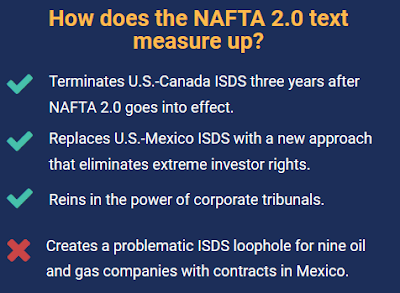 So, some good, some bad. This is a critical issue; again, what’s at stake is national sovereignty versus corporate control. (Full Public Citizen analysis of this issue here.)

Public Citizen wants an agreement that completely eliminates incentives to send jobs to other countries — in NAFTA’s case, to low-wage Mexico. How does the revised draft agreement measure up? 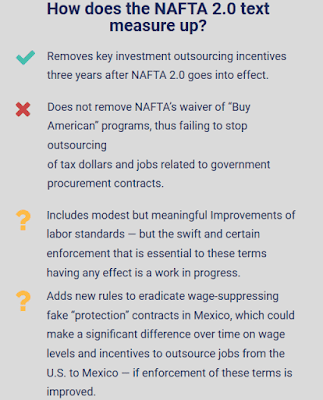 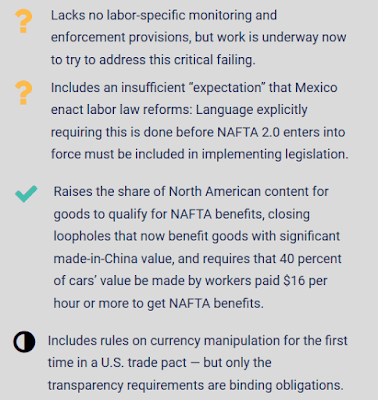 All those question marks above relate to provisions that are good but not enforceable. I’d make them X’s if I were doing the chart, but Public Citizen may be more hopeful than I am of getting them changed for the better. (More analysis of these items here.)

Climate Change and the Environment

The current NAFTA agreement was as terrible for the environment as it was for jobs. Using NAFTA tribunals, corporations could punish (or threaten to punish) nations, states, counties and municipalities for passing and enforcing environmental regulations that cut into corporate profits.

In the new agreement, some of that has changed — but only some: 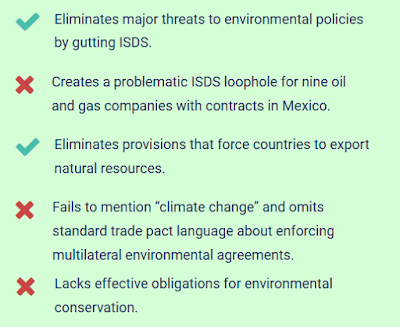 As you may have noticed, there’s nothing here about climate change.

A gift to Big Pharma, or a big wet kiss, depending on your degree of frustration. (More on the medicine clauses here.)

Another wet kiss. (More on the food safety clauses here.)

About consumer protection from imported goods — in other words, can you trust imported products to meet the same standards for safety as domestic ones — there’s very little good to report. The draft agreement:

The second item above is a plus, but it’s minor compared to the rest. (More on the consumer protection clauses here.)

And of course, this agreement has no meaningful sunset clause.

All in all this is a very bad deal, though slightly better than the truly horrible deal the previous agreement represented. Anyone who thought that for all his flaws, Trump would at least come through on trade … was mistaken.