This is Naked Capitalism fundraising week. 814 donors have already invested in our efforts to combat corruption and predatory conduct, particularly in the financial realm. Please join us and participate via our donation page, which shows how to give via check, credit card, debit card, or PayPal. Read about why we’re doing this fundraiser and what we’ve accomplished in the last year, and our current goal, thanking our guest bloggers. 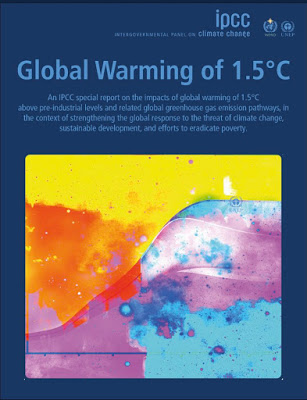 I’m just delving into the new IPCC special report on the effects of limiting, or not limiting, global warming of 1.5°C (full report here), and there are a number of bottom lines coming out of it, including this one, which we reported earlier: “IPCC Manipulating Climate Report Summary to Favor Wealthy Nations.”

The reference to manipulation refers to the executive summary part of the report (titled “Summary for Policymakers“), which national representatives are allowed to edit line by line. The rest of the report is written by climate scientists, but written by consensus, which causes it to “lean conservative” in its prognostication and prescriptions.

On that last point, Climate Central wrote in 2012:

Across two decades and thousands of pages of reports, the world’s most authoritative voice on climate science has consistently understated the rate and intensity of climate change and the danger those impacts represent, say a growing number of studies on the topic.

This conservative bias, say some scientists, could have significant political implications, as reports from the group – the U.N. Intergovernmental Panel on Climate Change – influence policy and planning decisions worldwide, from national governments down to local town councils. …

A comparison of past IPCC predictions against 22 years of weather data and the latest climate science find that the IPCC has consistently underplayed the intensity of global warming in each of its four major reports released since 1990.

The drastic decline of summer Arctic sea ice is one recent example: In the 2007 report [here], the IPCC concluded the Arctic would not lose its summer ice before 2070 at the earliest. But the ice pack has shrunk far faster than any scenario scientists felt policymakers should consider; now researchers say the region could see nearly ice-free summers within 20 years.

Sea ice predictions that are way off the mark are just the first of the prognostication failures the articl lists.

Yet taking all that into account, the bulk of which will strike most people as obvious, I still want to write several pieces about this publication, starting with this one. Greenpeace bottom-lines the report as follows:

• 2°C is much more dangerous than thought when the Paris deal was signed. We are closer to critical tipping points and other key risks than we thought. Four out of the five main Reasons for Concern have been revised to signal substantially higher risks with lower levels of warming for humans, species and economies.

• Limiting warming to 1.5°C instead of 2°C would make a huge difference for the life in oceans and land. It would protect hundreds of millions of people from frequent extreme heatwaves, halve the proportion of additional populations suffering water scarcity and help achieve sustainable development and poverty eradication goals.

• Limiting warming to 1.5°C or below is challenging but still achievable, if we are fast, bold and lucky, and accelerate action on all fronts now.

• The next few years are critical for the world to embark on a transformational path to reduce its carbon emissions and increase its forests to bring emissions to net zero by mid century the latest. With countries’ current climate targets for 2030, we would have no chance. So they must be improved.

• We need to think big, at all levels, with everyone on board. The challenge is unprecedented and it won’t be solved by technology or economics alone. We need better governance and deeper understanding of system transformations, agency and motivation for change. And we need to prepare for the impacts and losses that can no longer be avoided, meeting the needs of people at risk.

Greenpeace has other takeaways with more detail; the short info-sheet is worth reading in its entirety. Two that caught my eye are this one:

• With countries’ current climate targets we are heading for well above 3°C. …

• To get below 1.5°C global CO2 emissions would need to be halved by 2030 and reach net zero by mid-century at the latest, with substantial reductions in other gases.

Greenpeace is doing its best to be equally alarming and encouraging, as is, I suspect the IPCC (though we’ll find out more after reading the full report). Since no one really knows the future (an obvious statement that’s still only partly true), there may be a chance to avoid the worst of the climiate outcomes by stopping our emissions “now” — meaning ASAP, on an WWII-style emergency timeline.

The problem, of course, is that even though everyone, including the Fox News drones, believes the worst is on the way, no one among the masses believes a real solution is possible. Thus, nothing meaningful will be done, since no one thinks a meaningful think can be done. A circular checkmate, to mix metaphors.

More on the last point later, but I do want to show you a recent Saturday Night Live take on the IPCC report, which restates the above problem in a novel and comic way. This is from their “Weekend Update” segment. After talking about the Kanye West’s bizarre appearance in the Oval Office, the hosts pivot to the climate report (emphasis added):

Colin Jost: This [Kanye West’s pro-Trump pronouncement] was pretty crazy. But look, it’s not the end of the world, O.K., because this is the end of the world. That’s right. Scientists basically published an obituary for the earth this week and people were like, yeah, but like what does Taylor Swift think?

Michael Che: This story has been stressing me out all week. I just keep asking myself, why don’t I care about this? Don’t get me wrong: I 100-percent believe in climate change. Yet, I’m willing to do absolutely nothing about it.

I mean, we’re all going to lose the planet. We should be sad, right? This whole episode should be like a telethon or something, but it’s not. I think it’s because they keep telling us we’re going to lose everything and nobody cares about everything.

People only care about some things. Like, if Fox News reported that climate change is going to take away all the flags and Confederate statues? Oh, there’d be recycling bins outside of every Cracker Barrel and Dick’s Sporting Goods.

Nice double use of “cracker” and two good points. First, disaster freezes action (until it doesn’t). And second, most people don’t care about the planet or “humanity” in the abstract nearly as much as they care about their kin, their immediate friends, and their tribe. So what will make the TV-watching masses care enough to act?

I’ve often thought, for example, that something as non-lethal as the permanent inability to play college football anywhere on the East Coast from October 1 through November 30 — eight solid weeks — due to constant hurricanes and torrential rainstorms might do the trick.

After all, imagine: no home games for two entire months in much of the ACC or SEC, none in Florida, the Carolinas or Georgia, ever again. Would that get the Fox News and Fox Sports fanboys’ attention, enough for them to act? I think it might, and with a lot less loss of life than something much more drastic.