This is Naked Capitalism fundraising week. 1483 donors have already invested in our efforts to combat corruption and predatory conduct, particularly in the financial realm. Please join us and participate via our donation page, which shows how to give via check, credit card, debit card, or PayPal. Read about why we’re doing this fundraiser and what we’ve accomplished in the last year, and our current goal, more original reporting

Monday early afternoon, the US KBW Bank index, which tracks large US banks and serves as a benchmark for the banking sector, is down 2.5% at the moment. It has dropped 17% from its post-Financial Crisis high on January 29. If the index closes at this level, it would be the lowest close since September 18, 2017: 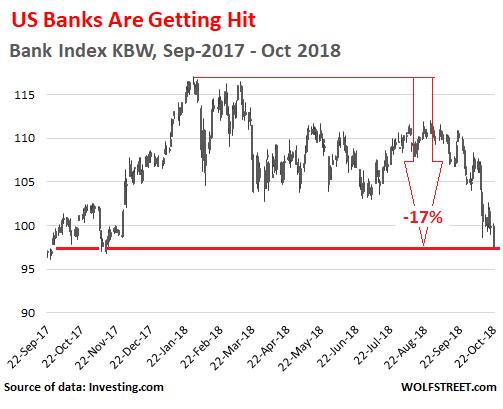 While that may be a nerve-wracking decline for those who have not experienced bank-stock declines, it comes after a huge surge that followed the collapse during the Financial Crisis: 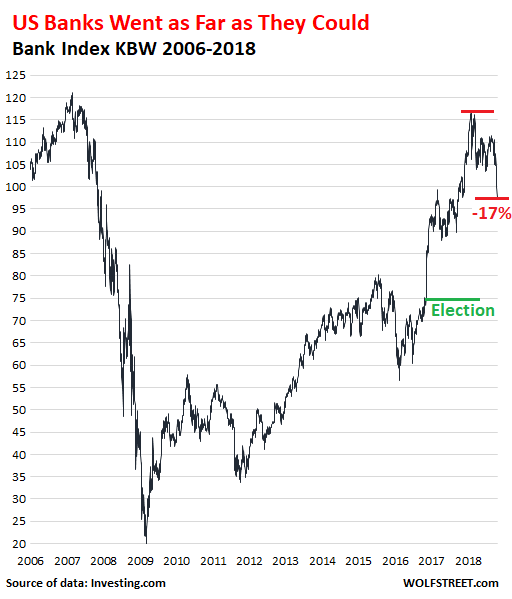 The second chart is on a different scale than the first chart above. So this year’s decline is small fry compared to the movements since 2006, including the dizzying plunge toward zero in early 2009, and the subsequent boom when it became clear that the Fed would pull out all stops to save the banks with all kinds of mechanisms, including ruthless financial repression – forcing interest rates to 0% – that it waged on depositors and savers for a decade. Profits derived from these mechanisms effectively recapitalized the banks.

The 55% jump in bank stocks after the 2016 election through the peak in January 2018 was a reaction to promises for banking deregulation and tax cuts from the new Trump administration along with signs of lots of goodwill toward Wall Street, as top positions in the new administration were quickly being filled with Wall Street insiders. However, the “Trump bump” for banks is now being gradually unwound.

But unlike their American brethren, the European banks have remained stuck in the miserable Financial Crisis mire – a financial crisis that in Europe was followed by the Euro Debt Crisis. The Stoxx 600 bank index, which covers major European banks, including our hero Deutsche Bank, has plunged 27% since February 29, 2018, and is down 23% from a year ago: 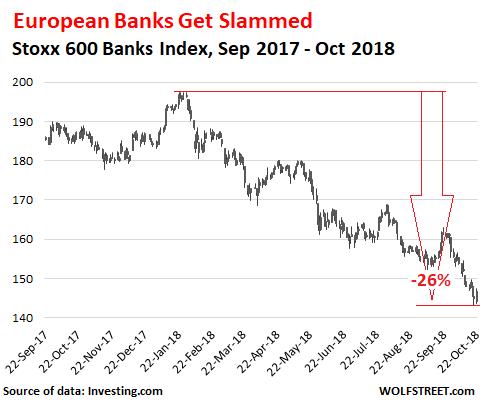 But note how minuscule this year’s 26% drop is in the overall collapse-scenario in the chart below going back to 2006: The Stoxx 600 Banks index never got anywhere near recovering after the Financial Crisis, as after each hopeful partial recovery, it kept falling off the wagon, and is once again falling off the wagon: 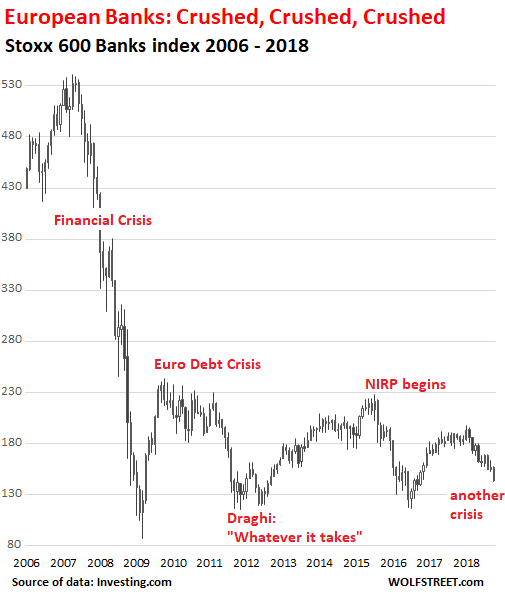 It’s not exactly a propitious sign that the banks in the US, after nearly recovering to their pre-Financial Crisis highs – “Close, but no cigar!” – are once again turning around and heading south as the Fed is “gradually” removing accommodation, which results in higher funding costs for banks and greater credit risks on outstanding loans.

And the European banks remain a mess and have an excellent chance of getting still get messier.

Why does this sell-off smell different? Read (or rather listen to)…  THE WOLF STREET REPORT