Looks like we might be stumbling again into one of those situations Yogi Berra described as deja vu all over again.

Tobias Adrian, Fabio Natalucci, and Thomas Piontek in the IMFBlog sounded the alarm on burgeoning risks in the $1.3 trillion leveraged loan market last week on the very same day that Senator Elizabeth Warren raised similar concerns when she grilled the Fed’s vice chairman for supervision, Randal Quarles, during hearings before the Senate Banking Committee.

This growing segment of the financial world involves loans, usually arranged by a syndicate of banks, to companies that are heavily indebted or have weak credit ratings. These loans are called “leveraged” because the ratio of the borrower’s debt to assets or earnings significantly exceeds industry norms.

Warren didn’t mince words when she questioned Quarles. According to CNBC:

“The Fed dropped the ball before the 2008 crisis by ignoring the risks in the subprime mortgage market,” Warren said. “What are you doing differently this time in coordination with other federal regulators so that you’re limiting the risk that leveraged loans cause serious harm to the financial system?”

Quarles’s response doesn’t make me sleep any more soundly at night. According to the WaPo:

Quarles said the volume of the loans isn’t as relevant as “the structures that these loans are being held in,” and the central bank is “looking very closely” at the matter. But he resisted Warren’s suggestion that the Fed should come down harder on those making the loans, as they did as recently as five years ago. “It’s not a rule,” he said. “To enforce guidance is inappropriate.” Instead, he said, the Fed is holding banks “to standards of safety and soundness.”[emphasis in original].

This strikes me as precisely the sort of obfuscatory gobbledegook that should make us sit up and realize, aha! There’s a real problem here.

The day before the hearing, Warren outlined her concerns more completely in a letter to Treasury Secretary Steven Mnuchin; Comptroller of the Currency Joseph Otting; Fed Chairman Jerome Powell, Securities and Exchange Commission Chairman Jay Clayton and FDIC Chair Jelena McWilliams. The letter is dense and thorough, and focuses on regulatory concerns, with specific questions to each addressee, and I encourage those interested to read that letter in full. But my concern in this post is not regulation per se, so I shall not discuss that letter further at this time.

The issues raised by the IMF and Warren last week Warren follow the issuance of the Bank of England’s Financial Policy Committee in October of what the BBC described as an “unusual warning”  about leveraged lending.  Later in the month, in an FT interview Janet Yellen also took up the theme:

“I am worried about the systemic risks associated with these loans,” said the former central banker [Yellen]. “There has been a huge deterioration in standards; covenants have been loosened in leveraged lending.”

These worries are not confined to regulators and politicians, either. Global fund managers have raised similar fears, most recently in a survey announced earlier this month by Bank of America Merril Lynch. That survey highlighted the explosion in corporate debt, and also the loosening of terms, particularly the “covenant-lite structures” mentioned by Yellen.)

In particular (from the FT Yellen interview):

There was a risk lessons from the crash were being forgotten, as banks embark on an aggressive lobbying push to water down reforms that were put in place at the start of the decade, Ms Yellen told the FT.

“There are a lot of weaknesses in the system, and instead of looking to remedy those weaknesses I feel things have turned in a very deregulatory direction.”

Ms Yellen said that while regulators were insisting banks hold appropriate capital against leveraged loans on their balance sheet, much of the debt ended up getting repackaged and sold on elsewhere.

“You are supposed to realise from the crisis, it is not just a question of what banks do that imperils themselves, it is what they do that can create risks to the entire financial system. That lesson to me seems to have been lost.”

She added: “If we have a downturn in the economy, there are a lot of firms that will go bankrupt, I think, because of this debt. It would probably worsen a downturn. [Jerri-Lynn here: my emphasis]

The content, tone, and intensity of these comments, from different but impeccable sources, should have grabbed your attention – although the concerns may seem a bit abstract.

The short IMFBlog piece, lays the problem out starkly and succinctly, and in the remainder of this post, I’ll focus on the five issues highlighted there.  It also included some excellent charts that present the information clearly for those who prefer to absorb information in that manner.

(Those concerned over some of the broader risks the world economy faces might wish to look at the Global Financial Stability Report October 2018: A Decade after the Global Financial Crisis: Are We Safer?, cited in the IMFBlog piece, which discusses whether “speculative excesses in some financial markets may be approaching a threatening level”. That larger report focuses on emerging markets, and not leveraged loans per se.)

So, without further ado, what are the specific concerns the IMF has identified with respect to leveraged loans?

First, Leveraged Lending  Has Grown Since the Financial Crisis

To begin at the beginning, in an era of easy credit, speculative-grade companies have not resisted ample opportunities to gorge themselves on cheap debt. The result: globally, in 2017 new leveraged loan issuance reached a record $788 billion, thus edging out the pre-crisis high of $762 billion in 2007. The US accounted for more than 70% of this market, with $564 billion of new loans. Figures for 2018 are not yet complete, but it looks like they won’t be far off the 2017 mark, having already reached a $745 billion annual rate.

Far from being directed into productive investment – the stated rationale for the past decade of low interest rates — the IMF instead notes that more than half the total of leveraged loans issued this year has been used to finance mergers & acquisitions activity, leveraged buyouts (LBOs), or share buybacks (aka financial legerdemain, or parasitic finance), and pay dividends. 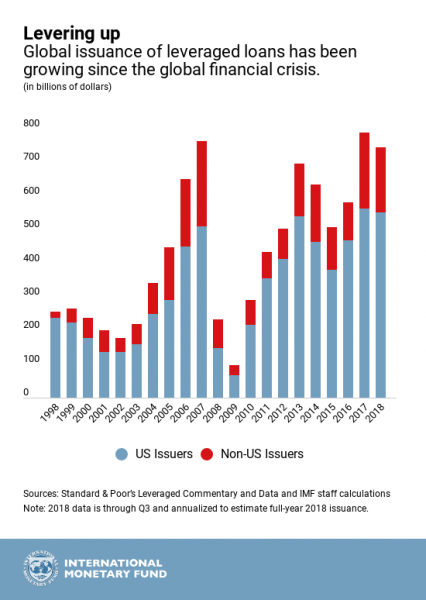 Second, a Growing Proportion of Leveraged Loans Have Been Issued By Highly Indebted Companies

At this late stage of the credit cycle, with signs reminiscent of past episodes of excess appearing, our minds – or certainly, the minds of investors, and regulators, should focus on  financial stability. In particular, the IMF notes:

How vulnerable is the leveraged-loan market to a sudden shift in investor risk appetite? If this market froze, what would be the economic impact? In a worst-cast scenario, could a breakdown threaten financial stability?

As I outlined above, some regulators — as well as investors – are acutely aware of  such concerns.

As figure 2 illustrates, in both the US and Europe, a growing share of leveraged loans have been issued by highly indebted companies. Echoing concerns expressed by Warren, Yellen, and the private sector, it’s not only the skyrocketing growth of leveraged lending in aggregate that is ringing warning bells. But who is doing the borrowing — especially their existing indebtedness — is itself its own problem. In both the US and Europe, the share of loans issued by highly indebted companies (as measured by the ratio or debt to earnings), has steadily increased. 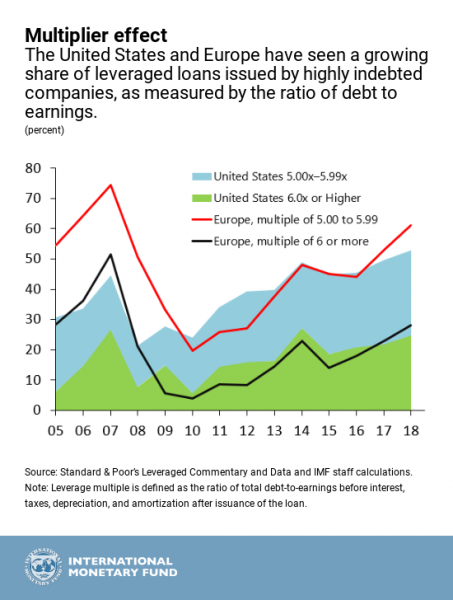 How is the possible?  Again, echoing the concerns expressed by some regulators and investors above, in order for this party to continue and indeed expand down the block, it has been necessary for underwriting standards and credit quality to deteriorate, as evidenced by the decrease in covenants to protect investors, and lower loss-absorption capacity.

I was amazed to see the degree to which this has occurred. I mean, I’ve been aware of this problem in general, but until I saw this IMFBlog piece, I hadn’t focused fully on the degree.

As the IMF notes:

This year, so-called covenant-lite loans account for up 80 percent of new loans arranged for nonbank lenders (so-called “institutional investors”), up from about 30 percent in 2007. Not only the number, but also the quality of covenants has deteriorated. 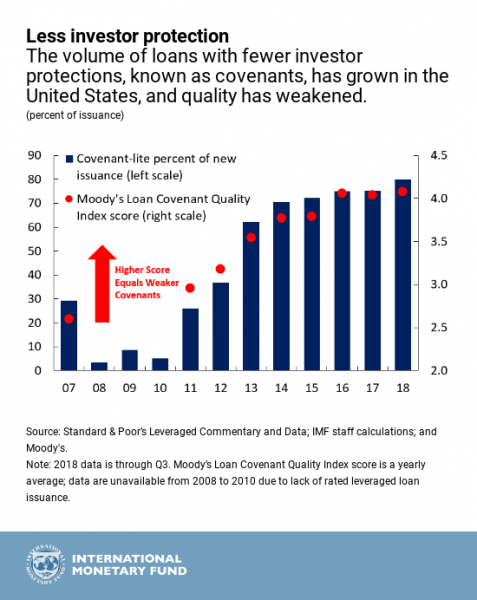 The -ahem- healthy appetite of investors for these leveraged loan deals has also led to a relaxation of non-price terms.  This is another consequence of the weakening of covenants – absent such standard investor protection terms, borrowers have greater latitude to manipulate their earnings projections – and investors have not reined them in. Why does that matter? Well, fiddling with earnings projections allows borrowers to take on more debt. And one other thing they’re allowed to do  is borrow after deals have closed – thus further increasing their indebtedness (and increasing the amount of leveraged loans outstanding, see my first point above).

Jerri-Lynn here: Does this seem sensible? Or does it more resemble a Wayne’s World approach to debt issuance. Party On!

Back to the more sober world of the IMF. As a result of the combination of rising leverage, weaker investor protections, and eroding debt cushions:

average recovery rates for defaulted loans have fallen to 69 percent from the pre-crisis average of 82 percent. A sharp rise in defaults could have a large negative impact on the real economy given the importance of leveraged loans as a source of corporate funding.

Those who are more graphically inclined might find Figure 4 helpful. 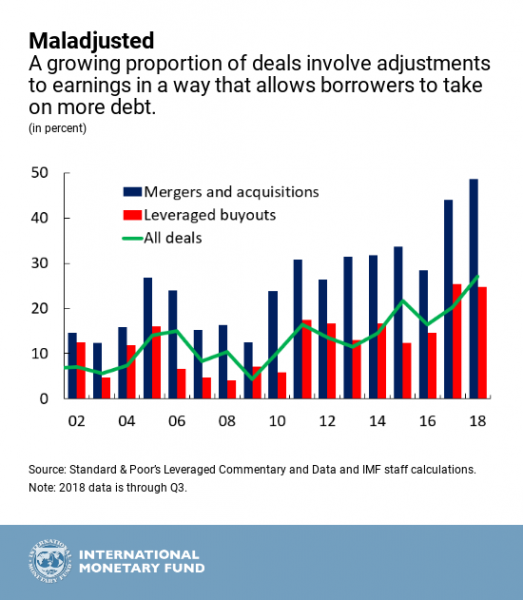 Fifth,  Who Holds These Loans?

Just in case the proceeding four concerns aren’t cause enough for worry, the fifth point the IMF makes may be the most serious: who holds these leveraged loans?

Answer: institutions now hold $1.1. trillion worth of these loans. That compares to the roughly $1.2 trillion in high yield debt aka junk bonds outstanding.

Mutual funds hold about $200 billion in leveraged loans – roughly 20% of what’s outstanding,  up from $20 billion in such holdings in 2006. Other institutions who hold such loans include insurers and pension funds.

But here’s where you should pay closest attention: at present, half of all leveraged loans issued in the United States are purchased by collateralized loan obligations (CLOs),  which bundle  them and then resell them to other investors.

Does any of this sound familiar?

Again, for those who prefer their data in graphic form, see figure 5. 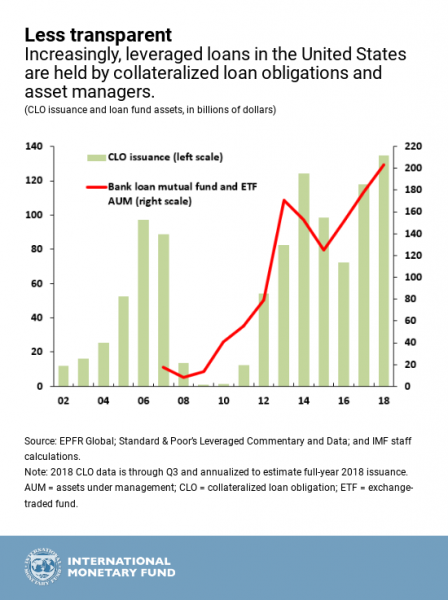 The IMF notes, “Institutional ownership makes it harder for banking regulators to address potential risk to the financial system if things go wrong.”

Hence the tone and content of remarks by the likes of Warren, Yellen, the Bank of England, and I’m sure many others, about the risks of the current state of play of leveraged lending.