The economic consensus is that groups behave in a more self-regarding way than individuals, which affects their members’ decision-making. This column describes new evidence from experiments in Slovakia and Uganda that supports an alternative hypothesis from social psychology that simply being a member of a group makes us more anti-social to outsiders. Within-group cohesion in organisations may also have a dark side, fostering hostility to outsiders.

Plato wrote about the limits of democracy, as did the founding fathers of the American constitution. More recently, social scientists have also worried about the dynamics of group decision-making, speculating that being part of a group may increase the motivation to harm outsiders and destroy social welfare. The causal effect of group membership on decision-making has been prominent on the research agenda in behavioural economics in the past 20 years, partly because so many political, military, and business decisions are made by groups rather than individuals.

Across many laboratory experiments, a pattern has emerged. Group decisions are less pro-social and cooperative than individual decisions. Groups are less willing to sacrifice their resources to increase social welfare, or to achieve a fair allocation. The consensus interpretation is that groups behave in a more self-regarding way. They are more likely to maximise a group payoff, and disregard the welfare of others (Charness and Sutter 2012, Kugler et al. 2012).

It is usually assumed that group members communicate among themselves, helping them to recognise a profit-maximising strategy. This interpretation suggests that group decisions can be modelled as more rational and less ‘behavioural’ than individual decisions, an important implication for economic theory.

Why Are Groups Less Cooperative Than Individuals?

Our recent paper (Bauer et al. 2018) uses an alternative explanation for the difference in cooperative behaviour of groups, compared to individuals. Social psychologists have a long-standing hypothesis that simply being a member of a group may inspire aggressively competitive anti-social behaviour (Durlauf 1999, Hewstone et al. 2002, Sambanis et al. 2012).

This hypothesis implies that groups do not cooperate less because they are self-regarding, but because they are more inclined to cause harm to outsiders – even at a cost to themselves. We define anti-social behaviour as non-strategic destructive behaviour that is costly for the decision maker, reduces welfare of others, and is not a response to inequality or a hostile behaviour of a counterpart. Experiments in previous research, including the Prisoners’ Dilemma game, Trust game, and Dictator game, were designed to measure the positive side of human social behaviour. They do not, however, distinguish whether a lack of willingness to cooperate or share has been caused by greater selfishness, or by this anti-social behaviour.

These distinctions matter if one wants to predict willingness to engage in self-destructive conflict:

Our experiments were conducted among large and diverse samples of adolescents in two very different settings – Uganda (N=1,679) and Slovakia (N=630) – using a comparable design. We compare the (anti-)social behaviour of individuals, and the team decision of groups made up of three randomly selected individuals.

The experiment is designed to distinguish self-regarding from anti-social motivations, and also to decompose the overall group effect into the effect of group decision-making, and the effect of the group context on individual behaviour.

To do so, we complement the prisoners’ dilemma game, a standard experiment to measure willingness to cooperate, with the joy of destruction game, an experiment that uncovers anti-social behaviour.

Groups are less likely than individuals to cooperate in the  prisoners’ dilemma game, in line with findings in previous experiments. Importantly, however, they are also more likely to harm opponents in the joy of destruction game, in which the dominant strategy for self-regarding agents is not to engage in destructive behaviour. This is primarily due to a greater prevalence of anti-social behaviour among groups.

The stronger anti-social behaviour of groups as compared to individuals cannot be explained by differences in beliefs, reciprocal motives, inequality aversion or diffusion of individual responsibility. Groups are more willing than individuals to pay to cause harm even when they respond to a kind act from an experimental counterpart, and when destroying resources increases inequality.

Furthermore, anti-social behaviour in a group setting is elevated simultaneously with willingness to enter competition with outsiders, as measured in the competitiveness game in Uganda (Niederle and Vesterlund 2007). Together, these findings indicate that individuals in groups are more aggressively competitive.

Decomposing the overall group effects shows that both the group context as well as deliberation among group members matter. Group context makes individuals more willing to engage in anti-social behaviour and to compete, whereas the group decision-making slightly increases the prevalence of self-regarding choices.

All these effects are strikingly similar across the Slovak (Figure 1) and Ugandan (Figure 2) samples, suggesting that the preference for competing aggressively when deciding in a group is a deeply rooted response.

Figure 1 Slovakia: The effect of group decision-making on choices in the joy of destruction game and the prisoners’ dilemma game 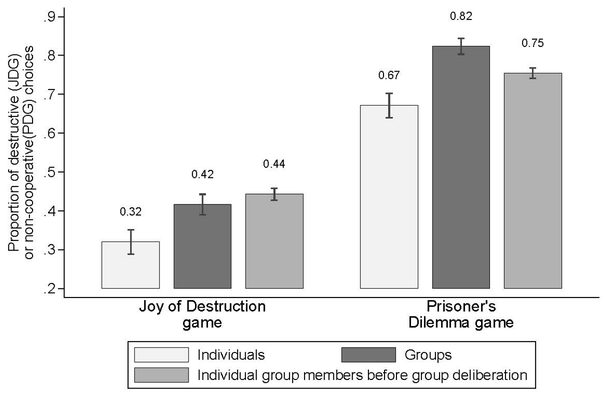 Figure 2 Uganda: The effect of group decision-making on choices in the joy of destruction game and the prisoners’ dilemma game 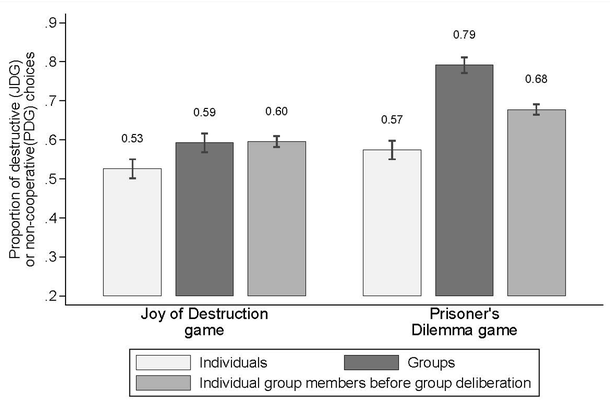 Earlier research on identity has shown that creating coherent teams fosters efficiency in military and business-oriented organisations (Akerlof and Kranton 2005, Goette et al. 2006, Costa and Kahn 2001), by making in-group cooperation easier. Our results suggest that this may come at the expense of aggressive competitiveness against members of other groups.

This may help to explain the ubiquity of inter-group violence (Blattman and Miguel 2014) or mutually destructive competition within and across firms. It also strengthens the case for policies to counteract narrow group identities.

Competitiveness also has an import role when determining individual career choices. Economists are attempting to identify factors which may foster competitiveness in individuals (Gneezy et al. 2009, Andersen et al. 2013, Almås et al. 2015) and design institutions that help to close gender gaps in willingness to compete (Sutter et al. 2016, Niederle et al. 2013, Balafoutas and Sutter 2012). Our findings show that the factor that increases willingness to enter competitive environment also raises anti-social behaviour, and thus suggests there is a potential trade-off. Competitive environments may lead to efficiency gains in some settings, but also to more socially harmful behaviour.