Markets are in a tizzy. They’re finally reacting to the Fed’s rate-hike cycle, the slowest rate-hike cycle in history. It took three years to nudge up the effective federal funds rate from near zero to 2.40% now. Throughout, the Fed has communicated its goals of “removing accommodation” from the “financial conditions” in the markets — thus tightening “financial conditions” that had become loosey-goosey during years of zero-interest-rate policy and QE.

And suddenly, financial conditions in the markets started tightening in October. So let’s see where we are — and how this might impact the Fed’s decisions.

“Financial conditions” is a key term in the Fed’s official communications. For example, in the minutes from the November FOMC meeting, the most recent available, the term was used five times:

These “financial conditions” indicate how easy and cheap, or how hard and expensive it is for borrowers to borrow. Tightening financial conditions mean that investors are reluctant to fund high-risk companies. This shows up, for example, as the difference (the “spread” or risk premium) between the yields of risky corporate bonds and “risk-free” Treasury securities.

In the riskiest category of corporate bonds, CCC-and-below-rated bonds, just above D for default, yields started surging in October 2018, after being somnolent through the entire rate hike cycle.

The average yield surged in three months from 9.6% at the beginning of October to 13.58% yesterday at the close. In other words, for these companies, the cost of borrowing over those three months has surged by 41%. 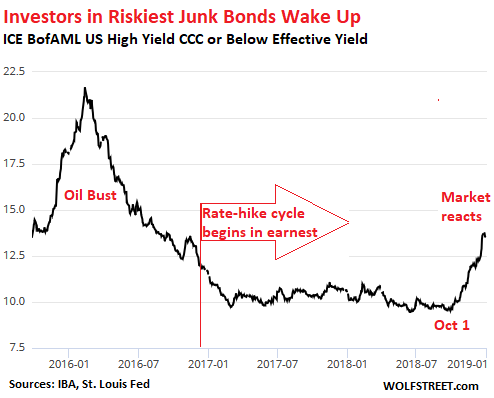 Even more telling is the “spread” between the average CCC-and-below yield and the equivalent Treasury yield. It shows how much more investors demand to be paid to take on the extra risks of these junk bonds, compared to Treasury securities.

The fact that the spread (risk premium) has widened faster than the CCC-yield has risen over this period is impacted by two factors:

In other words, investors are clamoring for low-risk assets. And they need to be induced with richer yields to invest in high-risk assets. This is a sign that “financial conditions” are finally tightening.

So the current spread of 11.1 percentage points is nothing to get frazzled about. But it means that for these CCC-rated companies, the long-prevailing ultra-loose financial conditions have tightened significantly.

The same principle is at work in the category of BBB-rated bonds — the lowest investment-grade category (here’s my color-coded cheat sheet for the corporate bond rating scales). The average yield has surged from about 4.1% at the beginning of October to 6.17% yesterday at the close. And the spread to Treasuries has widened from 2.1 percentage points to 3.61 percentage points.

So, yields on riskier credits are rising, and spreads to Treasury yields are widening at a good clip. This is exactly what the Fed has set out to accomplish three years ago.

But the well-known lag between changes in monetary policy and its transmission to the markets — typically between 12-18 months – was nearly three years this time around, in part due to the very “gradual” pace of the rate hikes that markets brushed off for the longest time. But no more. 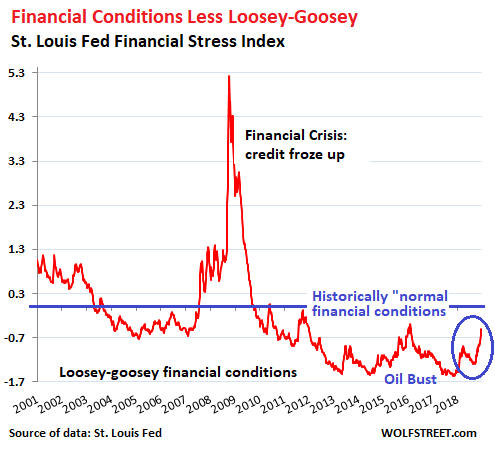 Note the enormous spike during the Financial Crisis, when financial conditions tightened so much that credit was beginning to freeze up.

In November 2017, nearly two years after the Fed had started its rate-hike cycle, the index dipped to record lows, a sign of the lag between changes in monetary policies and transmission to the markets.

By “normalizing” its monetary policy, the Fed attempts to “normalize” financial conditions in the markets to bring them back to historical norms. This means making credit more expensive and harder to come by for riskier enterprises. It means risk is getting “repriced.” It means that the Financial Stress Index ticks up to about the blue zero-line in the chart above.

So now the question is this: When will the Fed consider financial conditions to have tightened sufficiently to where it can keep its monetary policy unchanged? This point is clearly approaching.

The Fed does not want to trigger another financial crisis where credit freezes up and mayhem breaks out. It just wants to “normalize” financial conditions.

Markets can react wildly, overshooting in both directions. And as we have seen, there is this lag between monetary policy and market reaction to those policies. No one knows yet how much further financial conditions will tighten on their own, even if the Fed just hangs tight.

The Fed’s “gradual” approach has been designed to avoid a sudden market reaction, such as a convulsion into another financial crisis, with all kinds of things collapsing left and right, which would then induce the Fed to once again go haywire with experimental monetary policies that no one can figure out how to undo afterwards without blowing down the entire house of cards again.

[Perhaps the latter part of that phrase is the perplexed state we’re in now.]

From the Fed’s point of view, it would be far better if financial conditions tighten in small increments until they’re “normalized” — at which point the Fed could wait until the dust settles and until there’s better visibility. We’re not far from this point, after the recent market gyrations.

The problem that the markets have – and why they’re in such a tizzy – is that investors have been pampered and coddled for so long by central-bank policies that “normal” financial conditions now seem like cruel and unbearable torture. But they’ll get used to it if there is enough time.