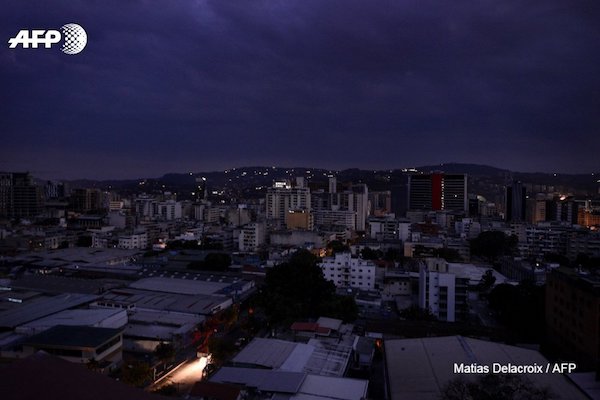 And here is an animated image of what’s happening to the Internet in Venezuela as the power failure waxes and wanes:

Venezuela shut schools and suspended working hours on Friday after the capital Caracas and other major cities awoke without electricity for a second day due to a problem that struck the South American country’s main hydroelectric plant [, the Guri Dam]… “This is a severe problem. It is not just any blackout,” said Luis Martinez, a 53-year-old walking to work in eastern Caracas.

“A problem that struck.” Note lack of agency. And so the agent would be…

On Thursday, the Minister of Electric Energy Luis Motta Domínguez attributed the difficulties at the hydroelectric plant to “sabotage”, without providing further details.

Thinking back to, say, the way we sabotaged Iranian nuclear centrifuges with the Stuxnet worm, it’s not prima facie demented to claim sabotage on a similar project; further, sabotage of the Venezuelan grid, at the substation and transformer levels, is not unknown. That said, I can’t find any claims being made for the type of sabotage — software for the power generating facility? Physical sabotage of the dam, as with high explosives or even an air strike? — or any reports from the ground. Bloomberg:

The sabotage allegations simply aren’t credible, according to [Miguel Lara, a former director of Venezuela’s power grid]. Guri, he said, is heavily guarded and a virtual attack could have been repaired by isolating faulty equipment.

Isolating faulty equipment did not work in the case of Stuxnet, and might not work given insiders who could provide schematics to the software engineers designing malware.

But all this is pure speculation! Fun, but we’ll have to wait for the real story (if indeed we ever know it). In this post, I won’t present a general theory of whatever it is the administration is trying to to accomplish in Venezuela (besides irredentist Latin votes in Florida), or their methods (probably unsound. For an overview, see NC here). Instead, I’ll look at a splendid prank that may reveal at least what is in National Security Advisor John Bolton’s mind, how we managed not to actually invade Venezuela, revealing anecdotes about life under the tyrannous Maduro, and conclude by urging that Maduro may be stronger than is being reported.

Reagan-era thug Eliott Abrams, fresh from his beat-down by Ilhan Omar, was totally p0wned by Russian pranksters pretending to be the Swiss President:

The U.S. envoy for Venezuela dismissed the possibility of American military action in the South American country in a recording made by two Russian pranksters and released Wednesday.

Special Representative Elliott Abrams said in the recording that the U.S. wouldn’t use force in Venezuela unless the government did something “completely crazy” like attack the American Embassy.

But Abrams, who apparently believed he was speaking with a Swiss official, said the U.S. seeks to “make the Venezuelan military nervous” by not publicly ruling out military action to oust President Nicolas Maduro.

“We think it is a mistake tactically to give them endless reassurances that there will never be American military action,” he said. “But I can tell you this is not what we are doing. What we are doing is exactly what you see, financial pressure, economic pressure, diplomatic pressure.”

The recording was made by two Russian comedians, Vladimir Kuznetsov and Alexei Stoyarov, as one of the men posed as a Swiss official speaking with Abrams about efforts to seize Venezuelan bank accounts as part of an effort to compel Maduro to cede power to opposition leader Juan Guaido.

“Economic pressure”… like sabotaging the Venezuelan power grid? Anyhow, while it’s good to know that Bolton, at least says he’s not contemplating an invasion, it’s not clear whether that’s the result of a sudden outbreak of sanity, or because we don’t have the ability to do any such thing. Because–

From the following Bloomberg story, “Heavily Armed Soldiers Aborted a Plan to Enter Venezuela by Force“:

Late last month, as U.S. officials joined Venezuelan opposition leader Juan Guaido near a bridge in Colombia to send desperately needed aid to the masses and challenge the rule of Nicolas Maduro, some 200 exiled soldiers were checking their weapons and planning to clear the way for the convoy.

Led by retired General Cliver Alcala, who has been living in Colombia, they were going to drive back the Venezuelan national guardsmen blocking the aid on the other side. The plan was stopped by the Colombian government, which learned of it late and feared violent clashes at a highly public event it promised would be peaceful.

Almost no provisions got in that day and hopes that military commanders would abandon Maduro have so far been dashed. Even though Guaido is back in Caracas, recognized by 50 nations as the legitimate leader of Venezuela, the impromptu taking up of arms shows that the push to remove Maduro — hailed by the U.S. as inevitable — is growing increasingly chaotic and risky.

“Highly public event.” So Branson’s stupid concert was good for something? Anyhow, if we can’t get 200 guys across a border… Doesn’t anybody here know how to play this game?

The Yoke Of Tyranny

This is pretty simple:

So Guaido is swanning about Caracus, hugging his wife and trying to overthrow the government, and The Tyrant Maduros hasn’t had him whacked? GTFO. And then, there don’t seem to be any food shortages in the luxury malls of Caracas:

What could they possibly want a coup for? A nicer mall? Flirting with disaster — for what? https://t.co/1AhD19tsga

I mean, given that Venezuela exists under the sway of a brutal tyrant determined to impose a kulak-like fate on Venezuela’s Beautiful People, why do luxury malls even exist? Instead of being charred ruins. Again, GTFO.

From Venezuelanalysis, “Interview with Union Leader Stalin Pérez Borges: It Will Be Very Difficult to Defeat Us“:

The anti-imperialist sentiment of our people is historic and runs very deep. It will be difficult to defeat us. It will be very difficult to convince a majority of the workers and poor people to accept the raising of the US flag, as Guaidó and the political leaders of the right that accompany him have done in their public demonstrations. Since the oil strike of 1936, which almost became a national strike against the British and Yankees, and the military dictatorship, a very deep anti-imperialist sentiment has grown, which was rebuilt or revived for more than fifteen years with the message of Chávez. A rebellious sentiment appeared here that hasn’t stopped since February 27 and 28, 1989. This has found expression in the decisive, fearless struggle of April 13, 2002 [when an attempted military coup against Chávez was defeated], and in the response to the bosses’ strike and oil sabotage [in December 2002-January 2003]; in all the resistance we have done, not letting the right wing oust Maduro by force.

This guy isn’t a union leader like in, say, the AFL-CIO national office. You may or may not agree with his viewpoint, but Borges is quite critical of the Maduro government, and share a lot of history. One curious fact that stands out in the blackout reporting: There were no reports that I can find of looting; tthat’s such an obvious narrative that it would have instantly propagated via stll-charged cellphones and Twitter that I can’t help but think that Venezuelan society is on a more solid footing than presented in the press and by our political class.

And for contrast, let’s look to the IMF: “IMF Comments on ‘Complex’ Venezuela Situation“:

The International Monetary Fund on Thursday called Venezuela one of the most “complex situations” it had ever seen.

IMF Managing Director Christine Lagarde told The Economist Radio, a podcast, that the fund would help “as soon as we are asked by the legitimate authorities of that country.”

“We will open our wallet, we will put our brain to it, and we will make sure our heart is in the right place to help the poorest and most exposed people,” she added, calling the task it faced in Venezuela “monumental.”

“help the poorest and most exposed people.” ‘Tis a consummation devoutly to be wished. More:

Rice said Thursday that the IMF had yet to determine whom to recognize as the leader of Venezuela — President Nicolas Maduro or opposition leader Juan Guaido, the self-declared interim president.

Note that the Rice says they’re waiting for a request by “legitimate authorities,” but they don’t know who those authorities are. (Also, although there only 50 countries have recognized Guaido (if recognized is the word I want), although there are 189 IMF members, who may have views of their own about who the legitmate authorities in Venezuela are. All this seems to be taking rather a long time. Iraq, Afghanistan, Libya, Syria: Alll debacles. Now Venezuela? Seems like there’s more than one power failure going on….

Here’s some useful reporting from the ground in Venezuela — notably lacking in the mainstream press! — from Max Blumenthal, interviewed by the redoubtable R.J. Eskow: