Normally, when banks look into merging, the impetus is either opportunism, whether well informed or not, or desperation. The only thing that differentiates the possible combination of Deutsche Bank, long the sickest man of Europe, and not all that healthy Commerzbank is that the desperation isn’t driven by the usual urgency, that a bank is about to keel over, unless, as some wags speculate, Deutsche’s first quarter numbers are coming in so bad that the bank needs to have some of credible plan to Do Something before it announces the results. One commentor at the Financial Times reported that “DBK was and is having trouble with wholesale funding spreads widening very strongly.” That suggests that the German giant, after so many years of limping along, may be too close to a tipping point for the officialdom to sit pat.

For Deutsche Bank, the urgency to address the situation is exacerbated by high funding costs and the risk of a credit rating cut. Chairman Paul Achleitner is said to see an expansion of Deutsche Bank’s retail deposit base — which Commerzbank would bring — as one way to lower funding costs. 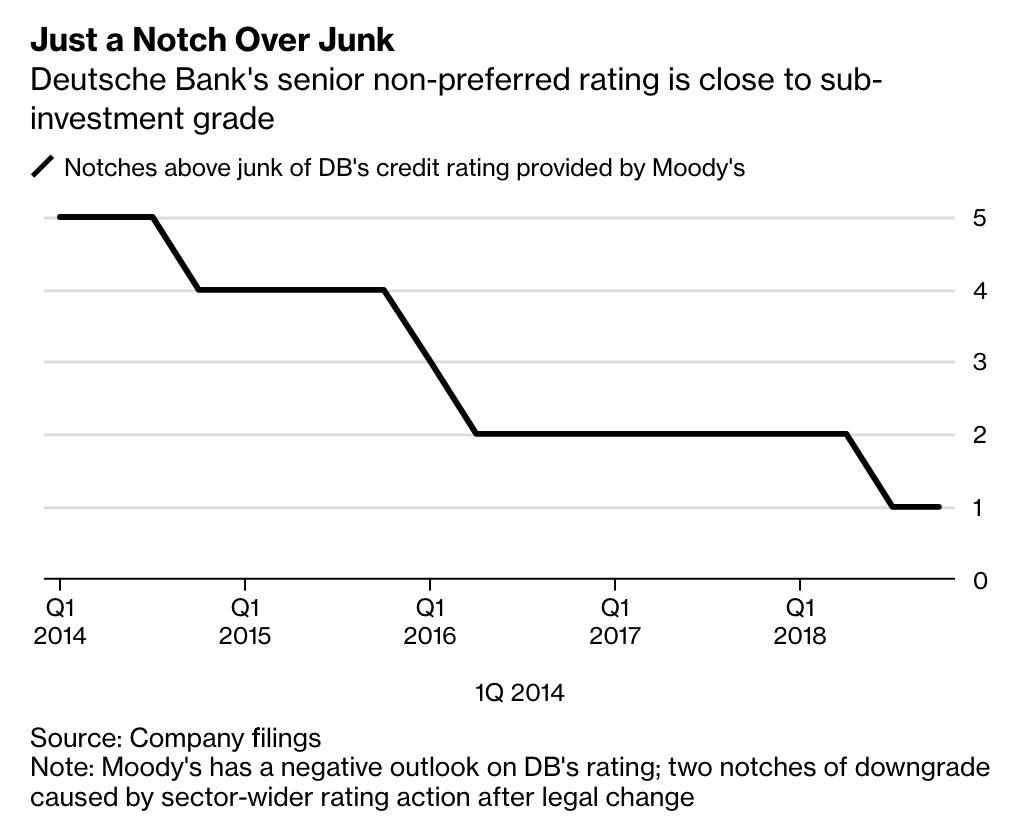 Germany is a particularly difficult banking market. Readers may recall how Michael Hudson, in his classic article From Marx to Goldman Sachs, pointed out how it had been inconceivable to Marx that finance-oriented capitalists would win out because their way of operating was harmful to manufacturing. Germany embraced an industry-oriented approach to capitalism, while Britain sought to be the world’s banker. Hudson argues that an unfortunate and not widely recognized outcome of Germany’s defeat in World War I was it helped advance finance-oriented capitalism into a dominant position.

While I can’t prove it (and I hope those who know the German banking market better will pipe up), some of the difficulties Deutsche and Commerzbank are suffering appears to be the results of Germany being ambivalent about bank profits, as in on some level (and perhaps explicitly in some circles) seeing them as a drag on commerce if they rise above a very modest level. The reason I suspect this is that when I worked with the Japanese, who are also strongly mercantilist, manufacturing-oriented, banking profits were seen as a bad thing. Japanese banks had fabulously low returns on assets by global standards and were extremely lean. Sumitomo Bank, which was a bad boy by seeking to be Japan’s most profitable bank, was pretty close to Citibank in total assets, had half as many foreign branches and about 2/3 as many domestic branches. In the mid-1980s, Citi had over 100,000 employees. Sumitomo Bank had 16,000 and was planning to reduce the number to 14,500.

Germany’s Landesbanken have government backing and their Sparkasse purportedly are not profit oriented. The fact that most advanced economies feel the need to at least one bank as a serious international player is undermined by the big banks having even more difficult-than-in-other-countries competition for retail deposits.

But Germany feels it can’t not have a national champion. From Bloomberg:

By bowing to officials’ desire to forge a durable German lender with global reach out of two troubled firms, Deutsche Bank’s leaders are hardly putting their woes behind them: massive job cuts, political turbulence, a weakening European economy, U.S. probes into its dealings with Donald Trump and a herculean integration – not to mention skeptical clients and investors — lie ahead if they reach a deal.

That does not excuse Deutsche Bank having long been spectacularly mismanaged. It’s been operating under what amounts to regulatory forbearance since the crisis, with capital levels way way below any other big international bank. But Deutsche is the classic “too big to fail” bank. Whether it is too big to bail is debatable, but the EU’s new Banking Recovery and Resolution Directive, which banking experts almost to a person declared to be a horrorshow, was supposed to end bailouts and force bail ins….refusing to recognize that that’s a prescription for bank runs. And even though Deutsche is very much the German government’s problem, as readers no doubt have figured out, German politicians hate fiscal spending and stealth monetization of spending. So until there is a crisis to force their hands, they are allergic to providing official support to Deutsche.

No one is trying to put lipstick on this pig. It’s remarkable to see how little support there is for the prosed merger. I’ve never seen comments in major media outlets, particularly citing the opinions of insiders. From the Financial Times:

The long-mooted idea of merging the two has been met with stiff opposition from the bank’s influential unions, and scepticism by five of Deutsche Bank’s top six shareholders, who fret that it may derail the lender’s internal restructuring.

Among the few clear supporters of a deal are Paul Achleitner, Deutsche Bank chairman, Martin Zielke, Commerzbank chief executive and private equity fund Cerberus, one of the biggest shareholders in both lenders.

Deutsche Bank management had previously been resistant to a merger, but lacklustre performance, combined with the prospect of lower-for-longer interest rates and pressure from the German government to address the lenders’ bloated costs and measly returns, triggered a rethink.

Of course, the reason for having to resort to Commerzbank is no major international bank would be saddled with a garbage barge like Deutsche. It’s not just that it’s hard to see why any bank that wasn’t subject to German political pressures would even consider this idea; their regulators would nix it directly or kill the deal by imposing insurmountable conditions.

The nominal excuse for the deal is unpersuasive. The claim is that cost-cutting efforts at both banks have not gone deep enough, and the only way to cut further is to merge. I am admittedly generalizing from the US, but we have had far more bank consolidation than anywhere in the world. Bigger banks are not more efficient. Even if there are theoretical economies of scale in funding and in certain lines of business, they are often not realized. On top of that, there are diseconomies of scope.

For instance, it’s clear that one of the hoped-for sources of cost savings is branch consolidation. But the US experience is that this is often a fail. Even when branches seem to overlap, customers don’t like it when their favorite branch disappears. More customers than the banks expect leave.

The employees’ union expects that up to 30,000 jobs would be axed if the merger went through. A common pattern with US bank deals is that the combined makes cuts that the separate banks could have made but didn’t. One wonders here if a reason for the transaction is to bulldoze labor organizations.

The two banks expect to lose customers…..and this comment suggests they are mainly looking at business customers. Again from the Financial Times:

They estimated that while annual costs would fall by €2.3bn, a deal would trigger revenue losses of around €1.5bn because of clients moving business to rivals to maintain diverse banking relationships.

A worsening of the Deutsche Bank train wreck is guarantted. Clive gave a warning when the merger idea hotted up at the end of January:

The big banks have totally lost control of their IT estates. They have no consolidated idea what their installed assets are and what they do. I was on a conference call yesterday which managed to finally conclude — after 9 months and I am not kidding — definitively that an application was really still needed (it had been targeted for possible decommissioning).

We bought a US bank’s UK book for a specific retail product two years ago. With a lot of luck we’ll be able to do a very soft launch post migration onto our hosting (and there was the distinct advantage that we shared the same hosting platform and suppliers) in another six months. Full migration might, just might, be completed in another 18 months. The budget for the migration programme is £1.9bn. For one bloody product book. Bog standard vanilla consumer lending product lines. And we had to take an axe to a lot of the US bank product offers.

DB and CB would burn through their entire shareholders’ equity before they even got half way through.

Even yours truly, who is hardly plugged into IT circles, has been hearing horror stories for at least 15 years. Richard Smith flagged this 2018 article, Inside Deutsche Bank’s “dysfunctional” IT division. From the top of the piece:

So, COO Kim Hammonds is leaving Deutsche Bank. Less than a month after describing Deutsche as, “vastly complex,” the, “most dysfunctional place she’s ever worked,” and in the middle of a, “difficult transformation,” Hammonds has left, “by mutual agreement with the supervisory board.” She was, “a breath of fresh air,” according to the chairman. In some ways, however, Hammonds does not seem to have been fresh enough.

Lots of ugly detail for those of you who like that sort of thing.

And it’s not as if Commerzbank is much better. Richard also cited this Handlesblatt story, Buchungspanne verärgert Commerzbank-Kunden, which he summarized as “A recent outbreak of TSB-like core banking cockupry (direct debits and standing orders failing).”

But as he concluded, “There’s no set of systems so bad that you can’t make them worse by doing a merger, so bring it on, say I.”

If nothing else, this merger will be a full employment act of German bank consultants who can take the pain of working on such a mess. But even from this remove, it’s obvious that the effort to prop up zombie-in-the-making Deutsche is running out of tricks. This will end badly. The only question is how quickly that becomes undeniable.