A cigarette, martini, a staircase and Bette Davis — the 2020 election in a nutshell

That makes handicapping this field pretty easy, at least so far. Note that it’s very early days still, so this is a way-too-early set of predictions.

Characterizing the Pool of Voters

Before we begin, however, the pool of voters must also be grouped, since they have a role in the coming drama. The three main groups of voters are:

There’s a certain overlap between groups one and three, but group three rules out all who might vote for any non-Trump candidate. That is, group three isn’t all Trump supporters, just his most rabid ones. There could be plenty of Trump voters in the first two groups. 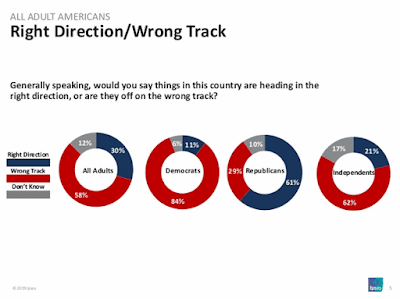 So let’s take a guess at the percentage of “Trump and Trump only” voters in the electorate. The latest Gallup poll divides the electorate this way: 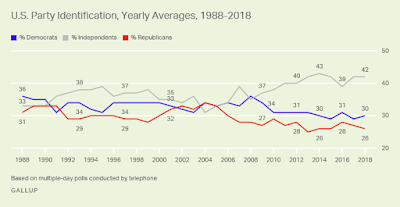 Whom Will the Democratic Nominate in the General Election?

Let’s go back to our grouping of Democratic candidates. A recent Morning Consult poll lists the leaders this way:

I would put Bernie Sanders and Elizabeth Warren (unless she spins herself out of this group by a terrible misstep) in the “like-Sanders” group — real threats to the status quo, at least on economic policy. Let’s call these “actual change candidates,” people who don’t just preach change, but whom voters can count on to deliver it.

I would put each of the others:

in the second category. Let’s call them “status quo ante” or “next Obama” candidates — people who want to return to the pre-Trump years when they thought everything was just fine — or at least fine enough — in America. This group may preach “change,” but it will clearly be change at the margins of a reasonably OK system. And they will signal that either advertently or inadvertently.

To take the case of Amy Klobuchar, for example, she signaled that inadvertently just recently with her student loan proposals.

For the following, let’s assume that (a) Trump is the Republican nominee and (b) all Democratic candidates get all Democratic voters (according to the Gallup division) to vote for them.

Case 1: If one of the Democratic “actual change” candidates — someone who espouses broad Sanders-like Democratic Socialist policies and is believed to be credible by the majority of Sanders most eager supporters — is nominated by the Democrats, that person could easily capture not just all of the Democratic voter pool, but a very large percentage of the independent voter pool and a good chunk of those 29% of Republicans who think the country is on the wrong path.

If that person got the 30% who identify as Democratic, most of the “wrong track” independents, and just some of the 29% of dissatisfied Republicans (remember that much of Trump support came from change voters in a change year), that person could command perhaps 56% of the electorate, if not more:

That puts a Democratic Socialist in the White House. Remember, the total percentage of “wrong track” independents is 62%, or a full 26% of the electorate — assuming they all vote.

Case 2: If one of the “status quo” candidates is nominated, however, things look different. A true status quo candidate will have to sell him- or herself to independent voters using a small set of appeals. These are:

1. “The Obama status quo is plenty good enough. Don’t be scared by all this change-making.”

2. “I’m really a change candidate, though my past belies that. I’m just not as change-y as those I like to call ‘ radicals’.”

About the latter appeal, Joe Biden himself espoused something like that in the 1970s (quoted here): “I don’t think the issues mean a great deal in terms of whether you win or lose,” Biden told Washingtonian back in 1974. “I think the issues are merely a vehicle to portray your intellectual capacity to the voters . . . a vehicle by which the voters will determine your honesty and candor.”

By “honesty and candor” he meant “charm and charisma,” since honesty he had none of, even back then.

If he runs, Joe Biden will sell himself as keeper of the Obama status quo, plus folksy charm. Harris, Booker and Klobuchar (before she drops out) will each use the second appeal: “Despite my past, I’m change-y enough.” O’Rourke’s primary sell is eager charisma; none of his past looks remotely like change, despite the inexplicable addition to his campaign organization of some of the 2016 Sanders alums.

Where Does That Put Them in the General Election?

Again, each will get the 30% of the electorate that identifies as Democratic. Very few staunch Party supporters will withhold their votes from any Democratic nominee in 2020.

Because none of them is a credible change candidate in Republican eyes, very few Republican voters will switch sides if any of these candidates is the Democratic nominee. That puts 26% of the voters against them.

How will independent voters split? According to Reuters/Ipsos, 21% of independents think the country is on the right track, with another 17% unsure. If Trump picks up all of the “right track” independents and a little more than half of the not-sures, his vote totals so far look like this:

Again, 62% of the independent voters in America think the country is on the wrong track. Will they vote for Trump, a status quo Democrat, or stay home? They didn’t vote for Clinton in enough numbers to guarantee her a sure win. Will they stay home in sufficient numbers twice?

It comes down to this. If the Democrats nominate a genuine change candidate, she or he will likely win comfortably. I could easily see a 55-45% popular vote split, with an even greater margin in the Electoral College.

If the Democrats nominate a “status quo” or “change-y enough” candidate, on the other hand, the race could be tight, as it was in 2016.

To show you what I mean, if all independents stayed home, the split between Democratic and Republican voters is just 4%. But 9-14% of independents are likely Trump voters. If only they vote, Trump has a 10% cushion among independents that the Democrats must make up. Can a status quo, change-y enough, or charisma-only candidate do inspire them to  vote?

45% of all U.S. voters stayed home in 2016, a 20-year low. While all of them weren’t independents, that’s ironically the percentage of independent voters in 2018.

What Will Democrats Do?

What follows is even more speculative than the rest of this piece, but there’s some history to back it up.

1. Unless Sanders or a Sanders-like candidate has such a large lead that the race can’t be stolen, the “status quo” (pro-corporate) leaders of the Democratic Party, with media help, will try to steal it.

2. If the theft is so obvious that even NPR news watchers notice, it will drive down Democratic support among independents, who are largely a pro-change group if they see someone they like, and non-voters if they don’t.

3. That won’t matter to Party leaders. Assuming there hasn’t been a palace coup that replaces them, they will run an even more strident version of the 2016 campaign: “Trump?! You want to leave Trump in office?!”

(This is where “Someone Else” comes in, by the way. If each of the other not-Sanders candidates stumbles, Someone Else will be put forward. There are some interesting names in this list.)

4. If a non-Sanders-like candidate is nominated, the 2020 election will be a squeaker, as was 2016, with the incumbent (because this time there is one) likely winning.

5. If the incumbent is Pence, the same applies.

Of the standard-issue Democrats, the most likely nominees at this point, and also the most vulnerable to attack in the eyes of independents and millennials, are Joe Biden (see here for a very long list of his sins) and Kamala Harris, the aggressive, anti-pot pot-smoking prosecutor.

Of course, something surprising could happen between here and there — this is a way-too-early handicapping of the race. And frankly, I hope something surprising does happen; for example, I would love to see the palace coup I mentioned above, though I’m not holding my breath.

The wild card seems to be the amount of support the Sanders-like candidate gets. If that person’s support is wildly off the charts, if she or he is ahead by miles, the refs can’t steal the primary. Otherwise, it’s going to be bumpy ride all the way into November.