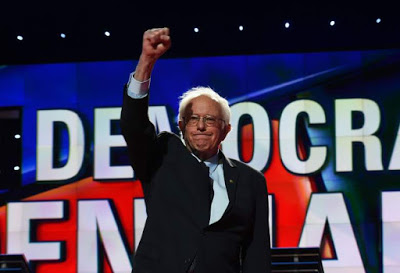 What is Bernie Sanders looking for in a potential vice-presidential pick? What should he be looking for? These two questions, while it may be too early to ask them, are nonetheless worth considering.

For one thing, the issue of Sanders’ age, for those who are inspired by his policies, can be easily countered if he chooses a vice-president who is a) younger and b) just as progressive or nearly so. Questions about his age are appearing now. So let’s take an early look at potential Sanders vice-presidential picks.

Who Is Bernie Sanders Most Likely to Choose?

As the video below points out, Sanders has already said that he was looking for someone who is “maybe not of the same gender as I am, and maybe somebody who might be a couple of years younger than me, and somebody who can take the progressive banner as vice-president and carry it all over this country to help us with our agenda and help us to rally the American people.”

These criteria produce many choices, and the video lists them:

Of these, Harris is a strong campaigner but not very progressive. Though she’s been presenting her progressive social justice side recently, she has a history in California as a tough prosecutor, including of minorities and including for minor drug crimes. She has enough negatives to make her vulnerable on social justice and prosecution of bank fraud, both important Sanders issues.

Gabbard is also a strong campaigner, but doesn’t have much of a relationship with Sanders. Her background and résumé also raise questions that have yet to be answered, for example about her support for Modi in India. Her polling is also extremely low.

The young congressional women — Tlaib, Omar, Jayapal — seem unlikely choices. All are too unknown; Omar is too controversial (due in part to her own party’s attacks on her); and Omar is not a natural-born U.S. citizen. Nina Turner is a possibility given her relationship with Sanders and Our Revolution, but may not pass the experience test. Marianne Williamson has no government experience at all (though she is an excellent speaker and might be a desirable choice anyway based on policies she supports).

Stacy Abrams is not polling very well, and while she’s considered a progressive by the media, many of her policies are not, and she recently joined the Board of CAP, the Center for American Progress, where she said this: “Led by the extraordinary Neera Tanden, CAP has been at the forefront of progressive policy development and activism for years. Together, we will find and support bold solutions on health care access, voting rights, the economy, and other critical issues our nation faces.”

CAP’s positions on Medicare for All and economic issues, among many others, are decidedly neoliberal and decidedly donor-driven. For this reason, I’d be shocked and disappointed if Sanders chose Abrams.

That leaves Elizabeth Warren, who in many estimations is the most likely woman to be chosen, if Sanders chooses a woman.

Note: The video acknowledges (at 10:57) that “Bernie supporters remember her failure to back him during the 2016 primaries.” I think this is one of the reasons that Warren hasn’t gained traction this year among the strongest Sanders supporters on social media, and may partially account for her low polling. After all, in the early days of the 2016 primary, “Run Liz Run” was quite the rallying cry.

Warren has failed to recapture her 2015 “Run Liz Run” magic this time around, which helps explain her mid–second tier polling among 2020 Democratic candidates — she’s below people like Harris and above people like Klobuchar, with the Pete’s and the Beto’s of the world floating up and down, above her and below, as the moment and local political winds may move them.

Yet Warren’s weaker position may actually work out to Sanders’ advantage, as I’ll detail in a future piece. It may also work to Warren’s advantage as well — given her lower polling, she’s unlikely to feel she has to attack Sanders to capture his place alongside the ephemeral Joe Biden.

There are negatives, of course, to choosing Warren. Her favorability rating isn’t particularly high — I know a number of Republican voters who would strongly consider Sanders over Trump but would not consider Warren — yet that may not be an issue were she second on the ticket. In addition, she doesn’t add geographic diversity and she doesn’t have special expertise, for example, in foreign policy, that supplements what Sanders offers.

Non-Warren alternatives suggested in the video include:

• Andrew Yang — a tech-savvy entrepreneur with many progressive policies who knows how to talk to rust-belt and disaffected workers (for example, see 15:05 in the video above)

But neither of these people, plus others like Beto O’Rourke, are choices Sanders would make. To start, Yang is too unknown (and male), Buttigieg is too neoliberal. (and male). There are other reasons for Sanders to avoid them as well, and I think he will.

It looks almost certain therefore that Warren will be his VP choice. The question then becomes, when should he announce it?