Yves here. Helmer’s sources argue the defense strategies for Assange in his extradition case in the UK and how they might play out. Although the deck is stacked against Assange, his cause is not hopeless. For instance, his case has been assigned to a judge noted for her independence. The case looks likely to extend till past the next general election, and if Labour were to take power, a change in the UK’s posture toward Assange could also have an impact. The case for and against Julian Assange (lead image, 3rd from left) will keep him in the UK for at least eighteen months, probably two years, possibly three, according to leading London lawyers.  The UK will have a new government by then; the US too.

In the interval, Assange’s lawyers are preparing to prove the US indictment for conspiracy to commit computer hacking will be superseded by espionage charges. That, they will argue, requires the Westminster Magistrates’ Court to throw the US extradition application out. In addition, their  evidence for American  political motivation in the prosecution of Assange, and of US violations of the UK and European standards for a fair trial in an independent and impartial court, will be presented. The Chief Magistrate, Emma Arbuthnot, is likely to preside. The hearing is unlikely to start before December of this year.

The more UK and US Government officials take sides in public against Assange and support the allegations in the indictment, the stronger his case will be in court. The announcement by public letter  to the Home Secretary last week that seventy-one members of the British parliament oppose Assange’s extradition to the US cuts even more of the ground from under UK prosecutors and the lawyers who will appear in court for the US.

Reversing their campaign to block the Swedish extradition warrant between 2010 and 2012, Assange’s lawyers are also mobilizing to have the Swedish prosecutors return to London with a new warrant, so that this can stretch out the legal wrangling in London for long enough to reach a new British election. If won by Jeremy Corbyn and the Labour Party forms a new government, Assange may benefit from a decision to move Assange’s prosecution to the UK courts, and then to release him.

“The anger for and against this man is extraordinary”, explains a leading London lawyer on extradition cases. “You need very technical lawyering now, and Assange will have to pay for it.  But in parallel there will be the PR campaign amplifying the political issue, principally for the Labour Party. The Assange case will stand for every British voter’s idea of what [President Donald] Trump and the Americans are doing to the world.  [Chief Magistrate Emma] Arbuthnot is not afraid to make decisions that would be unpopular. But as independent as she is, the pressure on her will be huge not to rule against the US.”

“And so it is for the British court system. Either the courts are bending to the US or to the anti-American movement. It’s going to take a bloody long time and a bloody waste of public money”

It was Assange’s defeat in the Supreme Court, the highest of the British courts,  on May 30, 2012, which triggered within days his move to the Ecuador Embassy in London and his asylum there, which ended last week.  Read the judgement in full here.

That case turned on the technical legal issue of “judicial authority”; that was whether the Swedish prosecutors’ warrant of arrest for Assange on sexual molestation and rape charges was lawful in the UK. The court decided it was, but it was a split decision. Two of the seven judges ruled in Assange’s favour.

The Swedish charges were based on allegations by two women for events which took place in Sweden in August 2010. The timing was five months after Assange began the process of publishing the US military files obtained by Chelsea Manning; the most important of these was the secret US film of a US Army helicopter attack on Iraqi civilians, killing 18 – evidence of a war crime. The US indictment of Assange, released last week,   identifies the dates of his alleged offences with Manning between March 2 and 10, 2010. This timing will prove to be important later in the British courts because Assange’s whereabouts in March of 2010 aren’t mentioned in the US indictment. New York Times reporting indicates he was in London. If he was in the UK when the alleged offences took place, and if he was publishing from the UK, then his lawyers will make the case that the appropriate forum for a trial on the US charges is in a British court, not an American one.  “The forum argument”, says a London legal source, “has prevailed recently but so far only for British citizens operating in the UK.”

The source says that if Assange were able to win the forum argument,  requiring the prosecution on the American charges to be moved to the UK, it would be up to the Director of Public Prosecutions (DPP) to decide whether to do so, or not.  If the Conservative Government has been replaced by Labour, by the time the DPP would face a decision on Assange, Prime Minister Corbyn would have the authority to stop the proceeding. 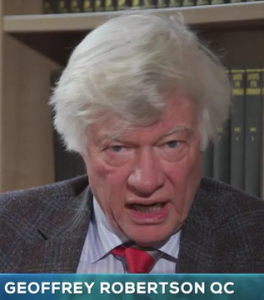 “He’s not facing justice in the UK,” Assange’s principal London advocate, Geoffrey Robinson QC said (minute 19:40) on Saturday.  “The justice he is facing is justice, or injustice, in America… I would hope the British judges would have enough belief  in freedom of information to throw out the extradition request… I have faith in them. But whether I have faith in the US Supreme Court is another matter.”

Robertson  means that the first line of defence for Assange will be to put the US on trial in the magistrates’ court for politically motivated persecution, torture (of Chelsea Manning), and multiple abuses by US courts in national security cases. In short, the Article 6 argument. This refers to Article 6 of the European Union Human Rights Convention;   this is incorporated in the UK’s Human Rights Act of 1998.

Justice Arbuthnot (right) has been clear in two judgements last year that the Russian Government fails a key test on this standard.

In the case of a Russian warrant for fraud and embezzlement by a Rosneft executive and one-time board director, Andrei Votinov, Arbuthnot concluded “this is one of those exceptional cases where the defendant [Votinov] has shown there is a real risk that he will suffer a flagrant denial of justice if he were to be extradited to the Russian Federation.” Although Arbuthnot ruled against experts testifying that there was political motivation in the case against Votinov, she dismissed the warrant. Read the details, and the Arbuthnot ruling, here.

“There is evidence in this case of a close tie between big business and politics,” Arbuthnot decided. “Professor Sakwa says Mr Votinov was resisting Mr Sechin’s political machinations and that is why he is being prosecuted. In the Russian Federation it is often hard to distinguish between politics and business and therefore I find that the circumstances set out by the Professor if proved might fall within the definition of section 81 [of the Extradition Act].  I find no evidence however, sufficient to support the bar [to extradition].”

In the case of alleged Russian bank fraudster Ilya Yurov, Arbuthnot accepted expert evidence on the conditions of Russian prisons. She also accepted that Russian courts are susceptible to government pressure in high-profile cases. “I cannot see how [Yurov] could not be prejudiced… there is a real risk he will suffer a flagrant denial of justice. His would be a very high-profile prosecution of particular interest to the [Russian state] and these are very exceptional circumstances.” Yurov was released from his bail and the Russian extradition application dismissed. Read the story here.

For the first time ever in an international court, Assange’s lawyers will be arguing that in this case US prosecutors and US courts  are no better than the Russians; in the prosecution of Assange and Manning  they will argue the Americans are worse.  “The US will come into court very well prepared”, according to a London lawyer. “It’s a rarity for any British court to rule against the US, though this has happened recently on different grounds. Arbuthnot has been tightening the definition of what is ‘political’ in these cases. I can’t see [Assange] winning on the US prejudice argument.”

Baltasar Garzon, the former Spanish magistrate now representing Assange in Ecuador,  has foreshadowed the presentation of evidence of US Government manipulation in Ecuador to force Assange’s expulsion from the embassy.  “The threats against Julian Assange for political motives and the persecution by the United States,” he said, “are more alive than ever. Recently, Wikileaks has been branded a terrorist organization.”

Extradition and human rights lawyers who are not engaged for Assange are certain his case will continue in the British courts for a long time – years for all the arguments to play out in the Magistrates’ Court, the High Court, and the Supreme Court. They are divided on what they believe the outcome will be for Assange. Few are confident that a British judge will rule that the US prosecutors and courts are no better than their Russian counterparts, and dismiss the extradition case against Assange.

There is more confidence, however, that on a narrower issue the lawyers call the specialty rule argument, the British judges may decide in Assange’s favour.  According to the UK-US extradition treaty of 1972, a 2003 Act of Parliament, and decisions of the British courts, it is unlawful for the US to indict, try and punish an individual for an offence that is different from the one for which he was  extradited from the UK. “Special arrangements” or “special rules” must therefore apply to the Assange case, the lawyers agree. They point to a High Court case in 2006, when two men were sought for extradition from the UK on US fraud charges. “The US contends,” the court reported, “that it observes the specialty rule, as a rule of international law and comity, in its trial and punishment of those who are extradited to it. That is hotly contested in this appeal… [the defendants argued that ] the US habitually violated the spirit and purpose of the specialty rule… The gravest of the particular charges… was that the US Government would seek and the US Courts would uphold a conviction based on a superseding indictment which alleged offences for which extradition had actually been refused by the UK Government”;  for the full decision, click to open.

The judges in that case decided there was insufficient evidence for the specialty argument, and agreed to the US extradition. He also ruled that a superseding indictment would not be legally acceptable in a US or UK court “if there were evidence that the UK Government had objected or would object to it.”

Sources in London are critical of media speculation that the current US indictment against Assange is a fake, and will be replaced by a new charge of espionage once he is in US hands. Robertson for Assange is more guarded. He has conceded that the US prosecutors may intend to supersede the current indictment, but he signals that this suspicion will be tested in court. His argument will then be that the Americans cannot be trusted to seek the permission required for a new charge.

On proof of that point rests Assange’s best chance of release.