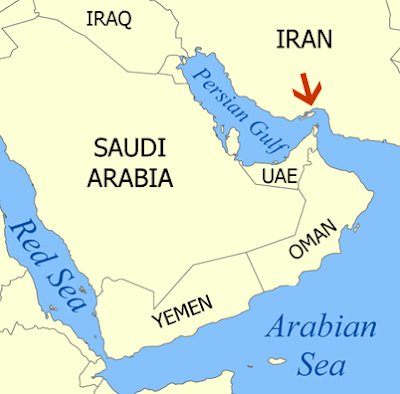 The red arrow shows the Strait of Hormuz, one of the most important shipping lanes (and bottlenecks) in the world. It’s also within Iran’sUN-defined “territorial water” if it wishes to make that claim.

“‘Anyone can go to Baghdad; real men go to Tehran’, an administration official was heard saying shortly after the fall of Baghdad” (source).

This quip was then widely transmuted to the much more macho (and euphonious) “Boys go to Baghdad. Men go to Tehran”:

My first encounter with the phrase came late in 2003 when, newly enrolled in graduate school, I gathered in the department lounge with a group of first-year students for an ad hoc session on foreign policy. With the Bush administration still mobilizing consent for America’s second go-around with Iraq, a very conservative, very well connected classmate shared with us what he was hearing from his friends inside the government. Overthrowing Saddam Hussein was but the first step in a larger project, he said in a whisper, as if to make us accomplices in a tragic conspiracy. Iran would be next. “Boys go to Baghdad,” he intoned, “but men go to Tehran.”

The Trump administration is the latest to ride that train. It’s now the stated policy of the United States to aggressively reduce all Iranian exports “to zero”:

“President Donald J. Trump has decided not to reissue Significant Reduction Exceptions (SREs) when they expire in early May,” the White House said in a statement. “This decision is intended to bring Iran’s oil exports to zero, denying the regime its principal source of revenue.”

Yet it’s one thing to declare a sanctions regime that tries to prevent all Iranian oil from reaching the market; Iran has dealt with sanctions before and survived. It’s another to classify all oil owned by the National Iranian Oil Company (NIOC), an affiliate of the Iranian Revolutionary Guard, as the property of a terrorist organization, as the U.S. has in effect done — and then declare an international sanctions regime against that oil, with no waivers, sanctions that affect China, India, Turkey, Japan and South Korea.

Those sanctions started May 1. If no one backs down, this path leads to war.

From a good analysis by Scott Ritter of the latest U.S. assault on Iran (emphasis added):

What if Iran Retaliates and Shuts Down the Strait of Hormuz?

Some 18 million barrels of oil transit through every day. The economic impact would be catastrophic.

…There is a major difference between 2018 and today, however. The recent decision by the Trump administration to declare the Iranian Revolutionary Guard Command (IRGC) a terrorist organization has complicated the issue of Iran’s oil sales, and America’s reaction in response.

The IRGC has long been subject to U.S. sanctions. In 2012, the U.S. Department of Treasury, Office of Foreign Assets Control (OFAC), determined that National Iranian Oil Company (NIOC) was an “agent or affiliate” of the IRGC and therefore is subject to sanctions under the Iran Threat Reduction and Syria Human Rights Act of 2012 (ITRSHRA). Other Iranian oil companies have likewise been linked to the IRGC, including Kermanshah Petrochemical Industries Co., Pardis Petrochemical Co., Parsian Oil & Gas Development Co., and Shiraz Petrochemical Co.

While in 2012 the United States determined that there was insufficient information to link the National Iranian Tanker Company (NITC) as an affiliate of the IRGC, under the current sanctions regime imposed in 2018 the Islamic Republic of Iran Shipping Lines (IRISL) and the NITC have been blacklisted in their entirety.

By linking the bulk of Iran’s oil exporting capacity to the IRGC, the United States has opened the door to means other than economic sanctions when it comes to enforcing its “zero” ban on Iranian oil sales. Any Iranian oil in transit would be classified as the property of a terrorist organization, as would any Iranian vessel carrying oil.

Likewise, any vessel from any nation that carried Iranian oil would be classified as providing material support to a terrorist organization, and thereby subject to interdiction, confiscation, and/or destruction. This is the distinction the world is missing when assessing Iran’s current threats to close the Strait of Hormuz. It’s one thing to sanction Iranian entities, including the IRGC—Iran has historically found enough work-arounds to defeat such efforts. It is an altogether different situation if the Unite[d] States opts to physically impede Iran’s ability to ship oil. This would be a red line for Iran, and a trigger for it to shut down all shipping through the Strait of Hormuz.

Ritter points out that, so far at least, “U.S. naval and commercial vessels transiting the Strait of Hormuz continue to respond to the queries transmitted by the IRGC naval forces responsible for securing Iran’s portion of the strategic waterway—an awkward reality given that the IRGC has been designated a terrorist organization, which means the U.S. Navy freely communicates and coordinates with terrorists.”

But what will happen when the sanctions inevitably fail? As Ritter points out, Iran’s Foreign Minister has bragged that “Iran has a PhD in sanctions busting.” Will the “real men” in the Trump administration — the Pompeos, the Boltons, and Trump himself perhaps — be forced to “do something” or sacrifice their manhoods on the altar of pointless threats?

If the U.S. attempts to deny or restrict traffic through the Strait, Iran could enforce the 1982 United Nations’ Convention on the Law of the Sea that grants all countries the right to declare its “territorial waters” out to a maximum of 12 miles from the coastline, and then close the Strait to all U.S. shipping. Ritter is certain this is their next step if the U.S. tries to “do something” to enforce its failed sanctions.

What then? Do “real men” back down or respond with force? If the U.S. does respond militarily to Iran closing the Strait to U.S. shipping, the U.S. will be the aggressor under international law, and this time few nations that matter will support us.