The Race to Develop the Moon New Yorker

Petition wants all disposable menstrual products to be plastic-free Treehugger

A Mystery Frequency Disrupted Car Fobs in an Ohio City, and Now Residents Know Why NYT (The Rev Kev)

How ‘I got a plan’ became a thing: Warren nerds out and the crowds go crazy Politico

Why Joe Biden Might Be the Best Bet to Beat Trump New York magazine. Andrew Sullivan. Offered up to start discussion…

On campaign trail, Biden keeps his hands to himself Politico

Brexit: retreat to the bunker EUReferendum.com

Rory Stewart declares he would like to be prime minister Guardian

Bosses must dare to leave their bubble FT (david l)

Rory Stewart may have got out of jail free, but prisoners are still suffering excruciating conditions Independent

Inside the tower block refurbished for luxury living FT

‘Either They Kill Us or We Kill Them’ NYT (re Silc)

How Fear Contributes to Cops’ Use of Deadly Force Marshall Project

Boeing Knew About Safety-Alert Problem for a Year Before Telling FAA, Airlines WSJ

Israel Again Bombs Gaza – But Is It “In Response”? Moon of Alabama

Bolton: US deploying bombers to Middle East in warning to Iran Al Jazeera

Turkey says it will not bow to U.S. sanctions over S-400 deal Reuters

The Left Needs to Stop Crushing on the Generals American Conversation

In abrupt move, Donald Trump says 10 per cent China tariffs will rise to 25 per cent on Friday SCMP

India’s rural pain goes beyond farmers, and it may be a problem for Modi Reuters

The Readers’ Editor writes: India is in the midst of a water crisis. Why isn’t it an election issue? Scroll

Extreme Events in the Himalayan Region: Are We Prepared for the Big One? The Wire

Despite International Law Which Would Make It Illegal, Pompeo Claims US Attack on Venezuela “Would Be Lawful” Common Dreams

Trump: ‘Mueller should not testify’ Politico

Antidote du Jour. From reader MGL, pyrrhuloxia @ feeder at Bosque del Apache, NM, DEC 2018. Jerri-Lynn here. Happens to be one of my favourite places to bird in the US: 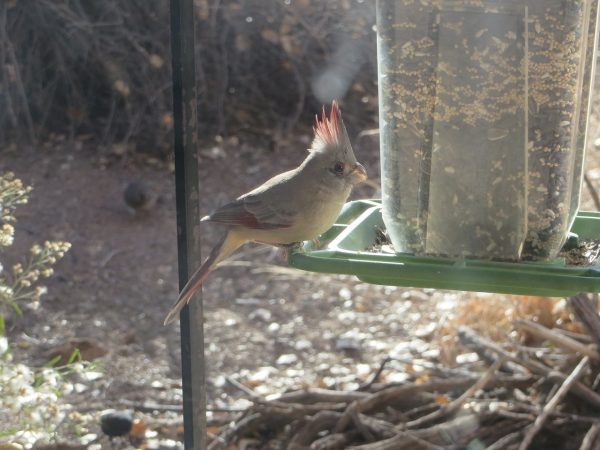