Yves here. Even though this post covers known territory, it seems worthwhile to encourage those of you who haven’t watched the “Collateral Murder” footage to view the full version. It’s important not only to keep the public (and that includes people in your personal circle) focused on what Assange’s true hanging crime is in the eyes of the officialdom….and it ain’t RussiaGate. That serves as a convenient diversion from his real offense. That effort has a secondary benefit of having more people watch the video. 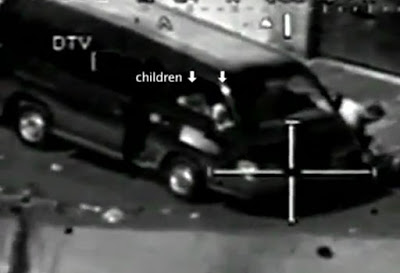 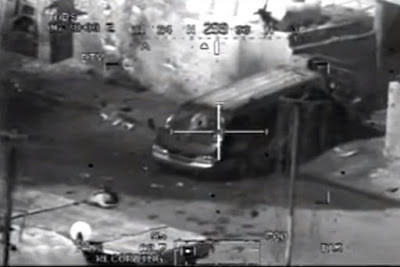 Before and after images of the van that came to pick up the bodies of eleven men shot to death by circling American helicopters in Iraq in 2007. Both children in the van were wounded. “Well, it’s their fault for bringing their kids to a battle,” said one of the pilots. “That’s right,” replies another. From the video Collateral Murder.

Below is a full video version of Collateral Murder, the 2007 war footage that was leaked in 2010 to Wikileaks by Chelsea (then Bradley) Manning. This version was posted to the Wikileaks YouTube channel with subtitles. It will only take about 15 minutes of your life to view it.

It’s brutal to watch, but I challenge you to do it anyway. It shows not just murder, but a special kind of murder — murder from the safety of the air, murder by men with heavy machine guns slowly circling their targets in helicopters like hunters with shotguns who walk the edges of a trout pond, shooting at will, waiting, walking, then shooting again, till all the fish are dead.

The film also shows war crimes that implicate the entire structure of the U.S. military, as everyone involved was acting under orders, seeking permission to fire, waiting, then getting it before once more blasting away. The publication of this video, plus all the Wikileaks publications that followed, comprise the whole reason everyone in the U.S. who matters, everyone with power, wants Julian Assange dead.

They also want him hated. Generating that hate is the process we’re watching today.

“Everyone” in this case includes every major newspaper that published and received awards for publishing Wikileaks material; all major U.S. televised media outlets; and all “respectable” U.S. politicians — including, of course, Hillary Clinton, who was rumored (though unverifiably) to have said, “Can’t we just drone this guy?”

Yes, Julian Assange the person can be a giant douche even to his supporters, as this exchange reported by Intercept writer Micah Lee attests. Nevertheless, it’s not for being a douche that the Establishment state wants him dead; that state breeds, harbors and honors douches everywhere in the world. They want him dead for publishing videos like these.

Please watch it. The footage shows not only murder, but bloodlust and conscienceless brutality, so much of it in fact that this became one of the main reasons Chelsea Manning leaked it in the first place. As she said at her court-martial: “The most alarming aspect of the video for me, was the seemingly delight of bloodlust they [the pilots] appeared to have. They dehumanized the individuals they were engaging with, and seemed to not value human life in referring to them as ‘dead bastards,’ and congratulating each other on the ability to kill in large numbers.”

The Wikileaks page for the video is here. A transcript is here.

This was done in our name, to “keep us safe.” This continues to be done every day that we and our allies are at “war” in the Middle East.

Bodies pile on bodies as this continues. The least we can do, literally the least, is to witness and acknowledge their deaths.