Serious auto-loan delinquencies – 90 days or more past due – jumped to 4.69% of outstanding auto loans and leases in the first quarter of 2019, according to New York Fed data. This put the auto-loan delinquency rate at the highest level since Q4 2010 and merely 58 basis points below the peak during the Great Recession in Q4 2010 (5.27%): 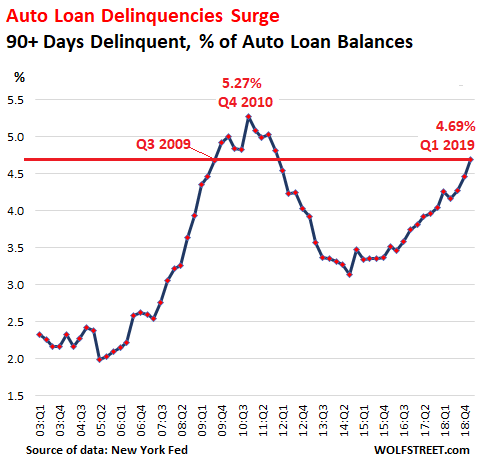 These souring auto loans are going to impact banks and specialized lenders along with the real economy – the automakers and auto dealers and the industries that support them.

This is what the banks are looking at.

The dollars are big. In Q1, total outstanding balances of auto loans and leases rose by 4% from a year ago to $1.28 trillion (this amount by the New York Fed is slightly higher than the amount reported by the Federal Reserve Board of Governors as part of its consumer credit data). Over the past decades, since in Q1 2009, total auto loans and leases outstanding have risen by 65%.

But the number of auto-loan accounts has risen only 34% over the decade, to 113.9 million accounts in Q1 2019. In other words, what caused much of the increase in the auto-loan balances is the ballooning amount financed with each new loan and longer loan terms that causes those loans to stay on the books longer.

The chart below shows the dollar amounts of auto loan balances (blue columns, right scale) in trillion dollars and the number of auto-loan accounts (red line, left scale) in millions: 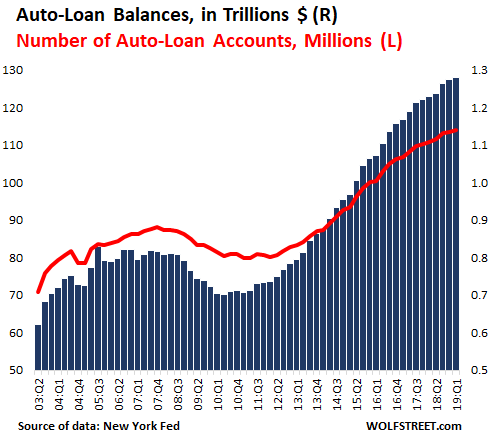 Of this ballooning amount of auto loans, 4.67% is seriously delinquent (90+ days). This amounts to $60 billion. This chart shows the trajectory of what the banks and specialized lenders are facing, in billion dollars: 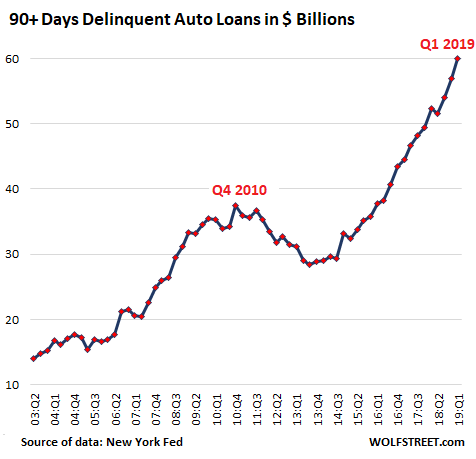 For lenders, these delinquent loans don’t represent total losses. This debt is collateralized by vehicles, which can be repossessed without much of a delay – unlike foreclosing on a house. But generally, the loan amount is far higher than what a repossessed vehicle will bring at the auction. Perhaps the banks can recover 50% on average of the loan amount. So, if all of the current vintage of 90+ day delinquencies turn into repossessions, and the banks lose 50% on them, it would amount to $30 billion in loan losses.

But there are more loans going delinquent even as we speak, and they will become seriously delinquent in Q2, and the next batch in Q3, and so on, and this is working itself forward wave after wave. So the cumulative losses over the next two years will be higher.

These losses are spread over thousands of banks, credit unions, and specialized non-bank lenders, and over asset-backed securities holders, such as pensions funds, other institutional investors, and bonds funds, and most will get through this by just licking their wounds. But some smaller subprime-focused non-bank lenders will collapse, and a few have already collapsed. So these defaulted auto loans are going to hurt, and they’re going to take down some smaller lenders, but they’re not going to take down the US banking system. They’re just not big enough.

This is what automakers are facing.

Lenders have already figured out that subprime auto loans have soured. They’ve been seeing this since 2015 or 2016. And ever so gradually, lenders have tightened their subprime underwriting standards. And subprime customers that don’t get approved for a new-vehicle loans may get approved for a much smaller loan for a cheaper used vehicle. This process has already been shifting potential new-vehicle customers to used vehicles.

For automakers, this has already shown up in their sales. New-vehicle sales, in terms of vehicles delivered to end-users, peaked in 2016 and have been declining ever since. Through Q1 this year, new-vehicles sales, fleet and retail, were down 3.2% from Q1 2018, and so 2019 looks to be another down-year for the industry – the third in a row.

This is not a sign of a worsening economy, but a result of years of aggressive and reckless auto lending, aided and abetted by yield-chasing investors piling into subprime auto-loan backed securities because they offer a little more yield in an era of central-bank engineered financial repression. It’s a sign like so many others in this economy, that the whole credit spectrum has gone haywire over the years. Thank you Fed, for having engineered this whole thing with your ingenious policies. So now there’s a price to pay – even during good times.

And we already know what a scenario looks like when the cycle turns, when unemployment surges and millions of people lose their jobs and cannot make their car payments, even people with a prime credit rating – that will then turn into subprime. We know what happens to the auto industry when the economy dives into a recession. We know what this will look like because we’ve seen it before. The auto industry is very cyclical.

The surprise was in the SEC 10-Q filing when no one was supposed to pay attention. Read...  Tesla Discloses Record Pollution Credits for Q1: Without Them, it Would Have Lost $918 Million and Bled $1.14 Billion in Cash