Yves here. While I agree with Neuberger that the fight that really counts for the direction of the US is within the Democratic Party, it is unfortunate that this struggle is being personified, as in too often treated by the media and political operatives as being about Sanders. The fight is really about whether the Democrats will remain the party of the top 10% or will be bludgeoned into representing working people on a broad basis. 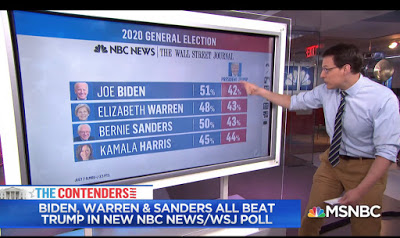 Steve Kornacki, MSNBC’s so-called “numbers guy,” visually misrepresents Sanders’ strength against Trump, then lies about the erroneous graphic: “Elizabeth Warren, she’s been running second place, she is running second place on the Democratic side. She leads Trump by 5 points.” The graphic shows that Kornacki is obviously wrong. Warren is in third place, and Sanders’ margin against Trump is greater than Warren’s.

Sanders is the revolutionary. His election would mean a complete overhaul of the Democratic Party, forcing everyone who ever worked for a Clinton to look toward the private sector. That’s what a vote for “change” would mean in 2020.

We’ve been hearing quite a bit about how the 2020 election is an “existential battle” for control of the nation’s future, and that Trump’s re-election poses an “existential threat.” For example:

Jennifer Rubin, Washington Post: “we are in a fight for our democracy and our decency; we are engaged in an existential battle to defend objective reality”.

Chauncey DeVega, Salon: “Trump is promising an authoritarian “national renewal” to his white supporters through a fake populism that nurtures feelings of grievance and victimhood — feelings that can only be remedied through loyalty to the Great Leader and Dear Father. Political violence will be necessary — and is already taking place across the country — because TrumpWorld and its members believe that they are in an existential battle for survival.”

Matt Taibbi, Rolling Stone, reporting from Iowa: “In a mid-June appearance in Iowa, Biden tipped off reporters that he’d be making remarks about Trump. Dressed in dark-wash dad jeans and blue shirt, he became the 10,000th Democrat this year to call the president an ‘existential threat.'”

That 2020 existential battle, of course, is always cast as between the Democrats and the Republicans.

But there’s another existential battle going on, one that will occur before the main event — the battle for control of the Democratic Party. In the long run, that battle may turn out to be more important than the one that immediately follows it.

Matt Taibbi, from the same article:

[T]he undeniable truth is that the Democratic race is about Sanders. Most of the candidates either support Medicare for All or try to sound like they do. They also tend to support a $15 minimum wage and call for wealth taxes, a Green New Deal, antitrust actions, and some rejection of corporate donors. Even Joe Biden, he of the lengthy career deep-throating credit-card-industry bucks, has parroted Sanders’ anti-corporate themes, noting that the Constitution reads “ ‘We the People,’ not ‘We the Donors.’ ”

There is an irony in the fact that Sanders has become the bête noire of Clintonian politics, given that Sanders represents the culmination of Bill’s 1992 electoral formula: “Change versus more of the same.”

Decades later, this is no longer just a marketing formulation. About 20 of the candidates exist somewhere on the spectrum of traditional Democratic politics, with Klobuchar, Mayor Pete, and Biden on one side, and Warren on the more progressive end. Sanders is the revolutionary. His election would mean a complete overhaul of the Democratic Party, forcing everyone who ever worked for a Clinton to look toward the private sector. That’s what a vote for “change” would mean in 2020.

Before mainstream Democrats can begin the “existential battle” with the forces of Trump and Republicanism, they have to win the existential battle against the force that wants to force change on their own party.

They’re engaged in that battle today, and it seems almost all of the “liberal media,” sensing the existential nature of the threat, is helping them win it. Katie Halper, in a second perceptive piece on the media’s obvious anti-Sanders bias, “MSNBC’s Anti-Sanders Bias Is Getting Truly Ridiculous,” writes: “When MSNBC legal analyst Mimi Rocah (7/21/19) said that Bernie Sanders ‘made [her] skin crawl,’ though she ‘can’t even identify for you what exactly it is,’ she was just expressing more overtly the anti-Sanders bias that pervades the network.”

Halper then documents instance after instance of this bias, from graphics that show Sanders in fourth place in a poll in which he placed second…

.@MSNBC just posted this poll.
Why is Bernie listed below Warren? pic.twitter.com/GD8nO0xMJO

to Steve Kornacki presenting a different misleading graphic from a different poll, then reinforcing the visual error with a verbal lie (see above), to political analyst Zerlina Maxwell (and former Clinton staffer, though this was never mentioned) blaming Sanders on-air for not mentioning race until 23 minutes into a speech, when in fact he mentioned it at the five-minute mark.

Maxwell corrected her misrepresentation later when challenged about it…

.@ZerlinaMaxwell, I appreciate your work but you said Bernie didn't talk about race / gender until 23 min in.

At 3min: he thanked @shaunking for his work on criminal justice reform.

…but only on Twitter, and only while reinforcing her scorn for Sanders.

MSNBC is clearly acting as a messaging arm of the Democratic Party mainstream in its battle with progressives in general and Sanders in particular, and Zerlina Maxwell, who’s been variously employed by that mainstream, from her work with Clinton to her work on MSNBC, is an agent in that effort.

Let me repeat what Matt Taibbi wrote: “[Sanders’] election would mean a complete overhaul of the Democratic Party, forcing everyone who ever worked for a Clinton to look toward the private sector.”

If the nation wishes true deliverance, not just from Trump and Republicans, but from the painful state that got Trump elected in the first place, it will first have to believe in a savior.

Will it choose as its savior a radically overhauled Democratic Party? Or will it trust its salvation to a Party that, in the words of the Onion’s fictional, but accurate Nancy Pelosi, offers as “our core 2020 argument” that “we are infinitesimally less objectionable than our opposition.”

Welcome to the Democratic primary. In the long run, if mainstream Democrats win the first existential battle of 2020 and enter the second unreformed, how much of the nation will truly rally to their side and help them defeat the current Trump, or the next one, or the next one after that?

Will the nation still seek delivery from their pain, even after Trump is defeated, if indeed he is? And if they do, will they find it in an unreconstructed, money-driven Democratic Party, or go looking elsewhere again, perhaps to an elsewhere worse than the elsewhere the current Trump emerged from?