“You can’t nibble around the edges any more,” says Sanders in explaining his plan to essentially nationalize electricity production in the U.S. The full interview is here.

Bernie Sanders recently released his plan for implementing the Green New Deal. These include such comprehensive goals as transitioning to 100% renewable energy for electricity and transportation by 2030 and decarbonizing the entire economy by 2050 (full details here).

That kind of national emergency, a Bush-Cheney kind, implies an exercise of presidential power that approaches martial law, something that most pro-climate Democrats don’t contemplate. Does the Sanders plan contemplate a stronger-than-rhetorical response to climate change? It’s not clear yet from Sanders camp messaging.

The subject of emergency federal power does comes up though because of the breadth of the Sanders plan, and in particular, because of one key component:

The whole plan (again, I urge everyone to read it) has been called by some a “new Manhattan Project” and likened to FDR’s reshaping of U.S. industrial policy and capacity during World War II. As Juan Cole writes, “Sanders intends to push [fossil fuel] corporations aside and institute a Federal industrial policy that can make things happen. The analogy is what Franklin Delano Roosevelt accomplished during World War II, when US industrial capacity vastly expanded and 16 million men were mobilized and Social Security was implemented.”

The plan has rightly been likened to nationalizing electric power generation. Chris Hayes noted this fact in his recent interview with Sanders, calling the Sanders plan “a federal takeover of the whole thing,” to which Sanders essentially agrees (see video at the top). Other writers have said the same. For example, In These Times, under the headline “Bernie Sanders Calls To Seize the Means of Electricity Production” accurately describes the plan as “moving toward 100% public ownership of power.”

So there really is no doubt. Sanders, if he’s elected, plans to nationalize electricity generation in the U.S.

What are the implications of this proposal? The following seems either likely to occur or obviously true:

1. Bernie Sanders is serious about addressing climate change. Simply speaking, Sanders is right. It’s long past time for tinkering around the edges of the problem. This chart shows CO2 emissions per capita per country: 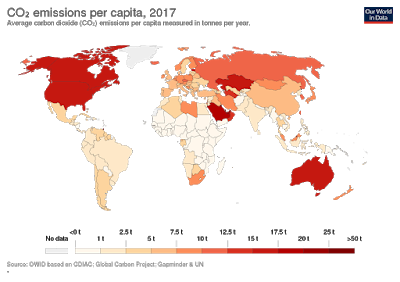 Yes, the rest of the world bears responsibility as well, but you have to start with what you can directly control, and the U.S. government can directly control U.S. carbon emissions, if it chooses to. (Dealing with the need for global response is also addressed in Sanders’ Green New Deal plan. I’ll take a separate look at how Sanders plans to globalize the U.S. initiative.)

Are the other candidates as serious about addressing and mitigating climate change at the fastest possible rate? I think several other candidates are sincere in wanting to, but don’t see any of them willing to act as forcefully, at least not so far in the campaign. This plan, therefore, lays down a marker for other pro-climate Democrats.

2. The institutional Democratic Party will respond to Sanders’ plan with fear and derision. In addition, their criticism will get widespread and supportive media coverage.

Sanders’ Green New Deal plan allows institutional Democrats to take the charge that Sanders is a “socialist” and part of the “hard left” to eleven, and they will not miss the opportunity to go all out. “Socialism” already smacks of communism, though the connection is usually made in Democratic and mainstream media circles by implication. (This incident, engineered by the producers of the early CNN Town Hall, is a rare counter-example.)

But a planned and federally directed “U.S. industrial policy” can be made to sound very much like a Stalinist “five-year economic plan,” and it wouldn’t be surprising if this comparison is made. It will be especially interesting to hear Elizabeth Warren’s response, since she’s made a point of saying “I’m a capitalist“; I’m almost certain she’ ll be asked to give one.

3. The response on the Right will be “government takeover!” I’ve seen hints already that those who set the agenda for frightened and agitated right-wing base voters are positioning the Green New Deal as a backdoor, left-wing plan for “government takeover” of the economy. In this, their language exactly parallels the language that markets Second Amendment fears to frighten right-wing voters.

The cry on the right will also cranked up to eleven, including by that master of marketing, Donald Trump, who has already started with the “we’re not socialist” rhetoric. Note that the clip at the top is sourced to a YouTube channel called “GOP War Room.” Expect a lot more of the same from sites with “liberty,” “freedom” and “Fox” in the name.

4. Finally, this is a conversation that absolutely must be had. Before the U.S. can begin to address climate change meaningfully, we must be open about what’s actually needed so voters can consider those courses of action, even if they end up rejecting them. Calling any discussion of the breadth of needed reform off-limits — whether done perniciously or with good intention — is like hiding a small elephant under a rug then throwing a cocktail party using the lump as a drinks table; the thing you’re avoiding adds fuel to your blindness.

Put simply, American voters must allowed to choose whether or not to address climate change meaningfully, regardless of the possibility that they may choose not to address it at all. An honest conversation is the least we owe voters whose descendants will ultimately thank them or hate them for what they finally decide. Letting voters choose for themselves is called democracy.

Despite the fears of many though, there are reasons for optimism. If voters are given a realistic discussion of the alternatives and a realistic presentation of the way to get there, they could easily choose well. They certainly chose well under FDR, when war raged in Europe and the Imperial Japanese wolf was at the door. It’s at least even odds they would choose as wisely again, when all of nature seems poised for their demise.