Even though yesterday was an earthshaking day in UK politics, with the Supreme Court delivering a stunning rebuke to Boris Johnson and repudiating the Queen’s ultimate authority by nullifying the proroguing of Parliament, it’s not clear how much of a difference this development makes for the Brexit trajectory. Per Clive’s hot take:

Great! Now Parliament can get back into session again. I’m sure it can’t wait to leap back into action and put through a… umm… err… well, it can now… hmm… let me see… anyway, it will now doubt resolutely (…tumbleweed…)

Which was consistent with Politico’s view many hours later, via its morning European newsletter:

What’s next? Brexit-skeptical MPs can resume harrying the government with urgent questions to ministers. They can keep demanding answers about the progress of the Brexit talks and the government’s preparations for no deal. All that scrutiny will be launched from what MPs regard as the moral high ground from today onwards. They can, in short, increase political pressure.

But to what end? MPs have already managed to rush through legislation which they said would prevent Johnson from taking the U.K. out of the EU without a deal. So on the face of it, Johnson’s best option is still to strike an agreement with the EU that can win enough parliamentary support to allow the U.K. to leave on October 31.

One clear winner is Speaker John Bercow, who looked like the cat that swallowed the canary after the Supreme Court verdict was read out. Johnson has clearly lost, as his curtailing his UN visit to rush back to the UK attests. But has he been mortally wounded, or does he still have a path to his October 31 Brexit?

The Supreme Court decision is quite clear that the judges saw the length of the proroguation and the Government’s failure to ‘splain why it needed so much time as acting in bad faith and clearly intended to thwart Parliamentary oversight. The vacating of the prorogue does not preclude Johnson from attempting a shorter prorogue of say four or five days to come with a Queen’s Speech laying out his agenda. That might have even been useful as an attempt at face-saving had Johnson not kinda-sorta said Parliament was getting in his way.

The forces opposed to Johnson want an extension to Brexit and presumably hope to defenestrate him after October 31. Nigel Farage would hope to make great inroads with the Tories who supported Johnson for his commitment to delivering Brexit do or die. However, Labour’s Brexit waffles and its increasingly visible civil war means many of its MPs would still not vote for a general election. And the Brexit Party threat would mean that the Tories would have reason to use the 1922 Committee process to get rid of Johnson and try again to install a replacement that would stick. But Johnson would continue to be Prime Minister during the contest, and he couldn’t be stopped from running to keep his post if he didn’t want to leave. (Note I am not up on the fine points of 1922 Committee executions; my assumption is they’d have to repeat the process that took place with May, of having MPs vote on leadership candidates until they winnowed the field down to two to then have party members choose).

In other words, and I would very much like UK readers to correct me, but until Johnson’s popularity falls with his base, he may be harder to turf out than it appears even as he lurches from debacle to debacle.

On the one hand, a new Telegraph poll shows 50% of the respondents supporting the Supreme Court decision and only 29% backing Johnson, which is similar to the results of a YouGov poll (49%/30%). On the other, at least as of the morning editions, the right wing papers still seem to be in Johnson’s corner: 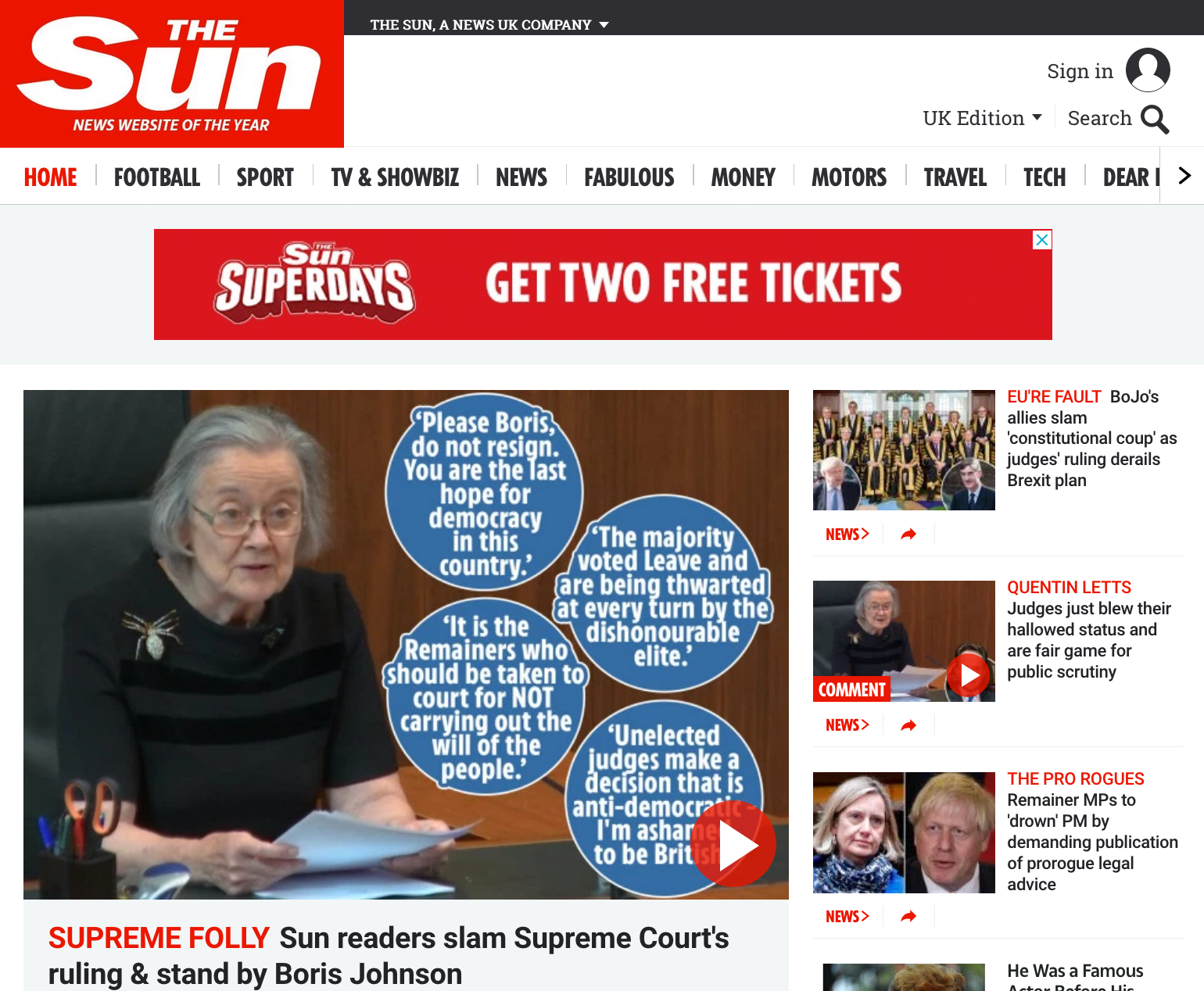 The Daily Mail, which moved away from being firmly pro-Brexit after a new editor came in recently, has a cover that seems pretty positive for Johnson, given the givens: 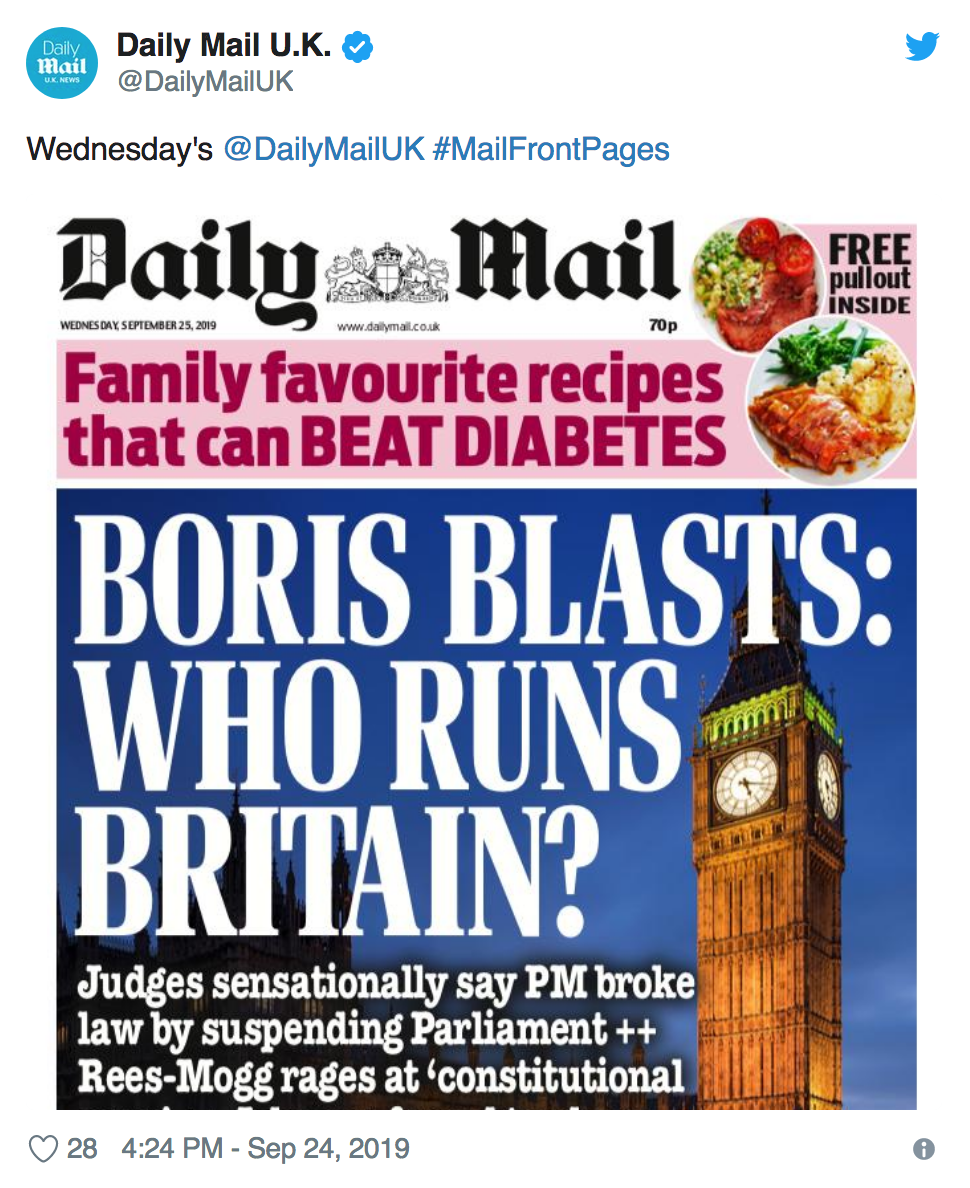 The Torygraph’s full page headline is a Johnson quote, “Let’s be in no doubt, there are a lot of people who want to frustrate Brexit.” The Financial Times and i focus on calls for Johnson to resign. The Metro instead focuses on Johnson’s defiance.

In reality, what happens in the next three and a half weeks is noise. Parliament will not approve of any Withdrawal Agreement, even if Johnson miraculously brought a new one back. Parliament will not vote for a general election. It is remotely possible that the Tories would start rattling 1922 Committee sabers, but Johnson just won a vote of party members with a high margin, and his personal approval rating with Tory voters is still high.

Johnson can take some interim steps, like sacking Dominic Cummings and Geoffrey Cox. From the Rob Wilson in Telegraph, in a sign that Johnson’s fans have not lost faith, are even calling for him to keep his too-clever-by-half adviser:

Following the Supreme Court judgement, it took approximately 30 seconds for the first politician to call for the Prime Minister’s resignation and then only a few minutes more for the knives to appear for his most senior Downing Street adviser, Dominic Cummings.

The pressure on both will be intense, and sadly but rather predictably, a small number of Tory MPs are briefing behind the scenes that Cummings must go.

Usually in politics calling for advisers to be sacked is a displacement activity for not being able to force out the real target. We all know the real target for these few disgruntled Tory MPs is the Prime Minister.

They realise, along with most MPs on both sides of the House of Commons, that Boris Johnson will probably win a general election against Jeremy Corbyn. Nothing from the Supreme Court changes that dynamic, indeed for Boris it merely adds to the list of establishment bodies trying to overturn the Referendum result and stop Brexit.

The Prime Minister, probably to the surprise of the metropolitan remainiacs, is likely to come out of this unnecessary and over-reaching decision by the Court much strengthened. His credentials as a champion of the people are reinforced, so in the circumstances those Tory MPs whispering in dark corners would be wise to remain away from the light as it could prove more fatal for their career.

Boris Johnson cannot and will not forsake Cummings because he knows that the normal rules of political engagement are gone, possibly forever. The Prime Minister needs the only adviser currently in Government who knows how to harness the chaos that exists thanks to Brexit and use it to their advantage.

RTE, an outlet you’d not expect to be on the same page as the Torygraph, came to broadly similar conclusions absent the Johnson fandom. PlutoniumKun quoted this section:

Whether through serendipity or strategy (probably the former) the prime minister has created a win-win situation that nobody seems to have noticed….

But what no one seems to have considered is that Boris is an explicitly populist politician. He will live to whiff-whaff another day. His whole approach to gaining the keys to No.10 has revolved around constantly responding to – and to some extent amplifying – the populist signal, not least over Brexit. In this context, a Supreme Court defeat risks simply playing into Johnson’s gameplan. It will not stop Brexit. But for Johnson and, especially for his shady apparatchiks, it will be yet another example of “them” (that is, the elite, the experts, the untouchables that wield power without responsibility) against “us” (the Great British public).

But as we pointed out, Parliament already made its play with the Benn Act, which requires the Prime Minister to request an extension to January 31 by Saturday October 19 if he has not secured a Withdrawal Agreement and gotten Parliamentary approval by then. Recall that the EU Council meetings are on October 16 and 17.

Although Johnson could try a gimmick like sending in a note asking for a Brexit and then try to negate the request via further commentary in the letter or sending in a second letter at the same time, the courts would likely see that sort of bad faith action as tantamount to not sending the request in at all. People like Gina Miller would anticipate moves like that (and Johnson’s team is so leaky that they might telegraph it) and would have a complaint ready that would only take some additional rush drafting to file. But even with a Monday October 21 filing, the time is awfully short for a case to go through lower courts and then be heard by the Supreme Court, since it would inevitably be appealed, in a mere two weeks. So Johnson may take a flier and bet that the courts won’t be able to move quickly enough. But this could work against him if he loses in the lower court and he can’t get the Supreme Court to stay its decision to hear the Government’s appeal.

And what does the EU Council do while this circus would be underway?

Readers may have brighter ideas, but Johnson’s best play might be to line up an EU member state or better yet at least four to veto an extension request. Given that EU members have to live with each other, single state could afford to impose Brexit on the rest of them and expect not to pay for that in some manner. But Johnson is widely mistrusted and even hated. What reason would state leaders have to help him? The most Johnson could hope to do is shore up the resolve of Macron and his allies who have had it with the “Waiting for Brexit” drama. But are there enough of them to stick together against the majority?

We have more questions than answers. But whether Johnson finds a way to live up to his promise to defy Parliament is the critical unknown.