It’s astonishing to see the ferocity of the effort to turn the tide against JJ Jelincic, the favorite to win the election for the CalPERS retiree board seat. It isn’t just that CalPERS is too obviously trying to fix the election, or that board members and employees are violating anti-corruption laws by using state resources to attack Jelincic and promote his opponent, the incumbent Henry Jones. It is also that this is the first CalPERS board election to feature dark money, and on top of that, it’s coming in at levels that dwarf the spending by the candidates.

It isn’t just insiders who’ve noticed the tidal wave of dark money. Even the retirees whose votes are being sought don’t like what they see. From reader ALM in comments:

I am a CalPERS retiree. Last week, I received my mail ballot on the same day that I received campaign mail bankrolled by “Concerned Retirees for Pension and Healthcare Security” who are even more concerned about secrecy because there is no trace of them on the internet. The envelope used was deliberately designed to give the appearance of official state mail sent to all CalPERS retirees at the direction of Fiona Ma in her capacity as State Treasurer….

This is the first dark money backed campaign mail that I have received in any CalPERS election.

The Sacramento Bee earlier today exposed the role of the union SEIU as the not-so-hidden hand behind the Fiona Ma mailer described above and dissected longer form in our companion post on the CalPERS elections today.

However, the article missed or chose to sidestep several key issue, such as the unprecedented magnitude of the spending, and the dubiousness of a union throwing its financial weight around to influence the election for the retiree seat, when the union represents effectively no retirees and hence has no proper role. Recall that six of the 13 board seats are elected by various classes of beneficiaries. It’s appalling to see the SEIU try to buy the retiree seat, one where unions don’t represent the votes, as opposed to the five others, where it has a more legitimate nexus.

As one connected retiree wrote:

Follow the money. Henry Jones has not represented retieree interests in the last 4 years. Local 1000 has zero retiree members – ZERO. He is owned by the unions. He’s a tool. Plus, CPF [California Professional Firefighters] and SEIU have an axe to grind because they spent big in the election that unseated Priya Mather. They were so arrogant they thought she couldn’t lose. Now they want revenge.

What concerns me more however is that “Health Care Providers” are listed as campaign contributors. These are insurance companies who contract with CalPERS!!!!! Henry has voted in favor of every single health insurance premium and co- pay increase since being on the board. No questions asked, even retirees contacted him with concerns. So, whose interests are really being served?

As we work through what we’ve been able to put together about the spending on this CalPERS board election, readers may be struck by how small the numbers are. Don’t be deceived. Influence comes cheap in Sacramento, particularly at CalPERS. The old line was that the price of a $100 million commitment was a steak dinner. Focus on the relative changes, and on the sudden emergence of covert spending.

Consider why are forces that want to remain hidden, but in many cases are tied to labor unions, so keen to defeat Jelincic, who you’d think they’d eagerly support as a candidate who has worked vigorously to protect worker pensions, particularly from Big Finance chicanery? We don’t have definitive answers. One possibility is that Jelincic’s probing of private equity fees and costs has led to other institutional investors taking that issue more seriously. That means he’s established himself as a threat to their bottom lines.

But why would unions work against their own members’ interests by standing up for private equity’s profits at the expense of pension returns? Due to space constraints, we’ll have to defer a full treatment to a later post. But the short version is that after the crisis, despite the fact that private equity firms are a direct threat to state and local tax revenues, due to their efforts to cut headcounts and wage increases, plus their indifference to bankrupting companies, and hence to government worker pay and employment levels, unions have perversely sided with public pension funds who are desperately betting on private equity as their salvation in a low-return environment.

As the retiree quoted above suggests, another group that may be out to stop Jelincic from returning to the board is health care industry members who see Jones as willing to rubber stamp premium increases (CalPERS is one of the largest health insrers in the US) as opposed to try ot contain costs.

Historically, all the official spending in a CalPERS board election comes from the candidates’ campaign funds. Unions have made contributions to these campaigns and also provided important informal backing, such as sponsoring “get out the vote” initiatives on behalf of their candidate. This year, there are two dark money groups supporting the campaign of incumbent Henry Jones:

Both have made official political filings that are false. Each claims to have been formed in recent weeks: Firefighters on August 22 and Concerned on August 26. Yet both have made large mailings. Firefights already made two of an expected four mailings, with the first “drop” arriving the same day that most retirees received their election packages, September 3 and 4. Given the lead times to execute a bulk mailing (design, printing, reserving capacity at the fulfillment house) and the financial commitments required, it is impossible for these mailings to have been financed by the newly-formed groups that are claiming responsibility for them. It’s the political version of Athena springing fully grown from Zeus’ forehead. That sort of thing only happens in mythology.

No house that would have handled a mailing of this size would have done so without having a large deposit. That in turn means the spending on the mailer was improperly and illegally funded and the Firefighters filing is false and therefore a violation of campaign finance laws.1

Concerned sent the Fiona Ma mailer that we discuss in our related post today. That started arriving to retirees on September 6 when Concerned submitted its initial filing on August 26.

Here are the current totals for both dark money groups:

The “Spent to Date” exceeding “Received to Date” for Firefighters is accurate and obviously highly irregular, as we’ll discuss shortly.

Bear in mind the election has over two more weeks to go, so expect these figures to rise. But contrast these amounts with the totals for recent board campaigns:

We’ll use the expenditure levels as the indicator of activity.

However, before you think this money arms race gap is fatal to Jelincic, bear in mind that what makes conventional campaigning so expensive is television ads, which are costly but widely viewed as effective. Notice that the political unknown Margaret Brown beat incumbent Michael Bilbrey who spent nearly 7 times as much as she did. In the context of CalPERS elections, Jelincic has previously said that spending beyond a fairly low threshold isn’t very productive. The dark money groups are testing that point of view and so far, they may be confirming it. For instance, a great deal of their spending on mailers has been wasted by being sent to union mailing lists which consist of current members who by definition aren’t voting in this election. In addition, many retirees are offended by the mailings and receiving them has only increased their support for Jelincic and has led some to promote his candidacy to other voters. Nevertheless, the raw display of muscle has to be disconcerting to Jelincic and his inner circle.

Moreover, only partway through this campaign, the total spending of both candidates and their backers is 3.1 times the amount spent by the two final candidates in a two-round contest in 2017, and 3.7 times the 2018 election expenditures in what was considered to be a hard-fought election.

The Sacramento Bee story did identify SEIU’s fingerprints on the mailer it sent with Treasurer Fiona Ma’s name displayed prominently on the outside and an July 15 letter from her objecting to Jelincic running for office inside. From its story:

The letter was sent by a newly registered political action committee named Concerned Retirees for Pension and Healthcare Security. The committee’s registered address matches that of SEIU, and a campaign finance filing lists “SEIU CA State Council” as a sponsor of the organization…

Jelincic is a former president of the California State Employees Association, a union that later became SEIU Local 1000.

As a different influential retiree noted: “Still not sure whether SEIU leadership is being paid or played.”

There’s more not to like. The committees are violating campaign finance requirements by not reporting donations or spending accurately, as evidenced by spending for Firefighters greatly exceeding the amount received, and both committees somehow miraculously executing major mailing campaigns before they existed.

Another abuse is in officially describing themselves as supporting Henry Jones when the a significant amount of their activity has been to attack Jelincic. For instance, from Concerned: 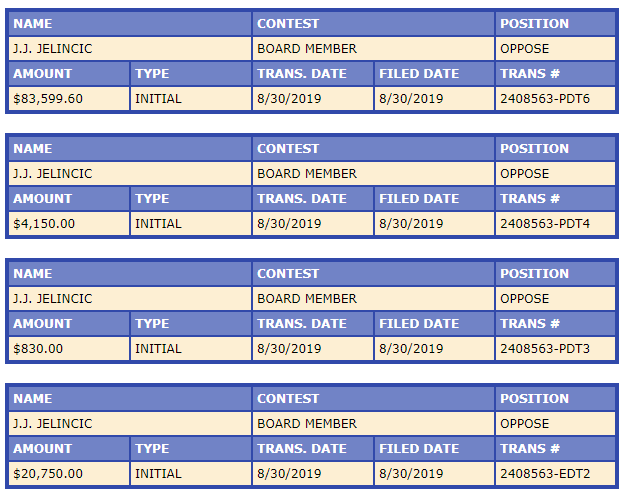 Perhaps the groups will clean things up and amend their filings to describe their purpose properly, as required, which is to oppose Jelincic as well as to promote Jones. But given their failure to report their activity on a timely basis, I wouldn’t hold my breath.

The bottom line is that this dirty campaign against Jelincic should be a wake up call as to how desperate his opponents are to thwart a candidate who has a clear track record of being an effective promoter of transparency and accountability. The fact that union leadership sees that at a threat should raise concerns among the rank and file.

1 Presumably, someone funded the mailer expenses covertly and then was reimbursed by Firefighters. But that’s not kosher.