Yves here. Wolf’s post focuses on the economic impact of the loss of Saudi oil production via drone strikes over the weekend. He thus skips over a point important to the geopolitically-minded: the Saudis have not confirmed US claims that the attacks are Iranian in origin and have asked the US to share its intel.

The attacks on Saudi Arabia’s largest oil-processing plant at Abqaiq and its second-largest oil field in Khurais on Saturday knocked out about 5.7 million barrels a day of output – about half of Saudi production and about 5% of global production. Saudi military officials told reporters on Monday that the preliminary investigation of “debris and wreckage” shows “it belongs to the Iranian regime,” and that the long-range drones were not launched from Yemen, as Iran-backed Houthi rebels there had claimed.

The White House has pointed the finger directly at Iran. Trump tweeted on Sunday that the US government was “locked and loaded depending on verification,” but was “waiting to hear from the Kingdom as to who they believe was the cause of this attack, and under what terms we would proceed!”

On Monday, the Wall Street Journal reported that “people familiar with the discussions” said that US officials said that intelligence suggests that the attacks were staged in Iran. Retaliatory strikes are being weighed.

Some of the production could be restored in days. But Bloomberg reported, based on a source, that “Aramco officials are growing less optimistic that there will be a rapid recovery in production.” Saudi Arabia can use part of its stock of about 645 million barrels of crude and petroleum products to make up for lost production in the near term. But “Aramco could consider declaring itself unable to fulfill contracts on some international shipments – known as force majeure – if the resumption of full capacity at Abqaiq takes weeks.”

In 2007, this scenario would have caused unspeakable upheaval and chaos in the oil markets globally, but particularly in the US, which at that time had relied heavily on Saudi oil. Prices would have hit astronomical levels and causing all kinds of wreckage.

The price reaction in the market was breath-taking of sorts, with the price of WTI spiking 13% to about $62 a barrel at the moment.

But wait: The US is stuck in an oil bust that started in mid-2014, after years when WTI traded between $90 to over $110 a barrel. By early 2016, the price of WTI had collapsed to $26 a barrel. The Fed pulled back from the four expected rate hikes in 2016 because the oil-and-gas sector was threatening to collapse, and credit was already freezing up for the sector, and bankruptcy filings occurred in rapid-fire sequence. The Fed was worried that the collapse of the industry and the freezing of credit could spread to other industries. 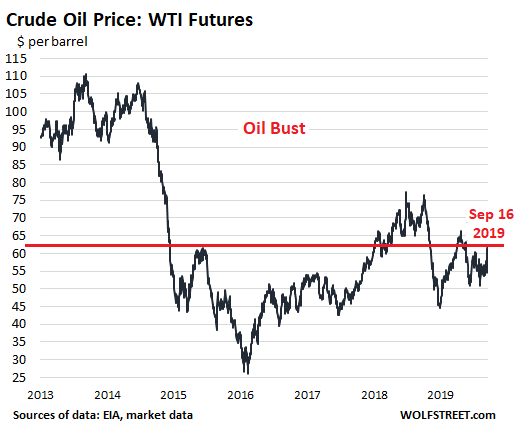 The most important factor that changed since 2007 is that US production of petroleum and petroleum products has skyrocketed by 142% from about 7 million barrels per day (bpd) in 2007 to about 17 million bpd: 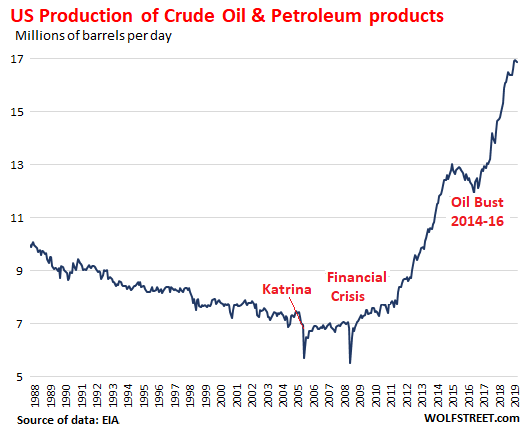 In the process, the US has become the largest crude oil producer in the world, and imports from Saudi Arabia have shriveled to about 450,000 barrels per day. China, Japan, and South Korea are now large customers of Saudi Arabia.

The US has been involved in a lively trade – importing and exporting – with the rest of the world in crude oil and petroleum products such as gasoline. Among the reasons are pricing, demand by refineries in the US and around the world for various grades of crude, and geographical reasons.

California, for example. There is no pipeline connecting the state to the oil producing areas east of the Rockies. Since California’s own production is not nearly enough to meet demand, it has been importing crude oil from Alaska. As Alaskan and Californian production has been shrinking, California increased imports from other countries.  At the same time, California’s refineries are refining imported crude oil into gasoline and are exporting it to other countries, mostly in Latin America. 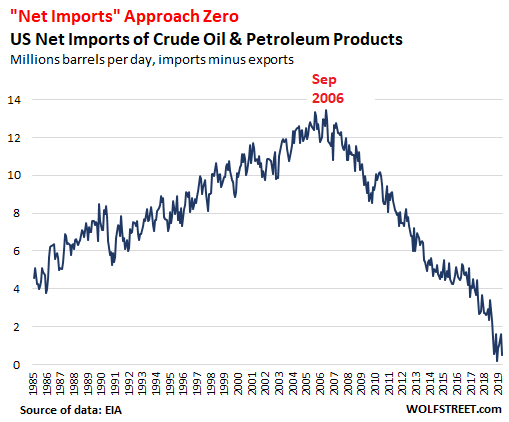 This soaring production in the US is at least in part responsible for the collapse of the price of crude oil since 2014. The word is overproduction.

Shale-oil drillers were heavily incentivized to maximize production, and not worry about negative cashflows and losses – and the industry has been burning large amounts of cash from day one that Wall Street was happy to provide. But recently Wall Street has gotten a little skittish, and credit conditions for shale-oil drillers have tightened. So a rise in the price of oil from the collapsed levels is a godsend for the industry.

Natural gas production in the US has skyrocketed as well, making the US the largest natural gas producer in the world years ago. Last year, the US became a net exporter of natural gas (exporting more than importing). This trend has strengthened in 2019.

The oil-and-gas industry and the industries that support it – manufacturing (specialized vehicles, heavy equipment, etc.), finance, insurance, suppliers of raw materials, the tech sector, and others – combine into a very large field of economic activity around oil and gas production.

A boom in this industry has a powerful impact on the real economy in the US, including in areas that are otherwise not favored by economic development. Workers are highly paid. And they spend much of this money, and it spreads to other sectors.

A higher price of crude oil on a sustained basis translates into higher prices at the pump. But gasoline prices have been crushed by the oil bust, and despite years of inflation overall, the average price of gasoline, all grades combined, as of September 9 at $2.55, is where it had first been in August 2005: 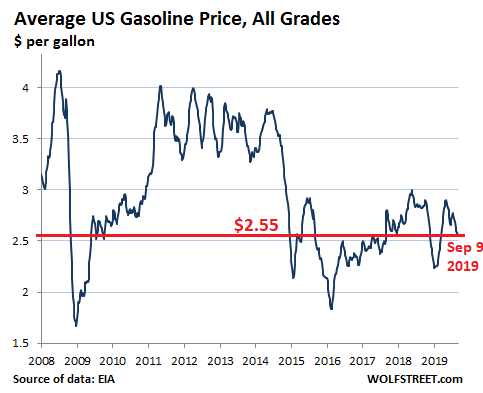 Even if gasoline prices rise, and some consumers are feeling the pain in their budgets, there remains a simple fact: Gasoline sales are also part of the economy and enter into GDP calculations. Any additional dollar spent on gasoline is an increase in GDP. If some consumers curtail spending money on clothing in order to spend more on gasoline, the net effect on the economy is still positive:

Unlike clothing and many other things, gasoline is not imported from China or Bangladesh; it’s a US product, requiring a sophisticated, high-value production chain with highly paid US workers. On the other hand, the value of imports are subtracted from GDP.

In 2007, part of the money that consumers spent on gasoline went to pay for imported crude oil to enrich foreign oil producers at the expense of the US economy. But this is no longer the case. And an enduring surge in the price of oil to $70-plus for WTI will unleash an even more intense production boom that will turn the US more quickly and more sharply into a net exporter of crude oil and petroleum products, which would be a net positive for the US economy, and which would eventually cause the price of oil to re-collapse.

What would the Fed do if economic factors were all it looked at? Read…  “Core” Inflation Rises Most Since Sep 2008, Powered by Services and Now Even the Peculiar Case of Durable Goods