Cross-border, digital labour platforms permit real-time hiring for a range of jobs, from IT programming to graphic design, copywriting and routine clerical tasks. But little is known about working conditions on these platforms or about their employees. This column begins to fill that gap in the scholarship using an ILO survey of 3,500 workers from 75 countries and five major microtask platforms. It finds that even workers who perform valuable labour for successful companies often do so for low wages and without the protections of a regulated employment relationship.

Debates about the gig economy tend to focus on transportation network companies (TNCs) and other locally provided services. Less discussed but of growing importance in the world of work are cross-border, web-based, digital labour platforms.

Web-based digital labour platforms permit the real-time hiring of labour for myriad tasks, from IT programming to graphic design, copywriting or routine clerical tasks. On these platforms, groups of workers (‘the crowd’) living across multiple time zones offer businesses the possibility of completing projects at any time, day or night. These ‘invisible’ human workers are essential for a range of services often portrayed as automated, or ‘artificially intelligent’, from data processing to home security systems and self-driving cars (Newman 2017, Fussell 2019, Gray and Suri 2019). Growth on digital labour platforms has been strong – expanding by nearly one-third between July 2016 and March 20191 – and is predicted to remain so (Corporaal and Lehdonvirta, 2017).  Indeed, researchers and industry practitioners expect to see the demand for this kind of work grow, not shrink, as automation and artificial intelligence advance (Schmidt 2019).

Occupations on web-based, digital labour platforms can be roughly divided into ‘microtasks’ and ‘macrotasks.’ Microtasks are short and often of a clerical nature, such as copywriting, content access, product categorization, verifying and validating data, content moderation (the removal of pornography or violent images before they are uploaded on social media accounts), text or audio transcription, and filling out surveys.  Prices are set by the client or platform without negotiation, and clients pay a fee. ‘Macrotasks’ are longer-term projects that typically require specialized skills, such as IT programming or graphic design.  Most macrotask platforms are designed so that workers set up individual profiles indicating their expertise and rate, with the final price for their work set via a bargaining process with the client.  Clients can pay per project or hourly; if hourly, the platform may facilitate the monitoring of the work through surveillance software. Most macrotask platforms charge the worker a fee, typically ranging from 5% to 20% of the project cost.

Like other digital labour platforms, web-based online platforms typically classify their workers as self-employed, thereby denying them labour protections and employer-provided social security benefits. The terms and conditions of working on the platforms are laid out in the platforms’ ‘terms of service’ documents, which workers must accept in order to begin working. These terms are set unilaterally by the platforms and state how and when crowdworkers will be paid, how their work will be evaluated, and what recourse workers have (or do not have) when things go wrong. Because workers are spread throughout the world, and may not live in the same country where the platform or clients are located, it is not a simple matter for regulators to address working conditions.  Moreover, as workers are classified as independent contractors, they are usually deprived of the right to organize collectively.  Even were they allowed to organise, the geographic dispersion of the workforce would make it difficult.

Who Are the Workers? And What Are Their Working Conditions Like?

To better understand working conditions on digital labour platforms, the International Labour Organization (ILO) undertook a survey of workers on five leading English-language microtask platforms: Amazon Mechanical Turk (AMT), Clickworker, Crowdflower (since renamed Figure Eight), Microworker and Prolific.2 The survey was first posted in 2015 on the AMT and Crowdflower platforms for respondents to fill out, and then re-posted in 2017 on the two original platforms as well as Clickworker, Microworker, and Prolific. The final clean sample included approximately 3500 completed questionnaires.  The survey responses provide information on the socio-demographic characteristics of the workers, their reasons for entering crowdwork, their financial situation, their working conditions, and how the crowdwork experiences of women and men differ.

Survey respondents hailed from 75 countries, with all regions represented (see Figure 1). Crowdwork is largely an urban phenomenon, with four out of five workers residing in an urban or suburban community.

Though the survey only concerned less-skilled microtask work, the workers in our sample were well-educated; more than 80% had pursued post-secondary studies, many in science and technology fields. The crowdworkers’ average age was 33.2 years.

In the Global North, 55% of respondents were men and 45% women. In the Global South, men outnumbered women by a ratio of five to one. Women often took to crowdworking as a means to combine work with care responsibilities; 13% of women responded that they could only work from home, compared with 5% of men.  The primary reason cited by both men and women for performing crowdwork was to ‘complement pay from other jobs’ (32%); the second most important reason was because they ‘prefer to work from home’ (22%). For one out of every three workers, crowdwork was their main source of income (Berg et al. 2018).

Despite the importance of crowdwork as a source of income, earnings were relatively low – particularly given the high education levels of the global workforce. The 2017 ILO survey showed that average hourly earnings ranged between US$2 and US$6.5, with a high proportion of workers earning below the prevailing minimum wage in their jurisdiction, a finding also documented in other studies (Hara et al. 2018, Huws et al. 2017). The low earnings among these workers is due in part to their inability to obtain tasks on a continuous basis.  Workers spent an average of 20 minutes every hour performing unpaid work (looking for work, taking unpaid qualification tests, vetting clients in online worker forums). An overwhelming majority of workers (88%) reported that they would like to do more work, desiring an average of 12 hours more crowdwork per week.

Figure 2 Distribution of hourly paid and unpaid labour among workers by platforms, 2017 (US$) 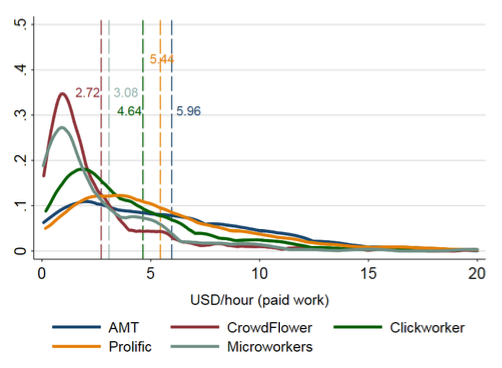 b) Hourly pay (paid and unpaid work) by platform The ILO survey showed that lack of social protection was also a real concern. Social protection coverage was inversely related to the individual’s dependence on crowdwork – workers who are more dependent on crowdwork are also more likely to be unprotected. Individuals for whom crowdwork is the main source of income (i.e. those who do not have another job) have little protection, especially with regard to pensions or retirement plans. Another concern for the workers surveyed was the rejection of their work, which many deemed unfair.  Nearly nine out of ten had had work rejected, for which they were not paid. While some rejections may have been justified—if workers did not follow instructions properly or made mistakes—often the problems lay beyond the worker’s control, from instructions that were unclear to mistakes in the task design, technical errors, or simple dishonesty (McInnis et al. 2016). Rejected work could also affect workers’ rating on the platform and their ability to get more work in an already competitive environment. Often, little or no justification was given for rejections and few options made available for recourse.

Despite performing valuable work for many successful companies, compensation from crowdwork is often lower than minimum wage. Workers must manage unpredictable income streams and work without the standard labour protections of an employment relationship. None of these negative outcomes is inherent to the concept of crowdwork, or to microtask work in particular. On the contrary, it would be possible to reconfigure the terms of microwork to improve conditions for workers. Because work on digital labour platforms is often conducted across borders, new approaches may be needed to ensure decent work.

In the EU, one approach could bring existing legislation – such as the General Data Protection Regulation – to bear on controversial practices, such as uncontestable non-payment. At the international level, in January 2019 the ILO’s Global Commission on the Future of Work called for the “development of an international governance system for digital labour platforms that sets and requires platforms (and their clients) to respect certain minimum rights and protections” (ILO 2019).  Such an international governance system could set minimum standards as well as developing the infrastructure necessary for facilitating payments to social security systems.  It could also establish a representative board to adjudicate disputes between platforms, clients, and workers.

It is hard to imagine a future world of work that doesn’t involve cross-border, digital labour platforms. The time has come to develop approaches that can ensure decent work for all.

Authors’ note: The views expressed are our own and do not necessarily reflect those of the ILO.