This is Naked Capitalism fundraising week. 1528 donors have already invested in our efforts to combat corruption and predatory conduct, particularly in the financial realm. Please join us and participate via our donation page, which shows how to give via check, credit card, debit card, or PayPal. Read about why we’re doing this fundraiser and what we’ve accomplished in the last year, and our current goal, more original reporting..

Yves here. I know I’m showing my age in recoiling at the remarks in this post that show how much educators see the purpose of college being to land a particular type of job, as opposed to create well informed citizens who also have skills that employers can put to use. As for the value of computer science degrees in particular, it’s been true for a long time, and it may still be true, that entry level jobs are scarce because employers send what used to be yeoman’s tasks overseas or use workers on H1-B visas. So one has to wonder why tech squillionaires are teaming up to have US schools create even more coders.

But the main point of the article is important too: individuals need a certain level of math skills to perform at a competent level in many jobs. Giving math credits for computer science may enable too many to skip foundational training.

By Chris Orban, Assistant Professor of Physics, The Ohio State University. Originally published at The Conversation

In 2013, a who’s who of the tech world came together to launch a new nonprofit called Code.org. The purpose of the organization was to get more computer science into schools.

Billionaires like Mark Zuckerberg and Bill Gates donated millions of dollars to the group. According to the organization’s last annual report, Code.org spent more than US$91 million between 2013 and 2018. Of that amount, $6.9 million went to advocate for state legislation across the country. 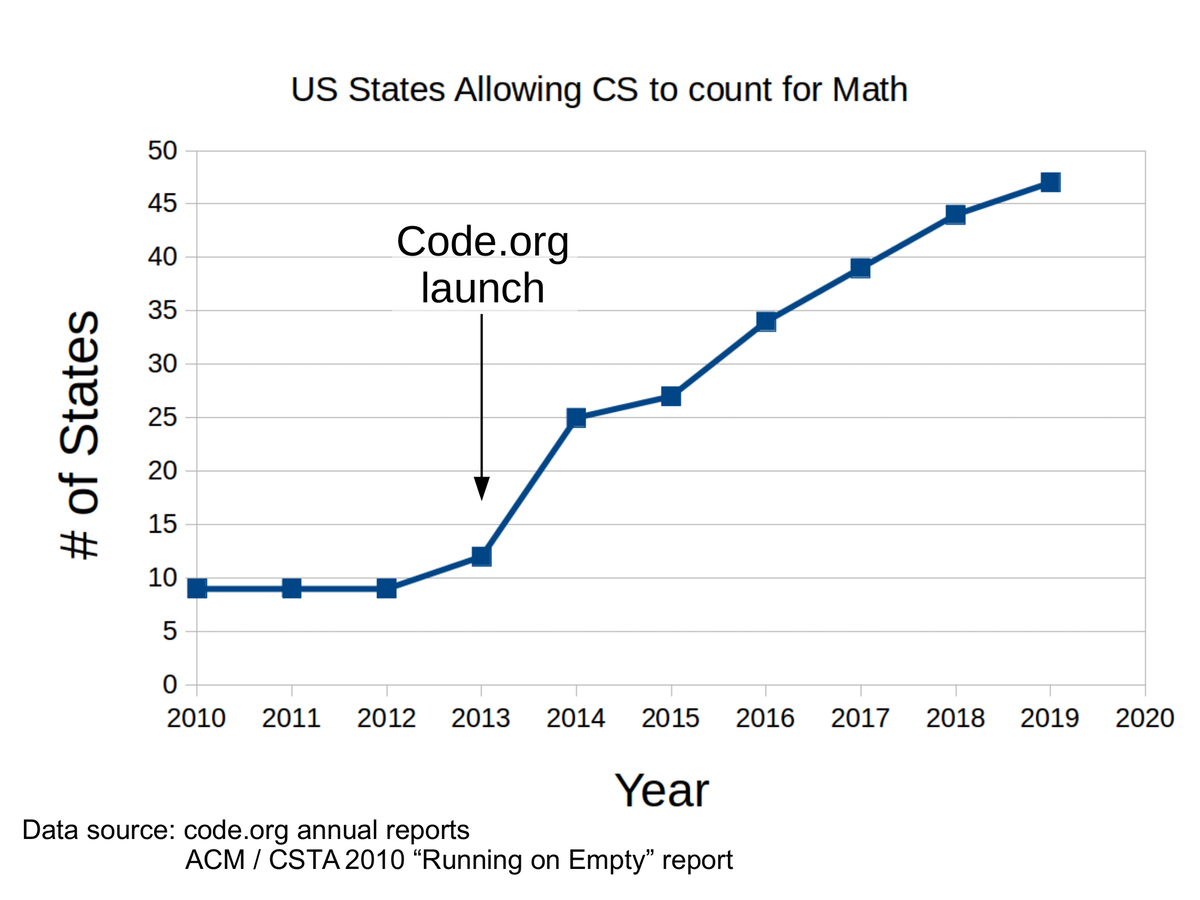 In addition, 29 states passed legislation allowing computer science to count in place of a science course. When computer science begins to count as math or science, it makes sense to ask if these changes are helping America’s students or hurting them.

Is This a Good Idea?

As a computational physicist and education researcher who teaches college freshman introductory physics, I worry that allowing computer science to count as a required math or science course could make students substantially less prepared for college. I searched around for research on this topic and asked several colleagues but came up empty-handed. I also worry that a lack of math and science preparation in high school could artificially narrow the range of options for students who might otherwise have promising STEM careers.

I began working on the STEMcoding Project in 2016 after getting frustrated by how many undergrads and even graduate students came to my office wanting to be mentored on a computational physics research projects despite having no prior experience with programming.

When I consider computer science in schools, I want to know: What kind of computer science, how rigorous is the content, and what ends up being removed to make room for it? Although there are exceptions, most high school computer science curricula that I have seen have been light on math and science.

I worry that students may take computer science just to avoid the more difficult math and science courses they need for college. Computer science could be a way for students to circumvent graduation requirements while adults look the other way.

Others are concerned, too. In response to these trends, the National Council of Teachers of Mathematics called in 2016 and as recently as 2018 for math classes to count as math only when they are “designed explicitly to teach mathematics.”

Computer science can be a practical class that helps prepare students for real middle-class jobs. Florida Governor Ron DeSantis expressed similar ideas when he signed a workforce education bill into law earlier this year that allows computer science to count as math or science. 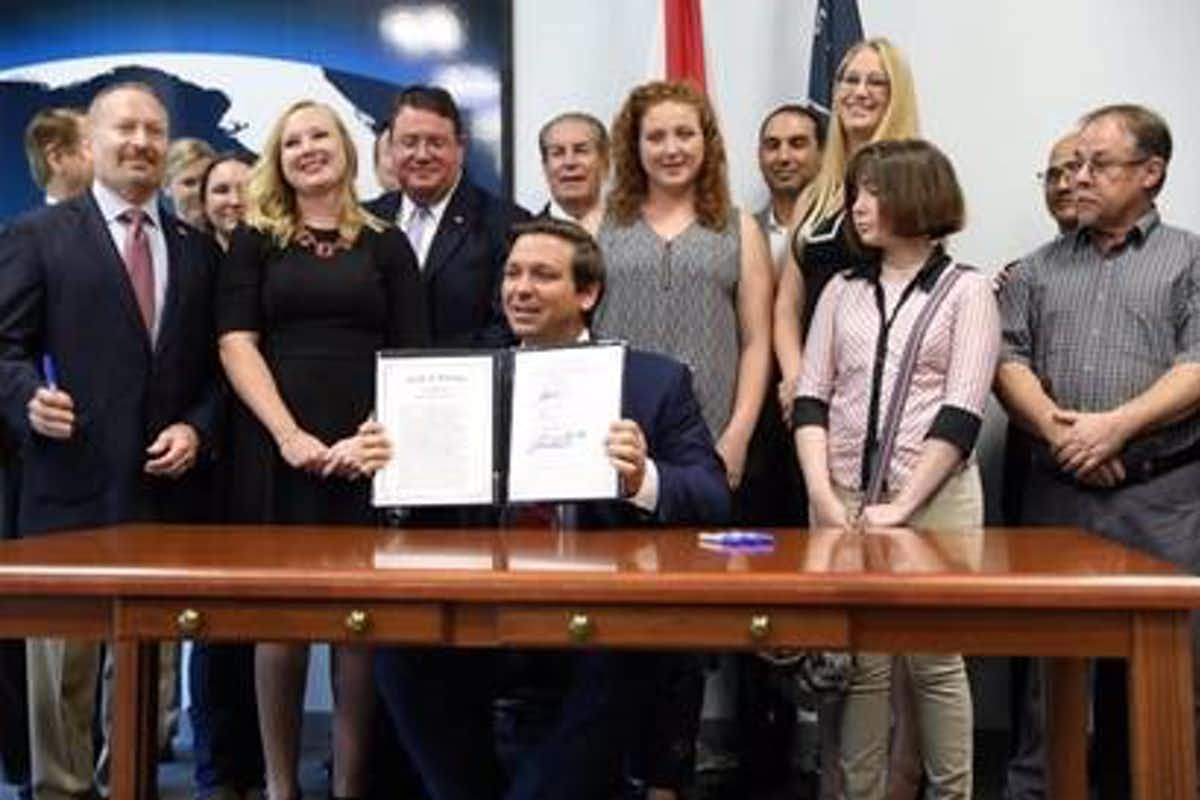 “Other than trying to keep my kids from falling down the stairs in the Governor’s mansion I don’t know how much I deal with physics daily,” the governor said. But he said it’s different when it comes to computer science. “You cannot live in our modern society without dealing with technology or computers in your daily life,” he added.

There are some solid numbers behind this sentiment. Despite a surge in the number of students taking computer science in college, there is still far more demand for computer science and software engineering workers than there is supply.

Perhaps because of this demand the salaries for computer science jobs are estimated to be as much as 40% more than jobs in other fields.

Despite these arguments there are still good reasons to question computer science substitution policies like the one deSantis signed. Being a modern electrician, for example, requires some understanding of algebra and trigonometry.

Even for those who plan to study computer science, taking Algebra 2 and above is highly recommended. Algebra 2 and other advanced math courses are also important for engineering.

Some studies estimate that a remarkable 40% of college freshmen in the U.S. require remedial math courses. That portion could go up if fewer students are taking a traditional math sequence in high school.

Taking remedial math courses like Algebra 2 in college requires students to spend more time and money than they would if they just took and passed four years of math in high school. According to one study, only about half of all students who take remedial math ever complete it. So skipping Algebra 2 in high school could end up stopping many students from graduating from college at all.

A Matter of Choice

Perhaps in weighing these concerns, of the 47 states that do allow computer science to count in place of math, 13 leave it to individual districts to decide whether to let students exercise that option. The list of 13 includes tech savvy states like New York and California.

In a majority of U.S. states, students and families now have a serious choice to make. Students can take a nontraditional route and replace courses like Algebra 2 and physics with computer science, taking their chances that this won’t come back to bite them later. Or they can stick with a more traditional curriculum, with its traditional advantages and disadvantages.

We especially need to understand how this flexibility affects women and students from underrepresented groups. Computer science advocates have created a kind of national experiment. The next few years will show if this was a good idea, but only if we’re looking at more than just the numbers of students taking computer science.