Every word a true one

Almost the very definition of corruption is trading money for favors while serving the public interest in public office. Almost, but not quite. There are other definitions, and Zephyr Teachout’s “self-serving use of public power for private ends” is still the best. But money-for-gifts-and-services is the easiest to identify and despise.

For those not permanently married to the Democratic or Republican parties as tribal identities, what’s to choose between the legalized corruption of Joe Biden and his family and the international-mob–infested corruption of Donald Trump and his? Not much, except perhaps in degree.

Do we really need evidence of a quid pro quo, a smoking gun, to see a body on the floor, its money in someone else’s hands, and a room where two walked in but only one walked out, to know a bribe occurred? If you can convict a person of murder on strong circumstantial evidence — and you can — you can convict (in your mind) for bribery the same way.

The DNC Responds to the Sanders No-Corporate-Money DNC Pledge

With that in mind — and remembering Bernie Sanders’ recent pledge to forbid corporate funding of the DNC and Democratic Party convention — let’s look at what the pre-Sanders DNC is up to:

Party representatives are meeting with lobbyists about funding the $70 million event as candidates swear off corporate-connected dollars.

Two top operatives planning the Democratic Party’s 2020 convention in Milwaukee went to K Street last week to pitch lobbyists on their plans for the $70 million event.

Against the backdrop of the Democratic primary, it was an awkward pairing — representatives for special interests meeting with top Democrats while the party’s leading presidential candidates reject corporate PAC and lobbyist cash. But Democratic National Committee officials explained during the meeting how corporations can help foot the bill for the convention, regardless of who the nominee is, addressing some lobbyists’ worries that a crusading left-wing nominee like Bernie Sanders or Elizabeth Warren could try to reject corporate money, embarrassing convention sponsors.

Two things to note about that passage: First, “representatives for special interests” is fog-talk for corporate bribe-givers. Amnesty International is also a “special interest,” but no one considers them a nest of money-laundering bribery agents.

Second, did you see the inclusion of Elizabeth Warren along with Bernie Sanders in the last sentence? To my knowledge, the anti-corruption Warren hasn’t yet followed Sanders lead in forbidding corporate gifts to the DNC, its convention and her inauguration if she’s the nominee.

Here’s just part of what Sanders’ Issue page promises regarding corporate funding of his party if he’s the nominee and president:

As the Democratic nominee, Bernie will:

• Ban corporate contributions to the Democratic Party Convention and all related committees.

As president, Bernie will:

• Ban all corporate donations for inaugural events and cap individual donations to $500.

• End the influence of corporations at the DNC.

• Institute a lifetime lobbying ban for former members of Congress and senior staffers.

Again, this is just some of what he’s promised on this issue. (He’s also going to overturn Buckley v. Valeo, the Supreme Court’s original sin when defining money as speech, but that’s a subject for another day.)

Has anyone seen a response to this from Warren? I hope we get one, and I hope it’s as strong — I also hope she’s asked if she agrees with Sanders’ position during one of the debates — but given her “play nice with the Party” stances, I’m not overly optimistic. Here’s how the New York Times described her message to Party leaders: “While her liberal agenda may be further left than some in the Democratic establishment would prefer, she is a team player who is seeking to lead the party — not stage a hostile takeover of it.”

Either that’s inaccurate — a real possibility, since the Times has a horse in this race — or Warren is unlikely to be as full-throated about strangling the Party-wants-corporate-money monster in its bed, if she speaks about it at all.

Will the DNC Return Corporate Money If Sanders Is the Nominee? No.

So the Party is going full bore into K Street offices, selling what they can offer and hoping K Street will offer what they want — $70 million, for now.

And, at least according to Politico in the article cited above, the DNC won’t give back any what they manage to harvest from corporate sources if Sanders is the nominee: “The DNC doesn’t plan to return any corporate money that is donated to the convention regardless of the nominee, convention CEO Joe Solmonese told POLITICO.” 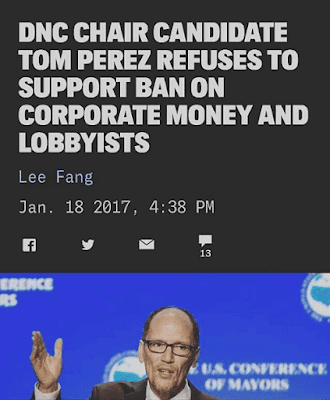 There’s an interesting little war setting up between Sanders and the Party. No wonder no one but us “small people” want Sanders to win. It’s definitely a club, the DNC is in it, and we’re not even invited to hold their coats.