This is Naked Capitalism fundraising week. 1326 donors have already invested in our efforts to combat corruption and predatory conduct, particularly in the financial realm. Please join us and participate via our donation page, which shows how to give via check, credit card, debit card, or PayPal. Read about why we’re doing this fundraiser and what we’ve accomplished in the last year, and our current goal, expanding our reach.

At first blush, the suit filed in Dallas by the Southwest Airlines Pilots Association (SwAPA) against Boeing may seem like a family feud. SWAPA is seeking an estimated $115 million for lost pilots’ pay as a result of the grounding of the 34 Boeing 737 Max planes that Southwest owns and the additional 20 that Southwest had planned to add to its fleet by year end 2019. Recall that Southwest was the largest buyer of the 737 Max, followed by American Airlines. However, the damning accusations made by the pilots’ union, meaning, erm, pilots, is likely to cause Boeing not just more public relations headaches, but will also give grist to suits by crash victims.

However, one reason that the Max is a sore point with the union was that it was a key leverage point in 2016 contract negotiations: 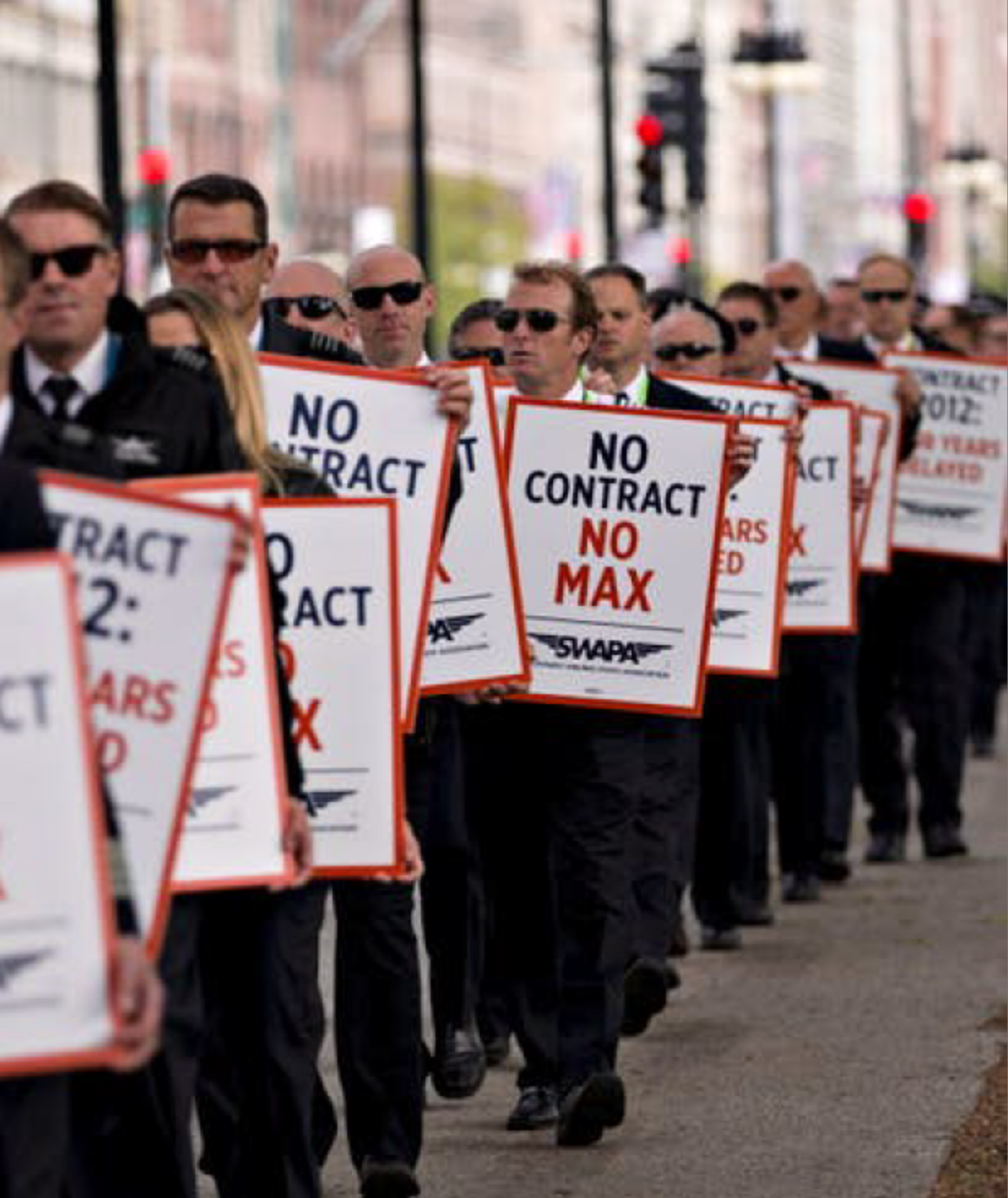 And Boeing’s assurances that the 737 Max was for all practical purposes just a newer 737 factored into the pilots’ bargaining stance. Accordingly, one of the causes of action is tortious interference, that Boeing interfered in the contract negotiations to the benefit of Southwest. The filing describes at length how Boeing and Southwest were highly motivated not to have the contract dispute drag on and set back the launch of the 737 Max at Southwest, its showcase buyer. The big point that the suit makes is the plane was unsafe and the pilots never would have agreed to fly it had they known what they know now.

We’ve embedded the compliant at the end of the post. It’s colorful and does a fine job of recapping the sorry history of the development of the airplane. It has damning passages like:

Boeing concealed the fact that the 737 MAX aircraft was not airworthy because, inter alia, it incorporated a single-point failure condition—a software/flight control logic called the Maneuvering Characteristics Augmentation System (“MCAS”)—that,if fed erroneous data from a single angle-of-attack sensor, would command the aircraft nose-down and into an unrecoverable dive without pilot input or knowledge.

The lawsuit also aggressively contests Boeing’s spin that competent pilots could have prevented the Lion Air and Ethiopian Air crashes:

Had SWAPA known the truth about the 737 MAX aircraft in 2016, it never would have approved the inclusion of the 737 MAX aircraft as a term in its CBA [collective bargaining agreement], and agreed to operate the aircraft for Southwest. Worse still, had SWAPA known the truth about the 737 MAX aircraft, it would have demanded that Boeing rectify the aircraft’s fatal flaws before agreeing to include the aircraft in its CBA, and to provide its pilots, and all pilots, with the necessary information and training needed to respond to the circumstances that the Lion Air Flight 610 and Ethiopian Airlines Flight 302 pilots encountered nearly three years later.

As SWAPA President Jon Weaks, publicly stated, SWAPA pilots “were kept in the dark” by Boeing.

Boeing did not tell SWAPA pilots that MCAS existed and there was no description or mention of MCAS in the Boeing Flight Crew Operations Manual.

There was therefore no way for commercial airline pilots, including SWAPA pilots, to know that MCAS would work in the background to override pilot inputs.

There was no way for them to know that MCAS drew on only one of two angle of attack sensors on the aircraft.

And there was no way for them to know of the terrifying consequences that would follow from a malfunction.

When asked why Boeing did not alert pilots to the existence of the MCAS, Boeing responded that the company decided against disclosing more details due to concerns about “inundate[ing] average pilots with too much information—and significantly more technical data—than [they] needed or could realistically digest.”

SWAPA’s pilots, like their counterparts all over the world, were set up for failure

The filing has a detailed explanation of why the addition of heavier, bigger LEAP1-B engines to the 737 airframe made the plane less stable, changed how it handled, and increased the risk of catastrophic stall. It also describes at length how Boeing ignored warning signs during the design and development process, and misrepresented the 737 Max as essentially the same as older 737s to the FAA, potential buyers, and pilots. It also has juicy bits presented in earlier media accounts but bear repeating, like:

By March 2016, Boeing settled on a revision of the MCAS flight control logic.

However, Boeing chose to omit key safeguards that had previously been included in earlier iterations of MCAS used on the Boeing KC-46A Pegasus, a military tanker derivative of the Boeing 767 aircraft.

The engineers who created MCAS for the military tanker designed the system to rely on inputs from multiple sensors and with limited power to move the tanker’s nose. These deliberate checks sought to ensure that the system could not act erroneously or cause a pilot to lose control. Those familiar with the tanker’s design explained that these checks were incorporated because “[y]ou don’t want the solution to be worse than the initial problem.”

The 737 MAX version of MCAS abandoned the safeguards previously relied upon. As discussed below, the 737 MAX MCAS had greater control authority than its predecessor, activated repeatedly upon activation, and relied on input from just one of the plane’s two sensors that measure the angle of the plane’s nose.

In other words, Boeing can’t credibly say that it didn’t know better.

Here is one of the sections describing Boeing’s cover-ups:

Yet Boeing’s website, press releases, annual reports, public statements and statements to operators and customers, submissions to the FAA and other civil aviation authorities, and 737 MAX flight manuals made no mention of the increased stall hazard or MCAS itself.

In fact, Boeing 737 Chief Technical Pilot, Mark Forkner asked the FAA to delete any mention of MCAS from the pilot manual so as to further hide its existence from the public and pilots.

We urge you to read the complaint in full, since it contains juicy insider details, like the significance of Southwest being Boeing’s 737 Max “launch partner” and what that entailed in practice, plus recounting dates and names of Boeing personnel who met with SWAPA pilots and made misrepresentations about the aircraft.

If you are time-pressed, the best MSM account is from the Seattle Times, In scathing lawsuit, Southwest pilots’ union says Boeing 737 MAX was unsafe

Even though Southwest Airlines is negotiating a settlement with Boeing over losses resulting from the grounding of the 737 Max and the airline has promised to compensate the pilots, the pilots’ union at a minimum apparently feels the need to put the heat on Boeing directly. After all, the union could withdraw the complaint if Southwest were to offer satisfactory compensation for the pilots’ lost income. And pilots have incentives not to raise safety concerns about the planes they fly. Don’t want to spook the horses, after all.

But Southwest pilots are not only the ones most harmed by Boeing’s debacle but they are arguably less exposed to the downside of bad press about the 737 Max. It’s business fliers who are most sensitive to the risks of the 737 Max, due to seeing the story regularly covered in the business press plus due to often being road warriors. Even though corporate customers account for only 12% of airline customers, they represent an estimated 75% of profits.

Southwest customers don’t pay up for front of the bus seats. And many of them presumably value the combination of cheap travel, point to point routes between cities underserved by the majors, and close-in airports, which cut travel times. In other words, that combination of features will make it hard for business travelers who use Southwest regularly to give the airline up, even if the 737 Max gives them the willies. By contrast, premium seat passengers on American or United might find it not all that costly, in terms of convenience and ticket cost (if they are budget sensitive), to fly 737-Max-free Delta until those passengers regain confidence in the grounded plane.

Note that American Airlines’ pilot union, when asked about the Southwest claim, said that it also believes its pilots deserve to be compensated for lost flying time, but they plan to obtain it through American Airlines.

If Boeing were smart, it would settle this suit quickly, but so far, Boeing has relied on bluster and denial. So your guess is as good as mine as to how long the legal arm-wrestling goes on.

Update 5:30 AM EDT: One important point that I neglected to include is that the filing also recounts, in gory detail, how Boeing went into “Blame the pilots” mode after the Lion Air crash, insisting the cause was pilot error and would therefore not happen again. Boeing made that claim on a call to all operators, including SWAPA, and then three days later in a meeting with SWAPA.

However, Boeing’s actions were inconsistent with this claim. From the filing:

Then, on November 7, 2018, the FAA issued an “Emergency Airworthiness Directive (AD) 2018-23-51,” warning that an unsafe condition likely could exist or develop on 737 MAX aircraft.

Relying on Boeing’s description of the problem, the AD directed that in the event of un-commanded nose-down stabilizer trim such as what happened during the Lion Air crash, the flight crew should comply with the Runaway Stabilizer procedure in the Operating Procedures of the 737 MAX manual.

But the AD did not provide a complete description of MCAS or the problem in 737 MAX aircraft that led to the Lion Air crash, and would lead to another crash and the 737 MAX’s grounding just months later.

An MCAS failure is not like a runaway stabilizer. A runaway stabilizer has continuous un-commanded movement of the tail, whereas MCAS is not continuous and pilots (theoretically) can counter the nose-down movement, after which MCAS would move the aircraft tail down again.

Moreover, unlike runaway stabilizer, MCAS disables the control column response that 737 pilots have grown accustomed to and relied upon in earlier generations of 737 aircraft.

Even after the Lion Air crash, Boeing’s description of MCAS was still insufficient to put correct its lack of disclosure as demonstrated by a second MCAS-caused crash.

We hoisted this detail because insiders were spouting in our comments section, presumably based on Boeing’s patter, that the Lion Air pilots were clearly incompetent, had they only executed the well-known “runaway stabilizer,” all would have been fine. Needless to say, this assertion has been shown to be incorrect.