Yves here. To give you a bit of break rom the loud warble coming from far too many news outlets, here’s a point of entry into a classic debate about fairness, or more specifically, equality versus equity.

In case you missed it, there’s been a war on equity in the form of the law and economics movement. From ECONNED:

The third avenue for promoting and institutionalizing the “free market” ideology was inculcating judges. It was one of the most far-reaching actions the radical right wing could take. Precedents are powerful, and the bench turns over slowly. Success here would make the “free markets” revolution difficult to reverse.

While conservative scholars like Richard Posner and Richard Epstein at the University of Chicago trained some of the initial right-leaning jurists, attorney Henry Manne gave the effort far greater reach. Manne established his “law and economics” courses for judges, which grew into the Law and Economics Center, which in 1980 moved from the University of Miami to Emory in Atlanta and eventually to George Mason University.

Manne had gotten the backing of over 200 conservative sponsors, including some known for extreme right-wing views, such as the Adolph Coors Company, plus many of the large U.S. corporations that were also funding the deregulation.

Manne is often depicted as an entrepreneur in the realm of ideas. He took note of the fact that, at the time, the University of Chicago had one of the few law schools that solicited funding from large corporations. Manne sought to create a new law school, not along conventional brick-and-mortar lines (his efforts here failed), but as a network. He set out to become a wholesaler, teaching law professors and judges. However, although Manne presented his courses as teaching economics from a legal perspective, they had a strong ideological bias:

The center is directed by Henry Manne, a corporate lawyer who has undertaken to demolish what he calls “the myth of corporate responsibility.” “Every time I hear a businessman acknowledge public interest in what they do,” Manne warns, “they invite political control over their activities.” At Manne’s center in Miami, interested judges learn how to write decisions against such outside political control couched in the new norms of market efficiency.

Manne approached his effort not simply as education, but as a political movement. He would not accept law professors into his courses unless at least two came from a single school, so that they could support each other and push for others from the law and economics school of thought to be hired.

The program expanded to include seminars for judges, training in legal issues for economists, and an economics institute for Congressional aides. A 1979 Fortune article on the program noted that the instructors “almost to a man” were from the “free market” school of economics. Through 1980, 137 federal district and circuit court judges had finished the basic program and 56 had taken additional “advanced” one-week courses.

It is hard to overstate the change this campaign produced, namely, a major shift in jurisprudence. As Steven Teles of the University of Maryland noted:

In the beginning, the law and economics (with the partial exception of its application to antitrust) was so far out of the legal academic mainstream as to be reasonably characterized as “off the wall.” . . . Moving law and economics’ status from “off the wall” to “controversial but respectable” required a combination of celebrity and organizational entrepreneurship. . . . Mannes’ programs for federal judges helped erase law and economics’ stigma, since if judges— the symbol of legal professional respectability—took the ideas seriously, they could not be crazy and irresponsible.

Now why was law and economics vantage seen as “off the wall?” Previously, as noted above, economic thinking had been limited to antitrust, which inherently involves economic concepts (various ways to measure the power of large companies in a market). So extending economic concepts further was at least novel, and novel could be tantamount to “off the wall” in some circles. But with hindsight, equally strong words like “radical,” “activist,” and “revolutionary” would apply.

For instance, a notion that predates the legal practice is equity, that is, fairness. The law in its various forms including legislative, constitutional, private (i.e., contract), judicial, and administrative, is supposed to operate within broad, inherited concepts of equity. Another fundamental premise is the importance of “due process,” meaning adherence to procedures set by the state. By contrast, the “free markets” ideology focuses on efficiency and seeks aggressively to minimize the role of government. The two sets of assumptions are diametrically opposed.

By Peter Dorman, professor of economics at The Evergreen State College. Originally published at Econospeak 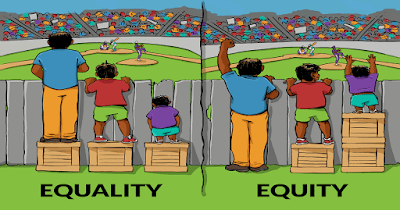 Benjamin Studebaker (hat tip Naked Capitalism) doesn’t like it at all: “I hate it so much.”  But his complaints, about the way the graphic elides classic debates in political theory, strike me as being too redolent of grad school obsessions.  The graphic is not trying to advance one academic doctrine over another; it just makes a simple case for compensatory policy.  I agree in a general way with this perspective.

Consider the Americans with Disabilities Act of 1990, which mandates special facilities in public buildings to accommodate people in wheelchairs or facing other mobility challenges.  This is unequal treatment: extra money is spent to install ramps that only a few will use, rather than for amenities for everyone.  But it’s a great idea!  Yes, compensation is concentrated on a minority, but it aims to allow everyone to participate in public activities, and in doing this it embodies a spirit of solidarity that ought to embrace all of us.  By making a simple, intuitive case for focused compensation, the graphic captures the spirit behind the ADA and many other policies that take account of inequalities that would otherwise leave some members of the community excluded and oppressed.

Unfortunately, however, there are serious limitations to the graphic; above all, it embodies assumptions that beg most of the questions people ask about compensatory programs.  Some are challenges from conservatives of a more individualistic bent, others might be asked by friendly critics on the left, but all are worthy of being taken seriously.

1. Watching the game over the fence is binary: either you can see it or you can’t.  In the real world, however, most activites are matters of degree.  You can learn more or less of a particular subject in school, have a better or worse chance of getting the job you want, live in a bigger or smaller house or apartment.  How much compensation is enough?  At what point do we decide that the gains from ex post equity are not large enough to justify the other costs of the program, not only monetary but possible conflicts with other social objectives?  Every teacher who has thought about how much extra attention to give those students who come to the classroom with extra needs has faced this problem.

2. Watching the game is passive, an act of pure consumption.  Things get more complex when inequalities involve activities that produce goods of value to others.  For instance, how would the graphic address compensatory programs for the baseball players?  Yes, a player from an underserved, overlooked community should get an extra chance to show they should be on the team.  But should the criteria for who makes the team be relaxed?  How and how much?  In case you haven’t noticed, this gets to the core of debates over affirmative action.  Again, I am in favor of the principle of taking extra steps to compensate for pre-existing inequalities, but the graphic offers no guidance in figuring out how far to go in that direction.

3. Height is a largely inherited condition, but what about differences in opportunity that are at least partly the result of the choices we make ourselves?  This is red meat to conservatives, who denounce affirmative action and other compensatory policies on the grounds that they undermine the incentive to try hard and do one’s best.  I think this position is too extreme, since inherited and environmental conditions are obviously crucial in many contexts, but it would also be a mistake to say that individual choices play no role at all.  Again we are facing questions of degree, and the graphic, with it’s clear intimation that inequality is inborn and ineluctable, doesn’t help.

4. The inequality depicted in the graphic is height, which is easily and uncontroversially measured.  Most social inequalities are anything but.  Student A went to a high school with a library; student B’s high school didn’t have one.  That’s a meaningful inequality, and if an opportunity can be awarded to only one of them, like entrance into a selective college program, it ought to be considered.  But how big an effect should we attribute to it?  Damned if I know.

5. There is no real scarcity facing the three game-watchers in the graphics.  There are enough boxes to allow everyone to get a good view and enough fence space for everyone to share.  In the real world neither tends to be true.  Resources that can be devoted to compensatory programs are limited, especially on a global scale, which, if you’re really an egalitarian, is how you should think about these things.  Even locally, the money often runs short.  The college I used to teach at could be criticized for not doing enough for students from low income and rural backgrounds with weak K-12 systems (I certainly did), but even with the best of intentions the money was not there.  Of course, where the goods to be distributed are competitive, like slots in a school or job openings at a company, the problem is that there’s not enough fence space to go around.  Yes, we should take action to provide more opportunities and reduce the competitive scarcity.  No, this won’t make the scarcity go away completely.

6. The graphic shows us three individuals and asks us to visually compare their heights.  America has a population of over 320 million, and even “small” communities can have a cast of thousands.  Surely we are not expected to make individual calculations for every person-by-person comparison.  No, those using the graphic usually have in mind group comparisons—differences requiring compensatory interventions according to race, class, gender, ability status, etc.  But while that makes things easier by reducing the number of comparisons, it makes everything else much harder to figure out: How do we measure group advantages and disadvantages?  How do we account for intersections?  Are they additive, multiplicative or something else?  Do all members of the group get assigned the same advantage/disadvantage rankings?  If not, on what criteria?  These are tremendously difficult questions.  I am not suggesting that they force us to abandon an egalitarian commitment to substantive, ex post equality—quite the contrary, in fact.  We do have to face them if we want to reduce the inequality in this world.  My point here is that, by depicting just these three fans watching a baseball game over a fence, one tall, one medium, one short, the graphic is a dishonest guide to navigating actual situations.

My bottom line is that, while I agree with the spirit of the graphic that policies, whether at a single office, a large institution or an entire country, should take account of the inequalities people face in real life and try to compensate for them, how and how far to go is difficult to resolve.  Achieving ex post equality is complicated in the face of so many factors that affect our chances in life, and on top of this, equality is only one of many values we ought to respect.  The real world politics of affirmative action, targeted (as opposed to universal) benefit programs and the like reside in these complexities.  The equity graphic conveys the initial insight, but the assumptions packed into its story make it harder rather than easier to think through the controversies that bedevil equity politics.