This is Naked Capitalism fundraising week. 1084 donors have already invested in our efforts to combat corruption and predatory conduct, particularly in the financial realm. Please join us and participate via our donation page, which shows how to give via check, credit card, debit card, or PayPal. Read about why we’re doing this fundraiser and what we’ve accomplished in the last year, and our current goal, burnout prevention.

Yves here. Malcolm Gladwell is very much a mixed bag, but an important 2006 New Yorker article of his, Million Dollar Murray, bears on the issues discussed in the post below. Key section:

[Reno police officers] O’Bryan and Johns called someone they knew at an ambulance service and then contacted the local hospitals. “We came up with three names that were some of our chronic inebriates in the downtown area, that got arrested the most often,” O’Bryan said. “We tracked those three individuals through just one of our two hospitals. One of the guys had been in jail previously, so he’d only been on the streets for six months. In those six months, he had accumulated a bill of a hundred thousand dollars—and that’s at the smaller of the two hospitals near downtown Reno. It’s pretty reasonable to assume that the other hospital had an even larger bill. Another individual came from Portland and had been in Reno for three months. In those three months, he had accumulated a bill for sixty-five thousand dollars. The third individual actually had some periods of being sober, and had accumulated a bill of fifty thousand.” The first of those people was Murray Barr, and Johns and O’Bryan realized that if you totted up all his hospital bills for the ten years that he had been on the streets—as well as substance-abuse-treatment costs, doctors’ fees, and other expenses—Murray Barr probably ran up a medical bill as large as anyone in the state of Nevada.

“It cost us one million dollars not to do something about Murray,” O’Bryan said.

By Markian Hawryluk, the senior Colorado correspondent for KHN, based in Denver, who previously reported for the Houston Chronicle, American Medical News and, most recently, The (Bend, Ore.) Bulletin. Originally published at Kaiser Health News

One patient at Denver Health, the city’s largest safety net hospital, occupied a bed for more than four years — a hospital record of 1,558 days.

Another admitted for a hard-to-treat bacterial infection needed eight weeks of at-home IV antibiotics, but had no home.

A third, with dementia, came to the hospital after being released from the Denver County Jail. His family refused to take him back.

In the first half of this year alone, the hospital treated more than 100 long-term patients. All had a medical issue that led to their initial hospitalization. But none of the patients had a medical reason for remaining in the hospital for most of their stay.

Legally and morally, hospitals cannot discharge patients if they have no safe place to go. So patients who are homeless, frail or live alone, or have unstable housing, can occupy hospital beds for weeks or months — long after their acute medical problem is resolved. For hospitals, it means losing money because a patient lingering in a bed without medical problems doesn’t generate much, if any, income. Meanwhile, acutely ill patients may wait days in the ER to be moved to a floor because a hospital’s beds are full.

“Those people are, for lack of a better term, stranded in our hospital,” said Dr. Sarah Stella, a Denver Health physician.

To address the problem, hospitals from Baltimore to St. Louis to Sacramento, Calif., are exploring ways to help patients find a home. With recent federal policy changes that encourage hospitals to allocate charity dollars for housing, many hospitals realize it’s cheaper to provide a month of housing than to keep patients for a single night. 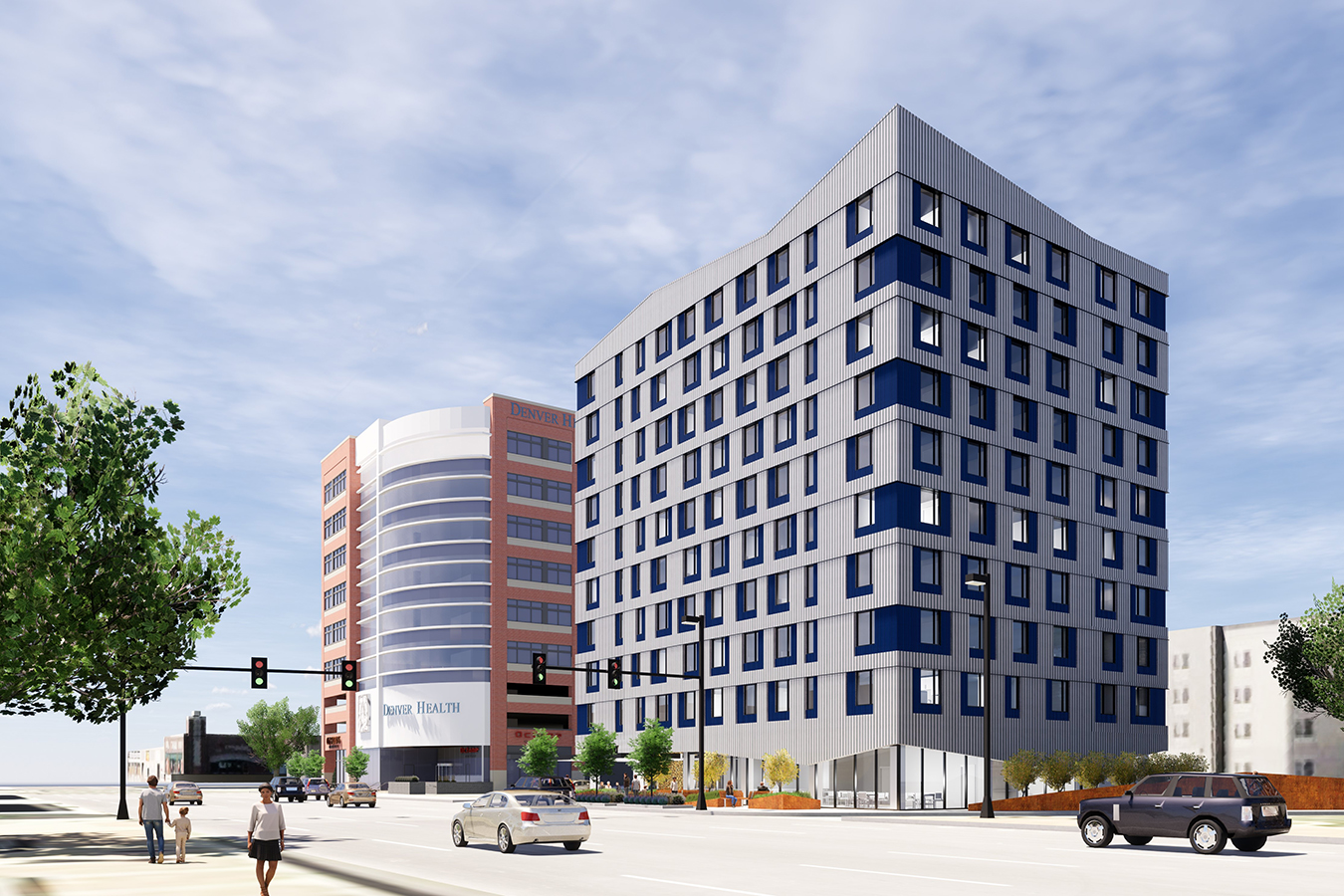 An architectural rendering of Denver Housing Authority’s renovation of the 10-story building once used as office space on Denver Health’s campus.(COURTESY OF THE DENVER HOUSING AUTHORITY)

Hospital executives find the calculus works even if they have to build affordable housing units themselves. It’s why Denver Health is partnering with the Denver Housing Authority to repurpose a mothballed building on the hospital campus into affordable senior housing, including about 15 apartments designated to help homeless patients transition out of the hospital.

“This is an experiment of sorts,” said Peg Burnette, the hospital’s chief financial officer. “We might be able to help better their lives, as well as help the financials of the hospital and help free up capacity for the patients that need to come to see us for acute care.”

Spending To Save Money

Denver Health once used the shuttered 10-story building for office space but opted to sell it to the housing authority and grant a 99-year lease on the land for a minimal fee.

“It really lowers the construction costs for us,” said Ismael Guerrero, Denver Housing Authority’s executive director. “It was a great opportunity to build additional housing in a location that’s obviously close to the hospital, close to public transit, near the city center.”

Once the renovation is complete in late 2021, the housing group will hire a coordinator to assist tenants with housing-related issues, including helping those in the transitional units find permanent housing. The hospital will provide a case manager to help with their physical and behavioral health needs, preparing them for life on their own. Denver Health expects most patients will be able to move on from the transitional units within 90 days.

The hospital will pay for the housing portion itself. That will still be far cheaper than what the hospital currently spends.

It costs Denver Health $2,700 a night to keep someone in the hospital. Patients who are prime candidates for the transitional units stay on average 73 days, for a total cost to the hospital of nearly $200,000. The hospital estimates it would cost a fraction of that, about $10,000, to house a patient for a year instead.

“The hospital really is like the most expensive form of housing,” Stella said. 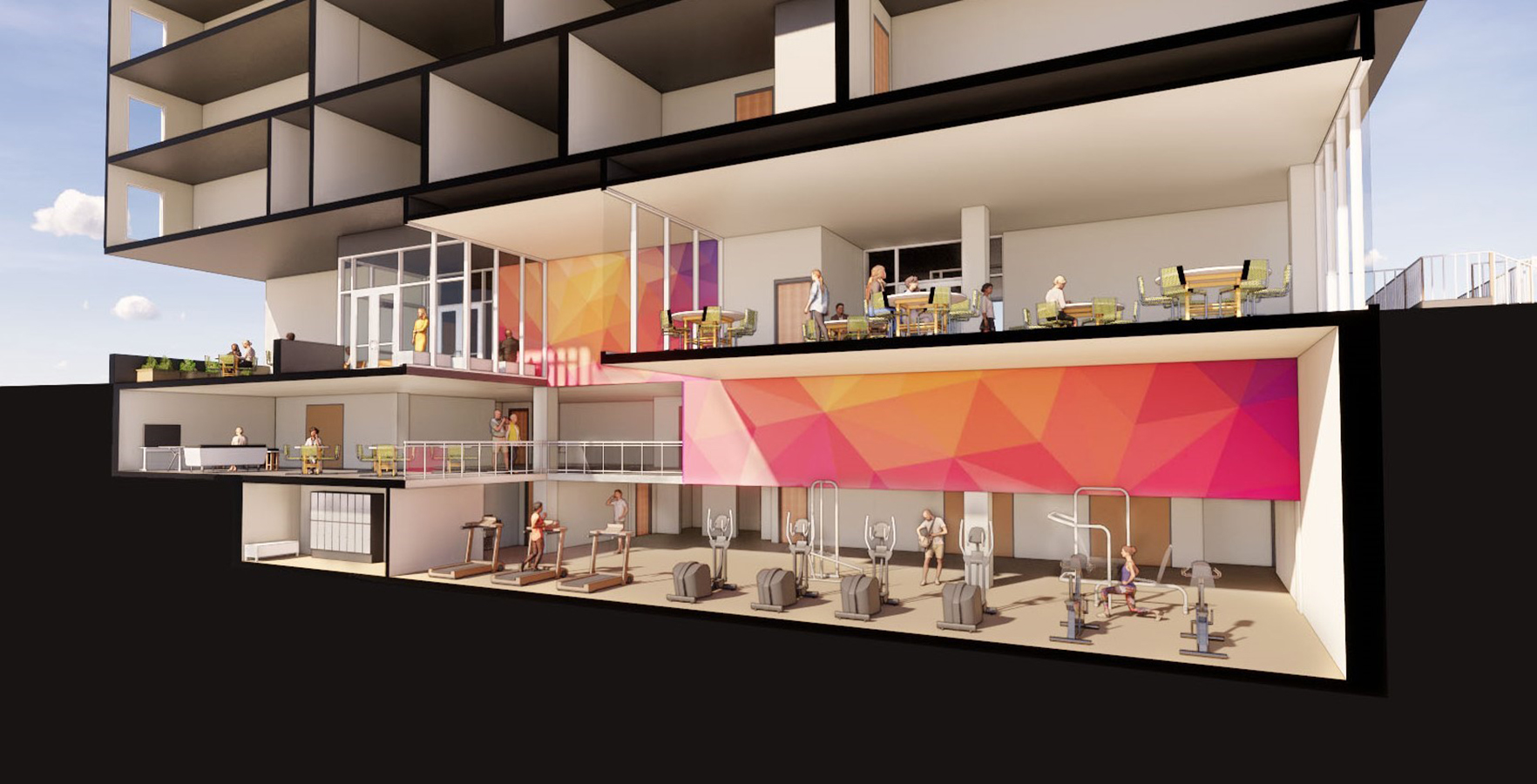 After its targeted late 2021 completion, the building will be used for affordable senior housing, including about 15 apartments designated to help homeless patients transition out of the hospital. (COURTESY OF THE DENVER HOUSING AUTHORITY)

A recent report from the Urban Institute found that while most hospital officials are well aware of how poor housing affects a patient’s recovery, they were stymied about how to address the issue.

“It’s on the radar of almost all hospitals,” said Kathryn Reynolds, who co-authored the report. “But it seemed like actually making investments in housing, providing some type of financing or an investment in land or something that has a good amount of value seems to be less widespread.”

The report found housing investment has been more likely among hospitals with their own health plans or other types of arrangements in which they were receiving a fixed amount of money to care for a group of patients. Getting patients into housing could lower their costs and increase their operating margins. Others, particularly religiously affiliated and children’s hospitals, sought housing solutions as part of their charitable mission.

Reynolds said the trend is due in part to the Affordable Care Act, which requires hospitals to perform a community needs assessment to help guide their charitable efforts. That prompted more hospitals to consider the social needs of their patients and pushed housing concerns up the list. Additionally, the Internal Revenue Service clarified in 2015 that hospitals could claim housing investments as charitable spending required under their tax-free status. And provisions included in the 2017 tax cut bill provided significant tax savings for investors in newly designated opportunity zones, increasing their interest in affordable housing projects.

Some hospitals, she said, may use their cash reserves to invest in housing projects that generate a lower return than other investment options because it furthers their mission, not just their profits.

In other cases, hospital systems play a facilitator role — using their access to cheap credit or serving as an anchor tenant in a larger development — to help get a project off the ground.

“Housing is not their business,” Guerrero said. “It’s not an easy space to get into if you don’t have the experience, if you don’t have a real estate development team in-house to understand how to put these deals together.”

In the southwestern corner of Colorado, Centura Health’s Mercy Regional Medical Center has partnered with Housing Solutions for the Southwest to prioritize housing vouchers for frequent users of the emergency room.

Under a program funded by the Catholic Health Initiatives, Mercy hired a social worker and a case manager to review records of frequent emergency room patients. They quickly realized how big an issue housing was for those patients. Many had diabetes and depended on insulin — which needs refrigeration. Kidney failure was one of the most costly diagnoses for the hospital.

“We now knew where they were. We knew that they had a safe place to live,” said Elsa Inman, program coordinator at Mercy Regional. “We knew they would be more effective in managing their chronic conditions.”

The patients with stable housing were more likely to make it to their primary care and specialist appointments, more likely to stay on top of medications and keep their chronic conditions in check.

The combination of intensive case management and patient engagement helped to halve ER visits for the first 146 patients in the program, saving nearly $495,000 in Medicaid spending in less than three years.

Inman acknowledged that the hospital might have missed out on some revenue by reducing ER use by these patients. Hospitals are still largely paid by the number of patients they treat and the number of services they provide.

But most of those patients were covered by Medicaid, so reimbursements were low anyway. And the move freed up more ER beds for patients with more critical needs.

“We want to be prepared for life-threatening conditions,” Inman said. “If you’ve got most of your beds taken up by someone who can be receiving patient care outside in the community, then that’s the right thing to do.”

That was less of an issue for the inpatients at Denver Health. Because hospitals are generally paid a fixed amount for a given diagnosis, the longer a patient stays in the hospital, the more money the hospital loses.

“They’ve basically exhausted their benefit under any plan because they don’t meet medical necessity anymore,” Burnette said. “If they had a home, they would go home. But they don’t, so they stay in the hospital.”