This is Naked Capitalism fundraising week. 1189 donors have already invested in our efforts to combat corruption and predatory conduct, particularly in the financial realm. Please join us and participate via our donation page, which shows how to give via check, credit card, debit card, or PayPal. Read about why we’re doing this fundraiser and what we’ve accomplished in the last year, and our current goal, burnout prevention.

This week, the Wall Street Journal highlighted that the U.S. oil and gas shale industry, already struggling financially, is now facing “core operational issues.” That should be a truly frightening prospect for investors in American fracking operations, but one which DeSmog has long been warning of.

This one line from the Journal sums up the problems: “Unlike several years ago, when shale production fell due to a global price collapse, the slowdown this year is driven partly by core operational issues, including wells producing less than expected after being drilled too close to one another, and sweet spots running out sooner than anticipated.”

As we have reported at DeSmog over the last year and a half, the shale oil and gas industry, which has driven the recent boom in American oil and gas production, has been on a more than decade-long money-losing streak, with estimated losses of approximately a quarter trillion dollars. Those losses have continued in 2019.

This failure to generate profits led to the Financial Times recently reporting that shale investors are having a “crisis of faith” and turning away from U.S. oil and gas investments. That’s been bad news for frackers because the entire so-called “shale revolution” was fueled by massive borrowing, and these companies are increasingly declaring bankruptcy, unable to pay back what they borrowed because they haven’t been turning a profit.

Scott Forbes, a vice president with leading energy industry research firm Wood Mackenzie, also has noted the structural problems in the finances of the fracking industry, referring to the current business model as “unsustainable.”

When DeSmog first began reporting on the failed finances of the fracking industry, publications like the Wall Street Journal were writing about the optimistic financial future for shale companies. A year and a half later, that optimism has died. But all of these dynamics played out before the industry ran up against “core operational issues.”

The shale patch is seeing some serious pain today in junk-bond land as oil prices drop. Diamond Offshore, Rowan Cos. & Valaris bonds are the biggest losers, with bonds down 5 or more cents on the dollar. pic.twitter.com/1jkVBjdX9P

Over the last 10 years, the fracking industry has made impressive gains with technological improvements that have resulted in lower costs and higher performing wells. But despite these improvements, shale companies have failed to be profitable, and two years ago, industry analysts at Wood MacKenzie were warning about the limits of technology in overcoming geology.

More recently, the industry’s attempts to extract more oil and gas out of the shale — dubbed Fracking 2.0 by the Wall Street Journal — have flopped. Even the longest drilled wells have not made money, indicating a limit to optimal well length. Likewise, attempts to drill many wells in the same area — so-called cube development — haven’t been the financial savior the industry needs either. Perhaps the surest sign of desperation among shale firms is the issue of “frac hits” or “child wells,” an issue DeSmog flagged over a year ago. These companies are aware that if secondary or “child wells” are drilled too close together around the primary, or “parent well,” the fracking process can damage the nearby wells. And they also know that, as a result, these wells do not perform as well as those with greater spacing.

Nevertheless, they continue to do it.

Instead, wells are declining faster, meaning the output of the wells drops off very quickly and leads to lower overall well production — and more losses for the increasingly financially insolvent companies.

James West, a managing director at Investment bank Evercore ISI, assessed the situation for the Wall Street Journal. “We’re getting closer to peak production and we are reaching the peak of the general physics of these wells,” he said.

Perhaps the most important fact in the Wall Street Journal’s recent story was only mentioned once: “sweet spots [are] running out sooner than anticipated.”

Sweet spots are the areas of shale basins that have the best-performing wells. David Hughes, earth scientist and author of the 2019 report, “How Long Will The Shale Revolution Last: Technology versus Geology and the Lifecycle of Shale Plays,” has estimated that these sweet spots (also known as “Tier 1 acreage”) make up 15 to 20 percent of a shale basin (also known as a “play”).

In a recent online presentation, Hughes noted that these productive areas, “of course, are exploited first.”

As shale companies have chased profits, they first drilled the sweet spots, but now that most of those have been depleted, drillers must try to make a profit with Tier 2 acreage, which isn’t going so well.

Scott Sheffield, CEO of Pioneer Resources, told investors in August that “Tier 1 acreage is being exhausted at a very quick rate.”

In Hughes’ 2019 report, he maps the sweet spots of the Bakken Shale using well performance, with the highest producers shown in red. 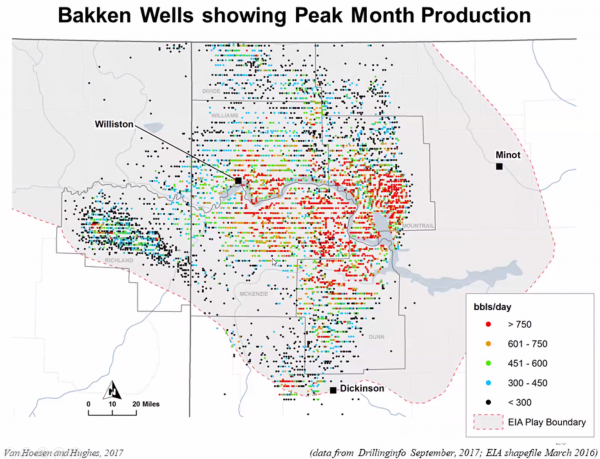 As the Wall Street Journal noted, “Across North Dakota’s Bakken Shale region, well productivity hasn’t improved since late 2017,” with a notably dismal example coming from fracking firm Hess. Bakken wells this company drilled in 2019 “…generated an average of about 82,000 barrels of oil in their first five months, 12 percent below wells that began producing in 2018 and 16 percent below 2017 wells,” the Journal reported.

There is plenty of evidence — including warnings from industry leaders like Scott Sheffield — that the fracking industry has depleted most of the sweet spots in the major shale plays over the past decade or so. With fewer of those plum acres left, firms are forced to drill in areas with less favorable geology for production, which means spending the same amount of money to drill wells but produce less oil.

And that means shale companies have no way to pay back the huge amount of debt, which they incurred to drill the sweet spots in the first place.

Even though it began as Enron Oil and Gas, a spinoff of Enron, EOG is considered the gold standard of fracking companies and has earned the nickname “the Apple of Oil.”

The Wall Street Journal reported the declining performance of new EOG wells in the Eagle Ford Shale, noting that EOG “declined to comment” on this issue, which is rarely an indication of good news.

Many signs are pointing to the fact that geology — how much oil and gas is present in the shale — will be the defining factor going forward for the U.S. fracking industry.

In June DeSmog reported that Steve Schlotterbeck, former CEO of shale company EQT, told a petrochemical industry conference, “The shale gas revolution has frankly been an unmitigated disaster for any buy-and-hold investor…”

Most of these companies are dead men walking.

We all knew a reckoning was coming in 2016/2017 but never thought it would come with such force. Truly a bubble bursting… pic.twitter.com/QuYx1q8fWe