By Mark Harrison, Professor of Economics, University of Warwick. Originally published at VoxEU

Economic warfare was widely used in WWII. When one country blockaded another’s supply of essential goods or bombed the industries producing them, why did the adversary’s economy fail to collapse? This column, part of the Vox debate on the economics of WWII, reviews Mançur Olson’s insights, which arose from the elementary economic concept of substitution. He concluded that there are no essential goods; there are only essential uses, which can generally be supplied in many ways.

Mançur Olson (1932–1998) is best known for contributions to the political economy of collective action (Olson 1965) and of comparative economic development (Olson 1982, 2000). In earlier work, Olson also provided novel insights into the economic adaptation of countries to international conflict.

When one country imposed trade sanctions on another, blockaded its food supply, or bombed its war industries, why did the results so often disappoint or surprise? This question puzzled and frustrated civilian and military leaders on both sides in two world wars. Olson proposed that the answer lay in the elementary economic concept of substitution.

The possibility of economic warfare arose when a country’s economy was fully employed in the supply of war. The strategy of economic warfare was to weaken an adversary’s fighting power by attacking it, not directly, but through its supply chain. The tactics of economic warfare then aimed to block or destroy supplies of the commodities thought to be essential to the enemy’s war production or its war economy more generally. It was a tactical success if ships were sunk or factories were destroyed.

But strategic success was achieved only if the enemy’s fighting power was weakened as a result. Given tactical success, would strategic success follow? Olson (1962) argued that the link from tactics to strategy would generally be undermined by the adversary’s adaptation. The key to this response, he suggested, was substitution.

Allied economic analysis suggested that ball and roller bearings were ‘essential’ to the supply chain of German munitions (Bollard 2019). From August to October 1943, the US Army Air Forces systemically attacked and largely destroyed the small number of factories around Schweinfurt that provided around half of Germany’s ball-bearing capacity. While the cost in aircraft and crew was heavy, the observed effect on German war production was near zero (USSBS 1946: 4-5).

Olson noted several reasons. A high proportion of Germany’s existing supply of ball-bearings was used unnecessarily, where plain bearings would also do. Plain bearings were easily substituted when the supply of ball-bearings failed so that the much smaller range of truly essential uses could still be met. In addition, to assure the essential uses, capital and labour were quickly diverted from other employments to rebuild the essential capacity in dispersed, less vulnerable locations. Thus, the German economy under attack was re-optimised for war by sliding along its production frontier, although at a cost to other less-important objectives.

This led Olson to be critical of model-based approaches to target selection (such as Wassily Leontief’s input-output framework) that assumed fixed coefficients in production and consumption. Such models implied that to deprive an economy of a single ‘essential’ commodity, whether ball-bearings, oil, or molybdenum, would be a crippling blow. But this followed entirely from ruling out substitution, which turned out to be crucial to the outcome.

In The Economics of the Wartime Shortage, Olson (1963) generalised his idea. He asked how Great Britain, of all nations most dependent on international trade, survived three major conflicts—the Napoleonic War and two World Wars—without famine. Olson noted that food was widely thought of as an ‘essential’ good and that, in all countries, food security loomed large in thinking about war preparations. This was the thinking of German leaders in two world wars when they applied submarine warfare to the blockade of the British Isles, aiming to cut the UK economy off from its main sources of food.

Olson rejected the idea that, in an integrated market economy, any one commodity, even food, was more essential than any other. At the margin, where choices must be made, the strategic value of a dollar’s worth of food would always be about the same as a dollar’s worth of anything else. In a rich society, food would have many uses, some essential and some inessential or luxurious. “It is not the type of good”, Olson wrote (1963: 9), “but the type of use that distinguishes a necessity from a luxury” (my emphasis).

Before WWII, Britain imported more than three-quarters of wheat and flour, oils and fats, butter, cheese, and sugar (Hammond 1951: 394). The Battle of the Atlantic was hard fought and very costly to both sides. By 1942, as Table 1 shows, food imports were running at just half the rate of the first nine months (October 1939 to June 1940). The loss of imports was only partly mitigated by a substantial increase in home production. Yet, after a dip at the end of 1939, British food stocks never fell below the pre-war level. 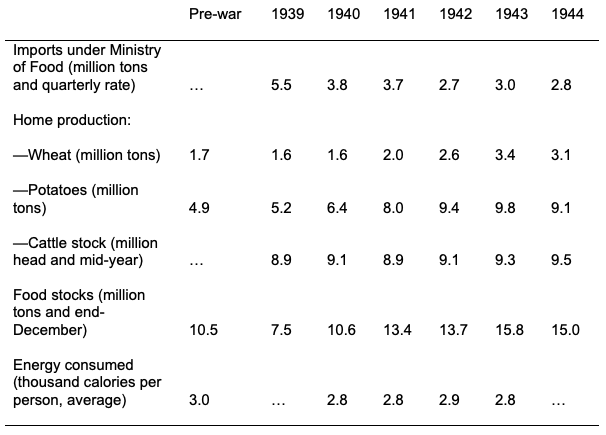 Most importantly, Table 1 shows the calories consumed per person remained essentially constant throughout the war, while their distribution was probably somewhat equalised by rationing. Rationing covered ‘luxury’ foods, but bread and potatoes were the most important sources of calories. These were never rationed, which also speaks to the adequacy of the food supply (Hammond 1951: 388). As for health, in 1942, deaths among children and adult civilians fell below the rates of 1939 and continued along the pre-war downward trend (Titmuss 1950: 521, 524).

Thus, Britain survived blockade despite initially relying on foreign sources for nearly two-thirds of calories for human consumption. Other countries that entered the war more nearly or entirely self-sufficient struggled and sometimes failed to feed their populations. They failed because they were poorer and so had fewer inessential uses of food at the outset or because their economies were insufficiently integrated so that efficient substitutions did not take place—or both.

The implications of Olson’s thinking were at the time, and remain today, contrary to the thinking of nearly all government leaders and advisers in every country, including Britain. For two centuries, the threat of war has prompted calls for a larger agriculture (or manufacturing industry), more food and oil security, and larger stocks of ‘essential’ goods. Any suggestion that the pursuit of self-sufficiency in such commodities is unnecessary, or even harmful, appears to lie well beyond the bounds of ‘acceptable’ discourse. Yet historical investigation shows that such efforts were often, if not always, misdirected.

It is tempting to swing the other way and conclude that economic warfare was always pointless or had no effect on the outcome of the war. Olson (1962: 313) took pains to reject this conclusion. He emphasised that supply-chain disruption was ineffective mainly when the economy was wealthy (so any commodity had many inessential uses) and when the commodity concerned was only partly interrupted (so enough remained for essential uses). He maintained that substitution had its limits.

As an example of when those limits were breached, he gave the German synthetic oil industry in 1944–45. Germany had no natural oil reserves and the pre-war creation of a synthetic oil industry was itself a substitute for a commodity in short supply. Access to Romania’s oilfields was lost in August 1944, making Germany entirely dependent on domestic sources. Repeated bombing of the oil plants in the summer of 1944 permanently reduced supply below consumption. By the time of the Ardennes offensive of December 1944, German plans relied on capturing Allied fuel stocks for their success (USSBS 1946: 8-9).

Four extensions are suggested. One is to the uses of economic assistance from one ally to another in wartime. During the decisive years of the war, the US economy, being twice the size of the combined economies of the UK and USSR, showered $50 billion of military-economic aid on Britain and the Soviet Union through the Lend-Lease programme. The framing purpose of Lend-Lease was “further to promote the defense of the US”—and nothing else. But that is not necessarily how the aid was used.

These resources were provided strictly to support Soviet fighting power. Because the external resources were at least partial substitutes for home resources; however, the Soviet authorities were able to respond by diverting those home resources to consumption and investment (Harrison 1996: 139-146). The re-optimisation described here was also an element in Olson’s later work (Olson and Zeckhauser 1966) on the free-riding problem in NATO.

Another extension is to the sources of national feeling in wartime. The effect of economic warfare on the enemy’s fighting power is indirect; it works via the economy. It follows that economic warfare always does ‘collateral’ damage to people who are civilians, whether or not they are part of the enemy’s supply chain. The result is often to stiffen the enemy’s resistance. The collateral damage inflicted on British cities by German bombers stiffened British resistance; the same done to German cities stiffened German resistance. The collateral damage of Germany’s submarine war on Atlantic shipping in WWI brought America into the war against Germany.

More generally, war is polarising and economic warfare extends that polarisation to the civilian population. This then facilitates what Olson saw as the enemy’s adaptation to economic warfare: economic warfare makes angry civilians more willing to tighten belts and make do with substitutes that would be unacceptable in peacetime. This does not make economic sanctions pointless, but it is a predictable consequence that should be reckoned with beforehand.

A third extension addresses the question: can economic sanctions be a substitute for battle? International relations since 1945 have provided many cases of economic sanctions aimed at forcing states to change their behaviour without bloodshed, most of them apparently unsuccessful (Jones 2015). Examples range from the Warsaw Pact countries in the Cold War to China, Cuba, North Korea, Southern Rhodesia, South Africa, Myanmar, Iraq, Iran, and Russia. In a few cases, sanctions or the threat of them have had completely unexpected side-effects: in 1941, US oil sanctions precipitated Japan’s attack on Pearl Harbor, while the fear of blockade was a factor in Hitler’s plan to seize the farmlands and oilfields of the Soviet Union. These examples suggest that economic sanctions may not ultimately save soldiers’ lives. They may achieve their goals only when backed up by the credible threat or use of superior fighting power.

Finally, Olson’s idea may be useful in illustrating the importance of economic analysis. When you teach the principles of consumer choice, consider whether your students may find the life-or-death consequences of substitution in a besieged economy to be a more impressive motivation than doughnuts versus pizza.