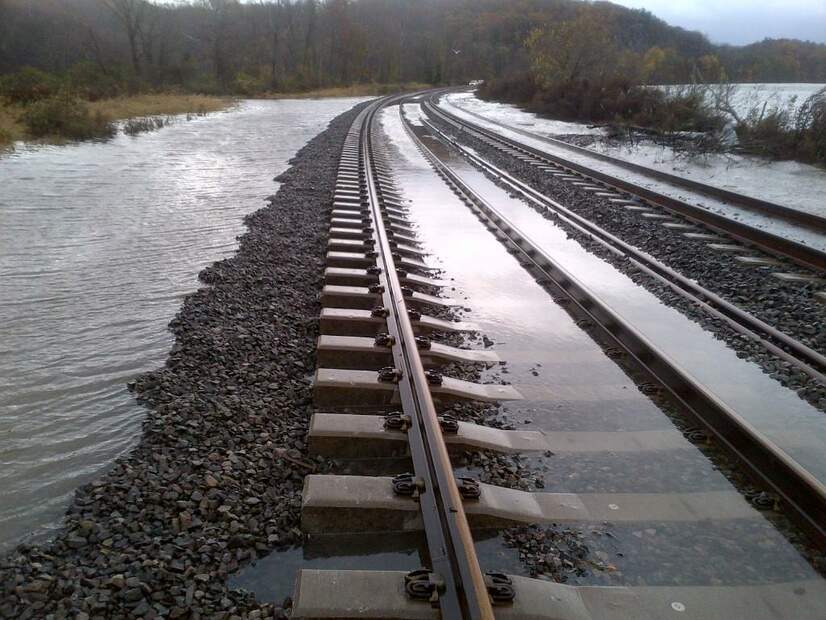 A recent paper analyzing the major players in the organized efforts to attack climate change science and delay action had a surprising revelation — the biggest contributing industry/sector was not oil and gas but rail/steel/coal with the most active organization in the climate denial movement being the Association of American Railroads (AAR).

In the paper, Networks of Opposition: A Structural Analysis of U.S. Climate Change Countermovement Coalitions 1989-2015,author Robert Brulle, looks at “key political coalitions that worked to oppose climate action. In conjunction with their allied trade associations, these coalitions have served as a central coordination mechanism in efforts opposed to mandatory limits on carbon emissions.”

And the allied trade association that was most active was the AAR. Why would the rail industry care about climate change and be active in promoting denial? Coal.

Coal has historically been the biggest business for U.S. rail, and still generates over 16% of Class 1 rail revenue in 2018, according to the AAR. Without coal the U.S. rail industry has a major revenue problem — which explains the decades of climate denial activity documented in this new paper.

Of course, the U.S. coal industry is in serious decline despite all of the climate denialism funded by the rail and coal industries. Moody’s has estimated that the rail industry is facing a loss of $5 billion in coal revenues (from current levels of approximately $10 billion) by 2030.

That reality hasn’t stopped the AAR from continuing to push coal while not acknowledging climate change. In a May 2019 publication on rail and coal, the AAR fails to mention climate change while also touting debunked ideas like “clean coal” as potential lifelines for the dying coal industry.

AAR and History of Science Denial

In my book, Bomb Trains: How Industry Greed and Regulatory Failure Put the Public at Risk, I document how the AAR has a history of adopting the climate change denial model of attacking known science to delay, deny and repeal safety regulations. This is the model that worked well for the tobacco industry and continues to be an effective method for lobbyists like the AARto work with members of Congress and regulators to prioritize corporate profits over public safety.

Much like how Exxon knew the science of climate change long before it started spending big money to mislead the public about that reality, the rail industry and the AAR have done the same with safety measures like modern electronically controlled pneumatic (ECP) brakes.

As I have documented for DeSmog, the rail industry and the AAR and regulators at the Federal Railroad Administration all have agreed that, based on the research, ECP brakes are far superior to the current brakes used on oil trains.

Until new regulations were proposed to require those brakes on oil trains in the future. Then the AAR and industry just changed the story and said there was no science supporting the safety benefits of ECP brakes — after years of being on record saying the opposite. In one case lobbyists for the AAR were in Washington, D.C. lobbying against modern brakes while a derailed oil train was still burning in Illinois.

The AAR even ran ads on Google attacking the facts of ECP brakes.

The industry has taken a similar approach to denying the science of the impacts of sloshing on train derailments and ignoring the risks of trains that are too heavy and too long.

And perhaps the most egregious example is the rail industry working with the American Petroleum Institute to deny the known science of oil that is the reason oil trains are known as bomb trains. The oil industry claims it doesn’t understand the science of oil — one of the great science denial claims of all time — and as with all such claims it is about putting profits over safety. The rail industry learned this lesson well.

While the rail industry has worked to protect its financial interests by supporting climate denial efforts, it also is an industry that is facing huge climate related challenges — well beyond just the loss of its coal business.

In March, the journal Transport Policy published the paper Impacts of Climate change on Operation of US Rail Networks that estimated the costs of temperature increases due to climate change could reach $45 to $60 billion by 2100.

Temperatures extremes — both hot and cold — cause big problems for railroads because metal rails don’t react well to extreme temperatures. The industry has known for years about “sun kinks” which is the term for when metal rails buckle in extreme heat which can cause train derailments.

In July, Mashable featured the issue of heat and railroads and the outlook wasn’t good.

“This is not a problem that’s going away,” Paul Chinowsky, a civil engineer at the University of Colorado Boulder and author of the Transport Policy paper, told Mashable. Chinowsky also noted that rail companies are already stopping traffic during the hottest times of the day in places like Virginia and Arizona. And the article notes the many problems for rail caused by the record heat wave in Europe this summer.

Just this week, Alex Hynes, the managing director of Scotland’s railway, admitted the reality of rail and climate change when he stated that, “The railway in this country can no longer cope because of climate change.”

Flooding on the Tracks

Extreme temperatures are not the only climate related problem facing the railroads. Due to the favorable topography, rail lines tend to follow bodies of water and often travel along lakes, rivers and the ocean putting much of the rail infrastructure at risk of extreme weather causing flooding and sea level rise flooding tracks.

One well known risk is the Northeast Corridor of Amtrak — the busiest stretch of track in the country that runs from Boston to Washington, D.C. — which is at risk of chronic flooding due to sea level rise.

Despite the clear evidence of the risks supported by a study that Bloomberg was able to acquire via a Freedom of Information request last year, Stepen Garder, Amtrak executive vice president and chief commercial officer, told Bloomberg that “We don’t see any fundamental risks to the integrity of the corridor.”

The reason given to Bloomberg why Amtrak didn’t release the report to the public was that “it could possibly cause public confusion.”  If the public is confused about the reality of climate change and sea-level rise the rail industry and AAR are a big part of the reason why.

Despite some attempts to continue to deny reality, the rail industry can’t hide from the facts forever.

On the website for rail company Union Pacific it acknowledges that “the Earth’s climate is changing” and then lists some of the potential risks including, “extreme weather events, such as blizzards, floods and hurricanes” as well as “the impact of potential sea level rise.”

The rail industry has a big climate problem that is going to cost it huge amounts of money and present some potentially unsolveable problems like, “Where do you relocate the busiest section of track in the country when it floods?”  The answer to that question is essentially … you can’t.

The rail industry engaged in short term thinking with its support of climate denial and now coal is dying and the bill is going to come due for the reality of climate change as it wreaks havoc on the rail industry.

Andrew Quinn, a civil engineer at the University of Birmingham and lead author on the paper Rail Adapt: Adapting the railway for the future summed up the new reality of how railways can no longer deny climate change.

“Every decision [rail companies] make should take into account climate change,” said Quinn. “This is an ongoing thing.”

The rail industry should stop wasting money on science denial because it will need every last dollar to deal with the looming climate-related crises it faces.