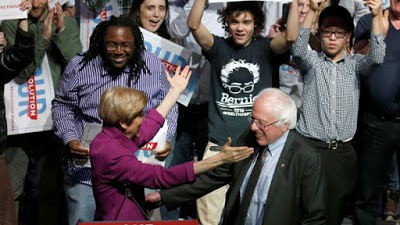 One of the more likely outcomes of this season’s primary race is that either Warren or Sanders will be the nominee. Not because either will get a majority of first-ballot votes at the convention, though that’s possible, but because it’s entirely likely that one of the two of them will enter the convention with the greatest plurality.

If that occurs, all signs point to the “loser” of the two in the plurality contest adding his or her votes to the winner’s total, creating a classic “unity candidate” — and a dicey-to-overcome-with-superdelegates majority candidate — when the second round ballots are cast. It doesn’t matter whether they both finish above the rest, just so that one of them does.

To see how this works, let’s say Sanders enters the convention with 38% of the pledged delegates, Biden (or some other centrist somebody) enters with 30%, and Warren enters with 28% — made-up numbers for sure and not a prediction. If Warren tells her pledged delegates to vote for Sanders on the second round, Sanders will have 68% of the ballots (assuming the follow her lead), a total more than enough for Sanders to claim the nomination.

The same is true if they finish one-and-two and the delegate counts are close. Let’s say Warren enters the convention with 42% of the pledged delegates, Sanders enters with 40% (again, made up numbers), and the remaining 18% are split in various ways.

In that case, it makes sense for Warren to be the nominee with Sanders’ second-ballot support — which is how I’m sure Sanders will see it. Thus the alternative isn’t worth talking about — a fight between the two that would only open the door for superdelegates to do as much anti-progressive damage as they can.

Even if you think Warren is only halfway between Sanders and Biden on the progressive scale (domestic policy only; see below for her domestic policy), halfway is better than no way at all. It’s certain at least that Sanders will see it that way.

This is not to say that primary voters should be sanguine about the Sanders v. Warren contest. On the contrary, Sanders and Warren are not only not the same, but they are very different in striking and important ways — which means that it matters which of them enters the convention with the most delegates. And in my view, it matters a lot.

How Are Sanders and Warren Different? Counting the Ways.

The person who’s done the best job of laying out all the ways it does matter is Current Affairs contributing editor Eli Massey in a recent series of tweets. I want to extract what he wrote so his list can be put on one place. Here’s Massey’s opening tweet:

The following is his list, with links where he includes them (bolded emphasis mine, lightly edited for clarity and to correct errors):

2) Sanders has a plan to end homelessness in the U.S., Warren does not.

This one requires some discussion, but not for now. The issue is usually put as, “Should the hard-working retain their wealth? versus “Is a society with billionaires a fair or safe one for the rest of us?” — bypassing, of course, the question “How many billionaires earned their wealth in the first place?”

After all, as a wise man once wrote, “Behind every great fortune is a great crime.”

4) Sanders IDs as a Democratic Socialist, Warren is a “capitalist to [her] bones.”

6) Sanders voted against all of Trump’s military budgets, Warren voted for some.

7) Sanders called for former Brazilian President Lula da Silva to be freed from prison, Warren did not.

8) Sanders has a long, proven anti-war record, Warren does not. Article detailing some of the differences:

9) Sanders has called for cutting military aid to Israel and redirecting it to provide humanitarian assistance in Gaza, Warren has not.

10) Sanders has the superior environmental policy and approach to combating climate change. This article from @CarlBeijer gets at some of the differences:

11) Sanders will cancel all student debt, Warren will not.

12) Sanders will cancel all medical debt, Warren will not.

14) Sanders calls for abolishing ICE, CBP, and USCIS, plus the full demilitarization of the border, Warren does not.

15) Sanders has made labor rights & growing unions a central part of his campaign in a way that Warren has not. Sanders has pledged to double the number of workers that belong to a union during his 1st term. Here’s an article detailing some of his labor plans:

On foreign policy, where the differences are massive, Massey adds:

Foreign policy and environmental policy alone are reason enough to back Sanders over Warren, given the monumental stakes for each.

Despite the understandable obsession with domestic policy, historically foreign policy is where presidents are able to do as they please, e.g., without oversight from congress. It is for this reason that I think foreign policy ought to be weighted significantly.

His conclusion: “I should add that I think Warren is the second least terrible viable presidential candidate, but her differences from Sanders are, in my opinion, significant.” I echo that.

My conclusion: The future of this country for the next generation will be written at the 2020 Democratic convention, either because the nominee chosen will be unable to defeat Donald Trump, or because the nominee chosen — Sanders, Warren or someone like Biden — will take the country down definably different paths, each of which will persist until the next great crisis, which is coming sooner than anyone admits.

These are urgent times. Two violent tsunamis — extreme climate disruption, which has already started; populist revolt against bipartisan neoliberal rule, which almost brought us Sanders and did bring us Trump — are already misting our faces. We may have just one more shot at getting the whole thing right.

Getting the whole thing half-right may be better in the short term than getting it entirely wrong, but our grandchildren won’t praise us for saving our own futures at the expense of theirs.