It’s not a good look when financial disclosure deadlines result in a company ‘fessing up to ugly truths. Boeing has had to admit that its fond hope that the FAA would give the troubled 737 Max a green light in February or March was optimistic.

The airline announced it estimated that the “ungrounding” of the 737 Max would start in “mid 2020” which it by which it indicated it means June or July. And remember, it takes time to get planes out of mothballs, plus pilot simulator training looks like a probable requirement, so it would be a couple of months after that before the planes were back in service. Boeing’s stock price fell by over 5% on this news to close down 3.3% for the day.

That means another summer of running fewer flights than they’d planned for Southwest, American, and other 737 Max buyers. The Wall Street Journal states that having the 737 Max out of service has reduced the global passenger airline capacity by 5%.

And if you read the various stories on the state of play with the 737 Max, this early-mid summer forecast is yet another guess. An article in the Seattle Times, based on a single source at an airline, claims the aircraft maker is being conservative and the plane may be good to go earlier.

The reality is that Boeing does not know. It has a punchlist with the FAA that it has to clear up. The new CEO Dennis Calhoun has only officially been in the CEO seat for a week. He no doubt really does want to manage expectations better….but making this announcement under what amount to duress isn’t a confidence builder.

However, the company had to provide internal assessments of the MAX return to close its 2019 accounts, with fourth-quarter earnings due to be reported on Jan. 29. Boeing issued its statement Tuesday after a report by CNBC.

Boeing’s revised estimate takes into account extensive reviews expected by regulators, new hiccups that could emerge and the potential to approve additional simulator training for pilots, one of the people familiar with the projection said….

While Boeing’s previous estimates for when regulators would approve the MAX have irked the FAA, the plane maker felt compelled to provide an update for financial planning and to inform airline customers and suppliers, this person added. Boeing notified the FAA of its revised estimate on Tuesday, this person added.

Notice the FAA will not give any forecast. Per the Financial Times:

The FAA said in a separate statement that “the agency is following a thorough, deliberate process to verify that all proposed modifications to the Boeing 737 Max meet the highest certification standards”, adding: “We have set no timeframe for when the work will be completed.”

The pink paper pointed out that FAA Director Steve Dickson had said in December that the Boeing had almost a dozen items to clear up, but the Financial Times also said that the latest MCAS software problem wasn’t the basis for pushing back the estimated back-in-service date.

My assumption as to why the estimate of when the plane would be back in service affects 4Q earnings is liability reserves. Boeing already plans to compensate buyers for having grounded 737 Max planes via concessions on future purchases. In addition, the Southwest pilot’s union is suing Boeing over lost member flying time. As of when the Southwest union filed its suit, no other union planned to file similar actions. But will this posture hold if the grounding continues?

According to the Seattle Times, Boeing maintains even with the further delay, it won’t be cutting headcount. But the financial pain is set to increase. From the Financial Times:

Airlines may be less eager to accept deliveries during their autumn slowdown, said Bank of America Merrill Lynch analyst Ron Epstein. Purchasing contracts also usually allow airlines to walk away after a year, giving customers the muscle to negotiate discounts from the plane maker. It also prolongs the cash bleed at Boeing, which Mr Epstein estimates at $1.5 billion per month.

Wolf Richter looked at Boeing’s sorry state before this bout of bad news broke, focusing on its continuing borrowings to cover its cash bleed. Key points:

The first thing to know about Boeing’s mad scramble to line up “$10 billion or more” in new funding via a loan from a consortium of banks, on top of the $9.5 billion credit-line it obtained in October last year – efforts to somehow get through its cash-flow nightmare caused by the 737 MAX fiasco – is that the company blew, wasted, and incinerated $43.4 billion to buy back its own shares since June 2013, having become a master of financial engineering instead of aircraft engineering…..(share buyback data from YCharts): 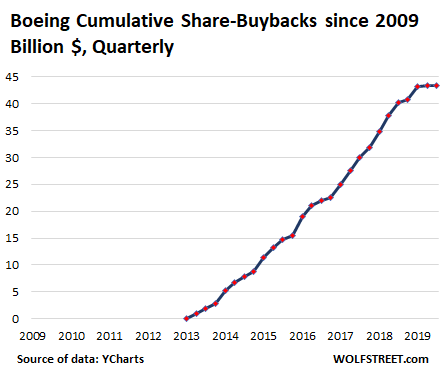 The second thing to know about Boeing’s mad scramble to borrow another $10 billion is that it already has a huge amount of debt and other liabilities, and that its total liabilities ($136 billion) exceed its total assets ($132 billion) by about $4 billion as of September 2019, meaning that it has negative net equity, that the share buybacks have destroyed its equity, which is what share buybacks do to the balance sheet.

It also means that every dime in “cash” and “cash equivalent” listed on the balance sheet is borrowed. And this is about to get a whole lot worse. In October 2019, Boeing had already obtained a new credit line of $9.5 billion, which about doubled the size of its existing credit line. Credit lines serve as liquidity backup.

And now Boeing is scrambling to pile “$10 billion or more” in new loans on top of it.

Recall that Matt Stoller pointed out that Boeing is virtually alone in using an aggressive accounting approach that allows it to count expected future profits as if they were already earned 9emphasis his):

Boeing is one of the few companies that uses a technique called program accounting. Rather than booking the huge costs of building the advanced 787 or other aircraft as it pays the bills, Boeing—with the blessing of its auditors and regulators and in line with accounting rules—defers those costs, spreading them out over the number of planes it expects to sell years into the future. That allows the company to include anticipated future profits in its current earnings. The idea is to give investors a read on the health of the company’s long-term investments.

If Boeing and the FAA are still at loggerheads in six months, with still no date for the 737 Max going into service, it isn’t just that pressure on Boeing’s suppliers and customers will become acute, perhaps catastrophic for some. Boeing’s practice of booking future, yet to be earned, profits as current income means persistent negative cash flow could lead to an unraveling. The last time we saw similar accounting was how supposedly risk free future income from CDOs was discounted and included in the current earnings of banks. Remember how that movie ended?

And as this fiasco continues, Boeing loses more credibility with a critical audience, airline passengers, who unlike suppliers and customers, do have option. On the one hand, it’s easy for a traveler to vow “Never a 737 Max” or “No 737 Max until they’ve been safely in the air a year” and quite another to pay extra for that choice or refuse to board last-minute replacement equipment and incur time as well as money losses. But the flip side is US travelers can stick to the 737 Max-free Delta. And the customers most likely to throw their weight around this way are the lucrative front of the plane fliers.

The plural of anecdote is not data, but the comments to the latest Wall Street Journal article on the 737 Max suggest the reputation problem is real. For instance:

I am certainly not flying on the Max until plenty of other guinea pigs have.

There is no way I will get on one of those planes.

The 737 MAX will forever by know as The Flying Coffin. Better to scratch it from the fleet and sell the remaining planes to Iran.

I would cancel my flight before I got on a 737 MAX. No doubt about it.