Yves here. One consideration that slightly ameliorates the downside scenario in this post is that China really has no other way of contending with a serious contagion like the coronavirus, whether it rises to a pandemic level or not, than quarantine and other methods to enforce greatly increased social distance. China has a woefully tiny modern health system relative to advanced economies, and still relies heavily on traditional medicine.

From an article sent by Troy P in Baldings World:

Delivery of high quality effective medical care and public health solutions in China suffers from a variety of problems. One of the most challenging is low levels of human capital in health care systems. According to one study, China has only 60,000 general practitioners or one per roughly 23,000 people. By comparison, in the United States there are 1,500 people per general practitioner. If all things were equal, this would mean Beijing one of the largest cities in the world would have fewer than 1,000 general practitioners. Nor are many medical professionals well trained. In community health centers, less than one fourth of doctors have a bachelor’s degree. Even as recently as a decade ago, only 67% of Chinese doctors had only been educated up to the junior college level, hardly enough under any reasonable standard to be a highly qualified medical professional.

The human capital deficiencies are compounded by government priorities. Buoyed by nationalistic support from Chairman Xi Jinping to traditional Chinese medicine, it occupies the second largest market share of the retail drug market behind chemical pharmaceuticals 29% to 43%. Leaving aside the weak evidence of traditional Chinese medicine efficacy in clinical trials, it diverts enormous resources from mainline medical service delivery and research at the altar of nationalistic sentiment. Addressing major public health challenges are better targets for public spending than boosting nationalist fervor.

Then oddly enough, health centers might be the only construction market in China to have missed out in the past decade. In 2009, China had 917,000 health institutions but by 2018 this number had only increased to 997,000 increasing roughly 1% a year. What has been happening however is a concentration of larger hospitals who are responsible for majority of growth in visits, bed space, and new institutions. This has led to wildly divergent health services. Primary level hospitals, the smallest hospitals in smaller towns, have bed occupancy rates of 57% while third level hospitals, which are the biggest and most advanced in bigger cities, register 98% in 2018 and 102% in 2014. In other words, in cities like Wuhan, hospitals the primary center of care for corona were already stretched beyond the breaking point.

These facts confirm our reaction when China rushed to construct a new hospital in Wuhan: so what? If you can’t staff it, what are you accomplishing? We had assumed it would be difficult to impossible to get qualified personnel (doctors with expertise in pulmonary ailments) to come to Wuhan even before we learned of the scarcity of medical personnel in general in China. Is the new hospital for show or merely to isolate people known to be sick? My understanding is that another constraint in any medical system, and it is bound to be much worse in China, is that the best hope of saving a severely ill coronavirus victim is to put them on a respirator…equipment not in great supply even in Western hospitals.

First the latest update from Beijing:

On the same day, 600 new patients were discharged from hospital (324 in Hubei), and 31,124 close contacts were lifted from medical observation.

As of 24:00 on February 8, according to reports from 31 provinces (autonomous regions and municipalities) and the Xinjiang Production and Construction Corps, there were 33,738 confirmed cases (including 6,188 severe cases), and a total of 2,649 discharged patients were cured (Heilongjiang reduced one) A total of 811 deaths have been reported, 37,198 confirmed cases have been reported (1 in each of Shanxi, Heilongjiang, Henan, and Hainan), and there are currently 28,942 suspected cases. A total of 371,905 close contacts were traced, and 188,183 close contacts were still in medical observation. 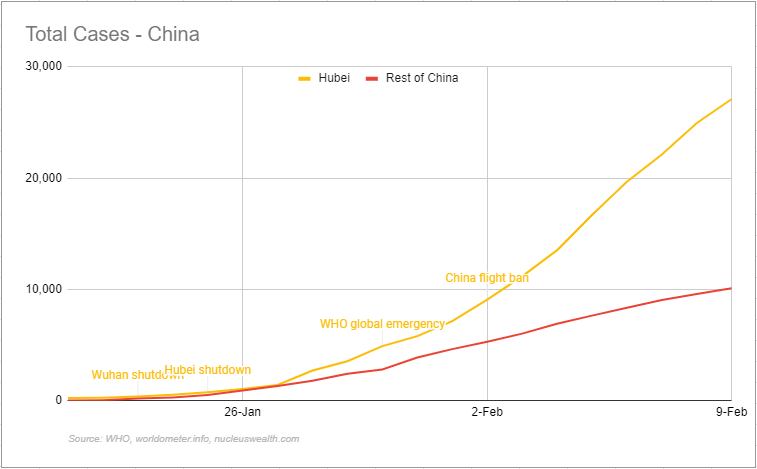 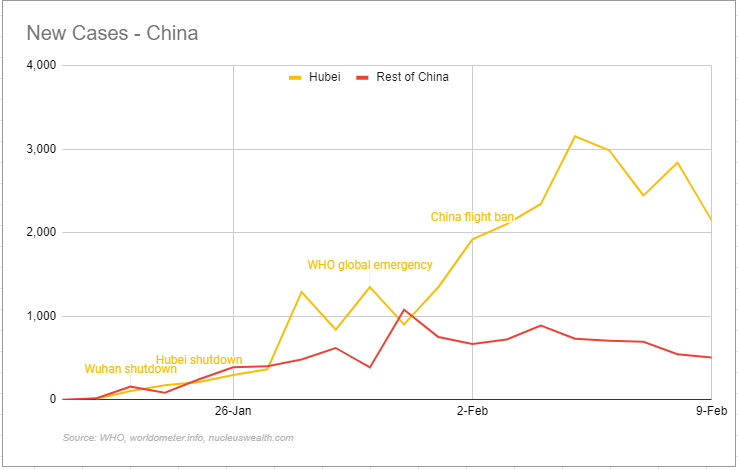 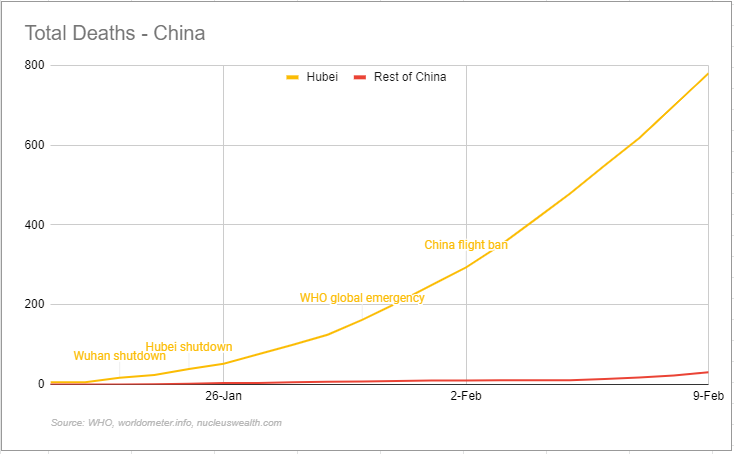 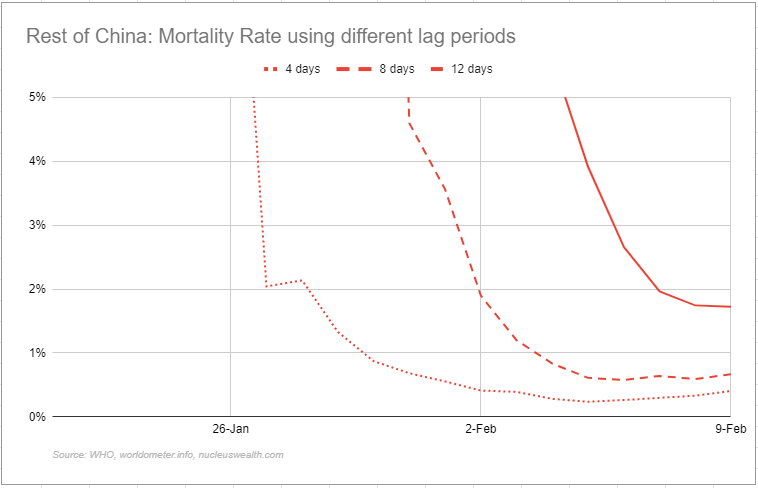 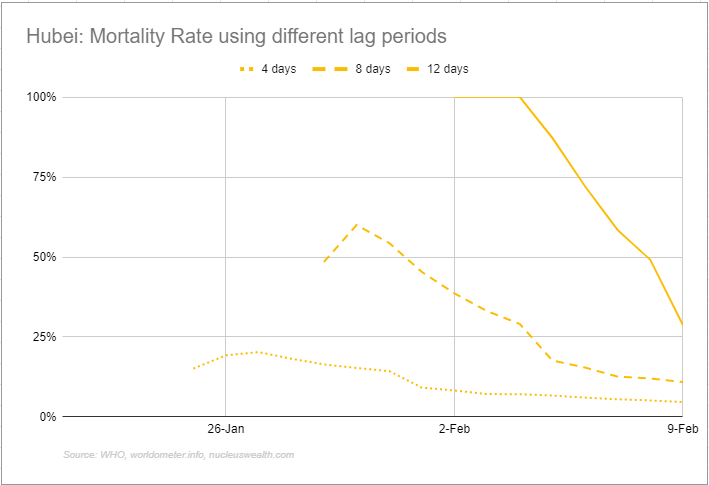 The most important news on the weekend was that Guangzhou (13m people) and Chengdu added draconian restrictions to their populaces and Apple assembly partner, Foxconn, was forced to close for another week.

It’s become impossible to track how many Chinese are now locked down. Most of the country to one degree or another. Some are reporting 400m. That is plausible.

The upside is that the shutdown appears, for now, to have slowed the virus spread in China. That’s great news. If you believe it.

The problem is, there are very good reasons to not do so. The epicenter of the outbreak in Hubei is clearly massively worse than is being made out. The number of deaths and other marginal indicators suggests 10x worse, via Bloomie:

The new coronavirus may have infected at least 1 in 20 people in Wuhan, the Chinese city at the epicenter of the global outbreak, by the time it peaks in coming weeks, according to scientists modeling its spread.

The typically bustling megacity, where the so-called 2010-nCoV virus emerged late last year, has been in lockdown since Jan. 23, restricting the movement of 11 million people. Trends in reported cases in Wuhan so far broadly support the mathematical modeling the London School of Hygiene & Tropical Medicine is using to predict the epidemic’s transmission dynamics.

That’s half a million people infected…

That discrepancy is indicating something else very important for the political response to the virus.

What’s Good for the CCP

The question is, what path is best for the CCP? Let’s not delude ourselves into thinking any other question matters, whether that of the Chinese public interest or our own. The CCP will do what best secures its power base amid one of the greatest threats to its rule since Tianenman Square.

At the moment it is caught between the need to defeat the virus and the vast ecomic damage being done by doing so. To date, it has managed this binary by lying about the severity of the virus and controlling the media narrative while deploying immense containment shutdowns. But with each passing day the economic damage makes this more difficult, right down to the basics of supplying food to 1.3bn people. It’s surely impossible for the CCP to sustain full lockdown for much longer without doing itself serious political harm.

It is probably true that the shutdown has limited the virus’ spread in wider China if not Hubei. But going back to work isn’t going to do that. And the virus is a long way from being eliminated.

This raises the prospect that, as virus containment and the economy come into greater conflict, the CCP may decide that its own best interest is served by letting the virus spread worldwide. Why? Becasue at least then it can throw its hands up and say “we did our best but this virus is beyond all human intervention”. An excuse that may wash with the Chinese people.

If so, it will allow its containment effort at home to slip while lying about it succeeding, and put a lot of pressure upon other nations to open their borders.

The Good of Other Nations

There is a problem if that’s the way the CCP is going. Most pointedly, Chinese authorites have inadvertently illustrated how best to combat the spread of the virus.

In Hubei, where authorities hid the truth and allowed the virus to spread, the mortality rate is massively higher than elsewhere. There are many reasons for this, not least being the outbreak began earlier and it has more cases. But perhaps the most important is that, once out, the virus proved virulent enough to overwhelm its public health system. Without proper treatment, the mortality rate skyrockets.

In short, the first order response for all nations is draconian quarantining of any outbreak so that any given health system can manage the outbreak at a pace it can cope with. If you allow the virus to spread unchecked even for a few weeks then it threatens a mass casualty event as it overwhelms response capacity.

Thus any government that opens up to China too early will find itself at risk of another outbreak, with the risk of higher deaths, versus the economic need to restore connections. Getting this balance wrong will trigger politically fatal allegations of killing citizens.

But any kind of ongoing isolation of China by other nations threatens the CCP. So it will ramp up pressure to release global clamps on its economy, and governments everywhere will find themslves caught between between Scylla and Charybdis.

The mind really begins to boggle when we consider the virus will likely get loose in less developed nations. There is some hope that it will not spread as fast in warmer climates but not enough to stop it. That could throw up an endless sequence of economic shutdowns applied piecemeal across the world as different governments respond.

It also raises the greater prospect of mutations and further pandamic waves.

There are no good outcomes. China has slowed but not contained the virus. It is very contagious and sending people back to work will bring it back on, jeoparding the CCP. Keeping them at home will jeopardise it even sooner.

The CCP is attempting to lie its way out of the conundrum. Other nations will be caught in the web. If so, nCoV will very likely spread globally, leading to a rolling shock of shutdowns all over the place.

Our base case is now a rolling shutdown in China for three-to-six months, rolling shutdown of contained outbreaks globally, with worse cases in EMs. This will hammer the global economy into recession and risk all kinds of financial contagion.

The upside risk case is no longer a SARS repeat. That hope is dead. It is that China contains the virus outside of Hubei over another few months as it incremantally opens up and stimulates wildly. This still delivers material damage to the global economy with a lighter recession held back by sporadic outbreaks of nCoV.