The year is 2017, and Verity Jane is a talented “app whisperer” who is hired to test a new artificial intelligence called “Eunice.” Verity soon becomes aware that the AI is quite powerful, something that she hesitates to share with her employers. But she can’t hide for long. While Agency opens in 2017, it is a book with both feet placed firmly in the future—a novel of variable timelines, including one set in London where shady characters can reach back into the past to manipulate Verity’s present. The book is a sequel of sorts to Gibson’s 2014 novel The Peripheral—it is set in the same universe and shares some characters—but it can be read on its own. With its pithy short chapters and mind-bending plot, with the recognizably erudite characters and Gibson-esque language and dialogue, and with the inventiveness of a great science fiction, this is a fun first read of the new decade. Agency will entertain you, but it will also leave you with thoughts to chew on.

Shorter: Agency is a rollicking good read. Reviews have mostly been laudatory (Cory Doctorow; the Guardian). Structurally, Agency is an extended chase scene, where the good guys from the future (recycled from the previous book in the series, Peripheral) protect the heroine of our present’s 2017 (Verity Jane), using clever tech tricks, as she bears her MacGuffin (the AI, “Eunice”) through a series of hair-raising escapes, to the climactic reveal, contrived by a Silicon Valley tech oligarch (Jane’s former boyfriend), on top of a skyscraper in San Francisco, in which “Eunice” announces herself (and her pronouns) to the world. The book ends with a coda where all the loose ends are tied up, as is typical of Gibson; as it turns out, the happiest of the happy endings is that President Clinton, aided by “Eunice,” prevented a nuclear war with Russia.

Now, I have priors; I found it worrisome that a Clinton presidency would be the premise of a Gibson novel, whether such a future be distributed evenly or not. That said, I strongly disliked the Agency, partly for its texture, but also because of its ugly politics (and not simply electoral politics).

As for texture, Gibson (at least to my ear) has always had an Elmore Leonard-like ability to make me hear the sound and rhythm of individual voices through his prose; an amazing talent. Hollis Henry sounds like Hollis Henry, Milgrim sounds like Milgrim, Cayce Pollard sounds like Cayce Pollard, and so on. This uncanny talent seems to have deserted him in Agency (except, oddly, for “Eunice”). So all we are left with is the chase scene, which is, as it were, a silent movie (perhaps accompanied by Gibson playing furiously on his techie Wurlitzer). Further, the characters are flat[1]. (That especially goes for the random characters introduced to advance the chase from scene to scene.) Although Gibson recycles stock figures from The Peripheral — the publicity agent, Wilf, is much less interesting now that he’s sober — he abandons the wonderfully, fully-realized character Flynn (see at NC here for Wilf explaining “The Jackpot” — Gibson’s word for oncoming, Jared Diamond-like collapse, common to all the timelines — to FLynn) in favor of recycling various techs and mercenaries to further the chase scenes. The only character in Agency that could be said to be rounded is “Eunice,” the AI (and if that’s the point, it surely shouldn’t have taken 400 pages to make it). For example, the heroine, Verity Jane[2] is introduced as an “app whisperer,” but there follow no details of her work, in great contrast to Cayce Pollard, the logo consultant in Pattern Recognition, whose professional interactions and dealings Gibson describes in detail, and which serve to reveal her character. No, Verity lugs her MacGuffin to the reveal, and that is that.

So much for Agency‘s shoddy texture. Now let us turn to Agency‘s politics, first electoral, then politics as such. (I’m going to use screen dumps from Amazon “Look Inside!” instead of typing in the passages, so please forgive the formatting. To the screen dumps, I’ve added some numbered highlights, which I will, confusingly, consider in reverse order.)

First, on electoral politics, the set-up, where nuclear war is prevented. This is a conversation between Verity and “Eunice,” begun by Verity. From page 384: 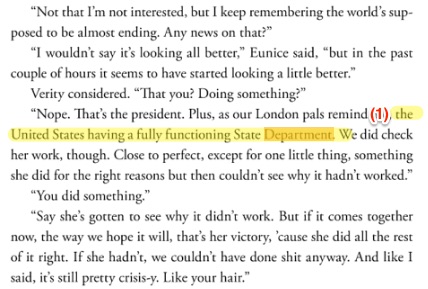 (The “London pals” are people from the alternate timeline in the future; Wilf, for example. I’ll get to the highlighted portion in a moment.)

And now, the happy coda in a hipster bistro, “Wolven + Loaves.” This conversation is general, except “she” is Verity, and the bold Helvetica is “Eunice,” communicating via text to Verity alone. From page 400: 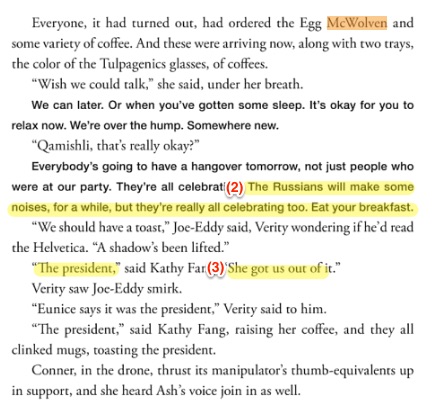 (Qamishli is the site from which a nuclear incident did not escalate. All the speakers except for, possibly, “Eunice,” are flat ficelles, Connor being recycled from The Peripheral.)

From point (3), we see that Hillary Clinton (“she”) is President, as promised, in Agency‘s timeline.

At point (2), problems begin to arise. Sadly but not unexpectedly, we have what has become the typical obsession of the professional-managerial class with Russia[3]. More importantly, Gibson never does give the background to the Qamishli incident. If we go by Clinton’s past statements, it’s most likely that she instigaged the incident herself. For example, Clinton supported a no-fly zone in Syria. Here General Joseph Dunford, Chairman of the Joint Chiefs of Staff, explains that would have meant war with Russia:

So, indeed, those weak sisters, the Russians, “will make some noises for awhile,” as would, I suppose, anybody else appalled at an act of nuclear brinkmanship, successful or no. Good thing the entire timeline wasn’t “toasted,” eh?

And now point (1): “”… the United States having a fully functioning State Department.” This is an anachronism. In this timeline, Obama (presumably) was President, and the State Department (presumably) was “fully functioning,” after then-Secretary of State Clinton’s careful stewardship. Then we had election 2016, and Clinton defeated Trump. It is now 2017. But the State Department could be said to have been made dysfunctional only after Trump’s election, by Trump, which did not happen in this timeline! So perhaps a little Trump Derangement Syndrome has snuck into “Eunice”‘s programming? Or Gibson’s plotting?

Second, to politics as such. This, to me, is the key passage in the book. Verity is in conversation with Inspector Lowbeer and Wilf’s wife, Rainey, both “London Pals.” From page 202 (see, again, numbered highlights to be considered in reverse order): 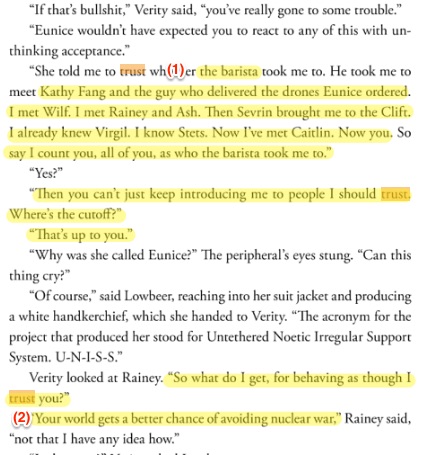 First, point (2): We have a political outcome: The prevention of nuclear war.

Point (1): We have the means to the outcome (also links in the chain of the chase scene): Barista -> Kathy Fang -> Wilf -> Sevrin -> Caitlin -> Lowbeer, most of them linked and known either by a personal reference or through precarious, contract-like tasking. In other words, we have the moral of the story: To create a political outcome, develop and use a personal network. This is very Silicon Valley indeed, but consider by contrast:

[1] For the distinction between flat and round characters, see the Brittanica: “Flat characters are two-dimensional in that they are relatively uncomplicated and do not change throughout the course of a work. By contrast, round characters are complex and undergo development, sometimes sufficiently to surprise the reader.”

[2] I really did call this before Agency came out:

(And, of course, the incomparable Flynn.) Well, I got “self-parody” wrong. Ciphers aren’t generally parodic.

[3] Gibson might be said to be “the PMC Whisperer.” Back in the ’90s, he successfully cool-hunted not only the Professional-Managerial Class’s obsession with Russia, but its fascination with intelligence community tradecraft and mores, both which of course assumed, in our timeline, monstrous, distended, cancerous form with the Steele Dossier, Mueller, RussiaGate, etc., all instigated by the Clintonite faction of the Democrat Party and its allies in the press, the intelligence community, and the national security bureaucracy. Oddly, this positively Vespasian-like history is not featured in Agency. Though I should probably unpack the reference to Vespasian. From The Peripheral:

“Vespasian” was a weapons fetishist, famously sadistic in his treatment of the inhabitants of his continua [timelines], whom he set against one another in grinding, interminable, essentially pointless combat, harvesting the weaponry evolved….

Searching for usage examples, I stumbled on one from Gibson himself. A “stub” (“continuum”) is a timeline:

(I love “AlternateRealty.” Brings a new dimension to “speculative fiction,” that would, no doubt, be appreciated by Leo Bohlen of Martian Time-Slip). Like I said: The PMC Whisperer.

I need a more subtle approach than “PMC.” I am all for class traitors!