Yves here. A useful discussion of a flawed but widespread take on Dem candidate viability. 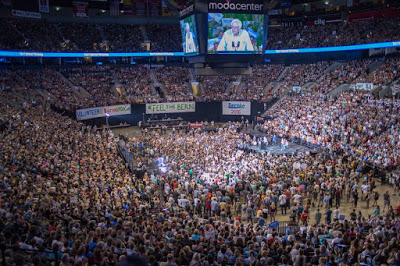 If you put all of the crowds that flock to watch Warren, Buttigieg, Bloomberg and Biden into this arena, would they fill even half of it?

The “Prisoner’s Dilemma” is a game often analyzed in game theory. In its simplest form, it looks like this:

Two prisoners are accused of a crime. If one confesses and the other does not, the one who confesses will be released immediately and the other will spend 20 years in prison. If neither confesses, each will be held only a few months. If both confess, they will each be jailed 15 years. They cannot communicate with one another.

So what’s a prisoner (player) to do? Self-interest suggests each player will race to confess in order to win the Get Out Of Jail Free card. Yet doing that guarantees both will lose, and a long jail sentence for each. The only way for both to win is for each to stay silent and trust that the other do the same. The problem for both? They have no way to coordinate their responses.

The current Democratic candidates for president may be playing a variation of that game — or not, depending on whether you think Bernie Sanders could today beat each of them in a head-to-head contest.

But if you do buy into the argument that Sanders would lose to most of them if he faced only one of them, the problem can be stated like this:

Bernie Sanders has only 30% of the vote. Biden, Bloomberg, Buttigieg and Klobuchar each have 18%, 14%, 10% and 5% respectively, for a combined total of 47%. If Biden, or Bloomberg, or Buttigieg, or Klobuchar were running alone against Sanders, Sanders would lose since the anti-progressive forces would coalesce. But none of them can win because all of them are running. [Data snapshot here.]

If this correctly analyses the state of the “game,” what’s a player to do?

Obviously, all but one of the players must drop out. But which one should stay in? That’s the Candidate’s Dilemma. They all want to be the one who stays in.

The Candidate’s Dilemma: Why Won’t the Rest of You Let Me Win?

Alexandra Petri has caught this dilemma perfectly in a satirical piece for the Washington Post. Petri imagines herself a candidate (she could be one, after all; the field contains at least one person who has yet to campaign and has amassed no delegates).

We must stop Bernie Sanders, and I see no path forward but for my opponents to drop out

…Now is the time to act! It is imperative that we concentrate our efforts to stop Sen. Bernie Sanders (I-Vt.), and that is why I see no path forward for my campaign but for my opponents to drop out of the race.

I call on them to stop calling on me to drop out on the grounds that I lack some combination of popular support, a staff, pledged delegates, cash on hand or a path forward. In fact, I am the only one with a path, assuming that several of them drop out, in which case I will be the clear front-runner to stop Sanders. The only reason I have not yet demonstrated my ability to beat him is because everyone else is still here.

I don’t know what they think their paths are! I guess they assume I will drop out, and they will get my support, which will never happen! No, never, not while there is breath in my body or dollar in my bank account.

On Petri’s part, this is satire. On the part of non-Sanders Democratic candidates, this is wishful thinking.

There probably was a time, back when Biden seemed lucid even when he wasn’t, back before the first votes were cast in the first state to cast them, when Sanders might not have placed first in a narrower field. Would Sanders have gained the momentum he now has if, before Christmas, he had only Biden to face, or any of them?

Maybe not. But today Sanders is soaring, while Biden is fading fast, Buttigieg is more and more seen as an empty suit, and Warren, Buttigieg and Klobuchar all are leaking  or lacking support in minority communities. Each has been reduced to electoral midgets by the last three contests.

Yes, you could stack the midgets one on the other today and dress the result like a single taller candidate, one face representing the rest, but each face alone would not made more pleasing by the sudden disappearance of the rest. Would all of Biden’s black support move to Warren or Bloomberg if Biden were gone? Some would certainly go to Sanders. Would all of Buttigieg’s wine-track support move to Warren or Klobuchar? Some would surely go to Sanders or stay just home.

The Time to Pick Just One Opponent Was Yesterday

The Prisoner’s Dilemma analogy fits today’s situation only in the past. The time for these candidates to unite behind just one of them was yesterday, a day they will never have back, a day when each was flush with ambitious and hope. Which of them would play the “all for one” card then and sacrifice the dream while hope still burned in them?

On a day like today, when none of them has hope, their ambitions crushed like grapes, their campaigns running (all but one) on the fumes of donors past, not one of them standing alone has a chance to win without massive outside intervention.

Yesterday is the wrong day to make a smart decision now. The Prisoner’s Dilemma moment has passed. The game they’re each now playing is “Daddy please save me.”