On the one hand, a new finance fad of “green bonds” shows that investors recognize that climate change is a risk. On the other, it simply perpetuates the convenient but false notion that the private sector by the virtue of cute packaging is a leader as opposed to a laggard in addressing climate change. In fact, confirming doubts about the ability of Wall Street to have good intentions, these green bonds are at best a gimmick to enrich middlemen at the expense of communities and investors and at worst, an exercise in finding new muppets.

A green bond is a type of fixed-income instrument that is specifically earmarked to raise money for climate and environmental projects. These bonds are typically asset-linked and backed by the issuing entity’s balance sheet, so they usually carry the same credit rating as their issuers’ other debt obligations.​

One of the early promoters of green bonds was International Finance Corporation, an affiliate of the World Bank. IFC’s claim to fame was making emerging economies safe for investment banks by encouraging them to develop capital markets, as in exposing them to destabilizing hot money flows. IFC was a very early promoter of green bonds, starting in 2010. The World Bank also lays claim to a Green Bonds program which it says goes back to 2008 (not sure how much of this is retrospective rebranding, nor is it clear how much of the IFC Green Bonds are under the World Bank scheme).

The Wall Street Journal reported today that green bonds are getting a following, albeit still small relative to the size of bond markets:

Community Preservation Corp. has issued a $150 million sustainability bond, the largest such sale by a community development financial institution, or CDFI.

The deal by the New York nonprofit housing lender is part of a wave of new debt sales expected to fuel record issuance of green, social and sustainability bonds in 2020.

As debt investors clamor for more options to achieve their environmental, social and governance, or ESG, objectives, investment banks are expanding their offerings beyond green bonds, which focus on environmental projects. Social bonds fund programs with objectives such as health-care access, food security and equitable employment, while sustainability bonds combine green and social initiatives. 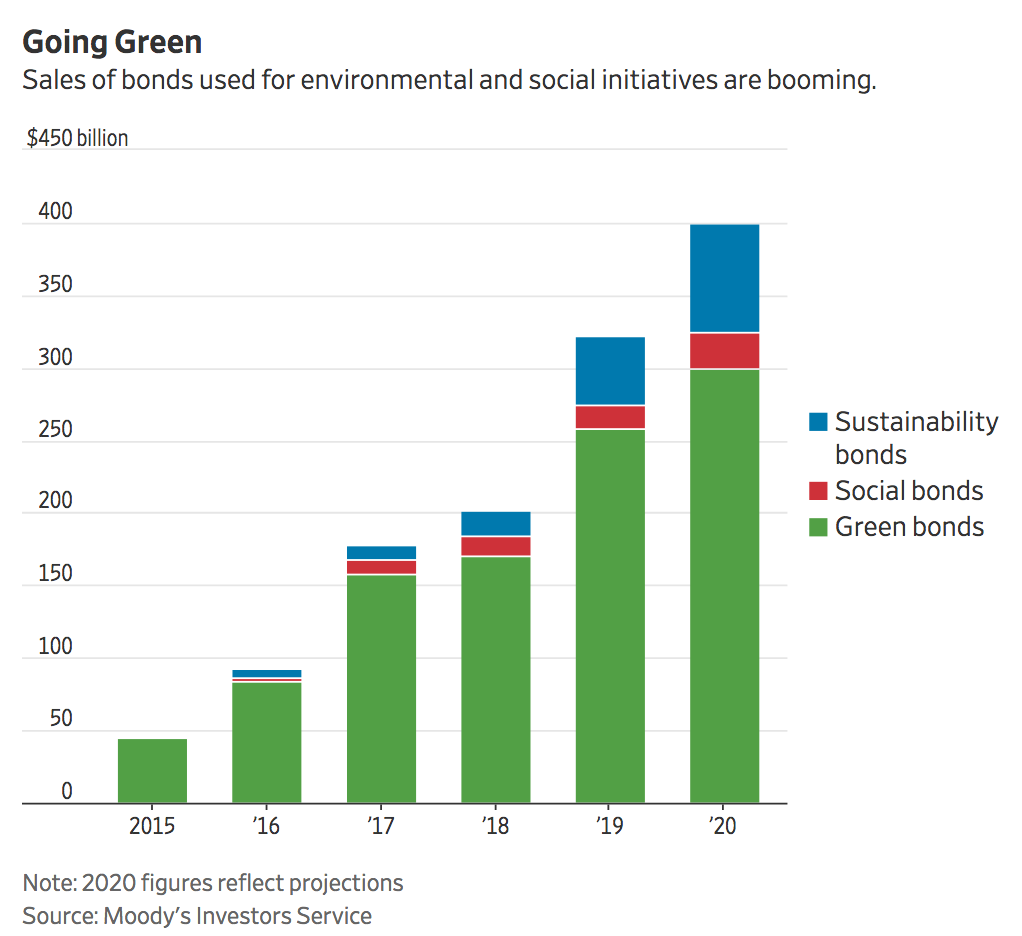 Global issuance of bonds in all three categories will likely hit $400 billion this year, a 24% increase from 2019, according to Moody’s Investors Service….Manhattan-based Community Preservation, which lends to multifamily affordable housing developments, completed a 10-year sustainability bond at 2.87% last week. The lender will use the proceeds to refinance the bank loans it has historically used to finance projects, a person familiar with the matter said….

Such deals comprise a small part of overall debt markets, but their share is growing rapidly, according to research by Moody’s. Green, social and sustainability bonds accounted for 4.5% of global bond issuance in 2019 and will likely hit 5% to 7% this year, up from 3% in 2018, the firm said in a report.

Needless to say, there’s a lot not to like about this idea:

This at best is fiddling while the planet burns. Even if you take this scheme at face value, putting a green seal of approval on particular investments is going to do very little to change investor behavior. Yes, there may be some “green” funds that try to cater to “do gooder” investors. But the behavior of investors so far has been to selectively avoid evils (for some coal, for others, fossil fuel players broadly).

But how far can you go with that approach? 75% of electricity in the US comes from fossil fuel sources, so electric cars still contribute to global warming. And more generally, any newer development/new infrastructure project will make heavy use of our current, heavily fossil-fuel consuming transportation system to get done. For instance, the energy cost of building a new, energy efficient home is roughly 10X the annual energy cost of traditional similar-sized existing home.

Private financing is the wrong way to mobilize resources to meet public needs. Numerous studies have found that private investors assign far too high a discount rate, which is a fancy way that they set their return requirements too high. Recall that Sir Nicholas Stern argued that the correct discount rate for evaluating climate change related costs and damage was 0.5%. Think even a super green investor would accept that big a haircut to market returns for a long-dated investment?

And perhaps the more obvious point is that restructuring our economy to use way way less of everything and be more energy and resource efficient about it is not about returns, it is about maintaining some level of civilization. We’re presently on a fast track to a Jackpot, with not much hope of a William Gibson-esque scenario of 20% of the population and pretty much all of the amenities making it through. So subjecting “save us from ourselves” projects in a financial returns framework is just more of what got us in this mess in the first place.

In keeping, Nassim Nicholas Taleb has taken a more tough-minded position, that we have only one planet and we can’t afford (to crudely simplify his argument) to take tail risks that result in destruction of the only habitat we have (although we are awfully far down that path already). His forceful advocacy of the precautionary principle means the remedies don’t lie in the realm of cute investment gimmickry that might save some basis points, but prohibition.

Many of these projects will be greenwashing. Did you notice the presence, in the Wall Street Journal article, of a paid certifier? Anyone who is more than a casual buyer of organic foods know that “organic” covers a multitude of sins, and USDA “organic” is a low bar. The Wild West of finance is even more prone to gimmickry. Cap and trade is rife with fraud due to the lack of independent supervision and enforcement. Carbon offset programs are not much better. From the Financial Times:

Thanks to climate change, a rash of organisations are now offering to absolve guilt over polluting if we pay them to “offset” carbon, sometimes by planting trees. While their motives may be admirable, this new gold rush could prove to be a dangerous delusion…

But it is much easier to buy the credit than verify the reduction — especially if it takes place on another continent and might have happened anyway.

Take trees. Reforestation has rightly become fashionable, given the devastation wreaked on forests by agriculture. But trees need years of tender care to grow big enough to act as carbon sinks; and their value depends on where they are. Clicking “donate” does not guarantee proper stewardship, or auditing. The Vatican’s own modern-day experiment with indulgences ran into trouble in 2007, when a forest that was supposed to make the Holy See carbon neutral turned out not to exist.

Even real projects may not represent a net gain to the environment. A 2016 study found that 73 per cent of carbon credits provided little or no environmental gain, as they supported projects that would have happened anyway. That figure rose to 85 per cent of projects under the UN’s Clean Development Mechanism, which issues a carbon credit for each tonne of CO2 avoided through investments in developing countries.

More subtly, even well-intended one-off projects can have significant costs in terms of other scarce resources. There is not only too little action, there is also too little recognition of the complexity of environmental costs. The simple example is the pretense that fracking is better than traditional oil wells, ignoring the costs of methane releases, damage to aquifers and water supplies, the cost of fracking sand, and increased earthquake risk. Not that anyone would give fracking a green stamp of approval, but it has been touted as a cleaner energy source than other fossil fuels.

A more typical case is not weighing the cost of the use of rare earths and other environmentally costly materials in electric vehicles and wind turbines, or the energy costs of solutions to increasingly scarce potable water.

This approach is largely about greasing middlemen’s palms a bit for PR purposes. Even thought the Wall Street Journal article above touts how Community Preservation Corp. lowered its cost of capital via its green bonds, a careful reader would note that was by comparison the cost of its existing bank loans. There’s no mention whatsoever of green bonds shaving basis points off of fundraising costs, the sort of calculus you see all the time when issuer compare straight fixed rate financing versus a floating rate borrowing combined with an interest rate swap.

The cost of the green certification ought to be included in determining the issuer’s effective interest rate but probably isn’t.

On the possible yield savings side, the big money investors who want to improve appearances are mainly big public pension funds like CalPERS, institutional fund managers like BlackRock who need to show competitive returns, foundations, endowments, and some sovereign wealth funds. But even CalPERS, whose board is terribly enthusiastic about socially responsible investing of all sorts, has a staff that regularly checks them because as fiduciaries, they have to put top priority on investment returns by virtue of being a fiduciary.

So if this exercise is to result in lower funding costs for issuers (as in the folks seeking the dough), it depends on finding suckers. Martin Armstrong argues:

There are hard links between the world’s largest financial groups, including Goldman Sachs, pushing the climate change agenda by selling “Green Bonds” which are the latest scheme on how to lose a lot of money very fast. They promise to be great sellers as they whip people up into believing they can do their part by purchasing green climate bonds.

The goal is to tap into literally trillions of dollars in the bond markets by capturing new wealth from a younger generation ignorant of investment. There are major global banks and financial giants with their hands out hoping to get more than a fair share of a market that loses money with good consistency…

The last time there was such a movement with a moral divestment was in the tobacco industry. That turned out to be more show than truth and it merely resulted in the entire sector being converted into value-orientated income stocks.

It appears that as the West seems to pretend it has a conscience, they seem to be selling to state-owned institutions that are owned by Russians, Chinese, or Middle Eastern entities. It is merely changing ownership, not actually shutting down the companies or changing the use the fossil fuels.

Armstrong is conflating two issues. One is divestment. A problem with ESG driven divestment is that if you were to be rigorous, there would be pretty much nothing to buy. Another is the one he mentions: divestment does not stop the bad activity, it merely changes who profits from it. This is one of CalPERS’ justifications for sticking with some very unvirtuous-looking holdings: they can do more to effect change by being a pesky shareholder than by exiting. The jury is still out on that one.

His other beef is with green bonds, that Wall Street is hoping to find suckers and sell them otherwise not very good deals by slapping a virtue stamp on them. It’s too soon yet to see if enough naifs wind up getting in the pool to make a difference.