Yves here. Deflation, here we come….don’t let the fact that it’s solar panels take your eye off the ball. The expected solar price cuts don’t look to be driven by greater production efficiencies but by the desire of Chinese producers to replace fallen domestic demand and gain share.

By Haley Zaremba, a writer and journalist based in Mexico City. Originally published at OilPrice

The solar market is becoming supersized, with the size and scale of solar projects soaring and some of the biggest names in the tech industry getting behind the renewable energy boom. Despite the high-profile failure of the $1 billion Crescent Dunes solar plant developed by SolarReserve way out in the Nevada desert, which was going to be the biggest solar plant in the world, the solar industry is moving forward in its belief that, in most cases, bigger is better. 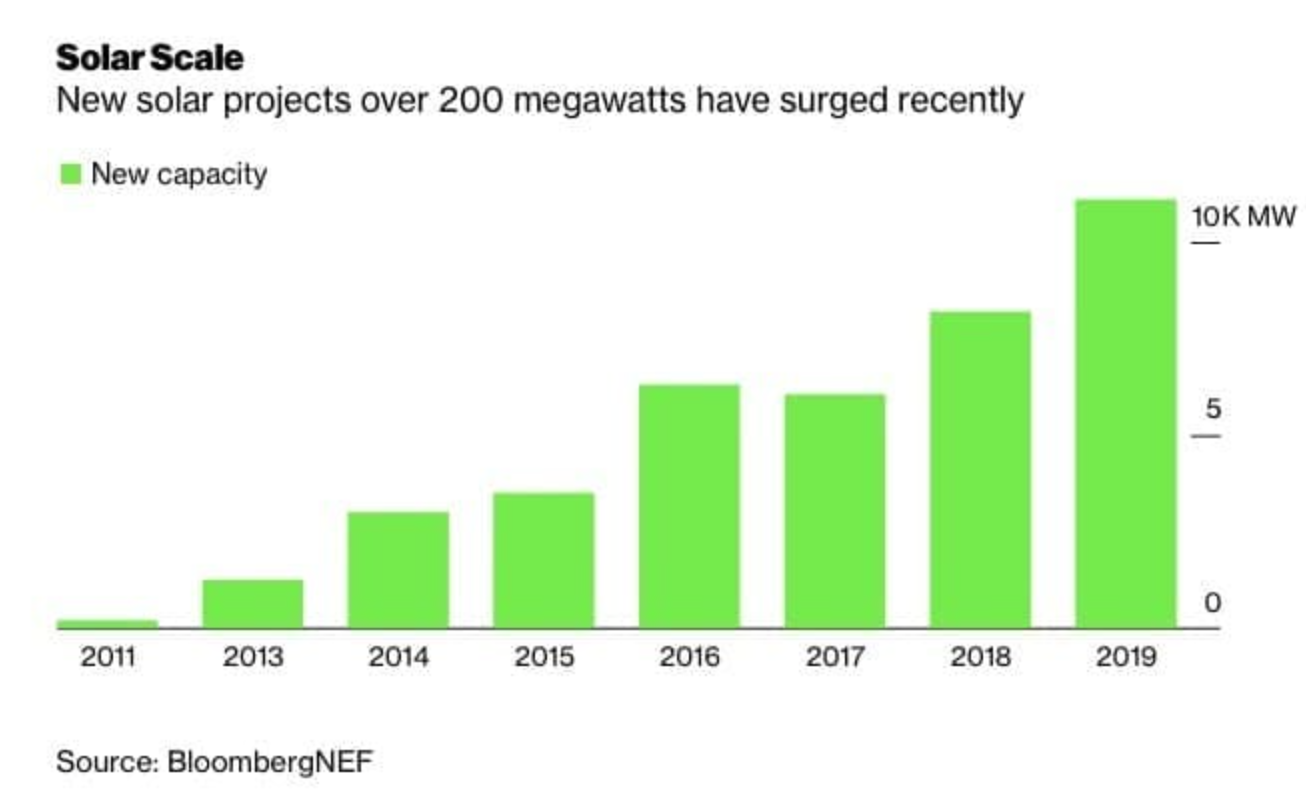 Along with the scale of these projects, investment in major solar developments is also growing, with the tech sector leading the charge. As lead sustainability analyst at BNEF Jonas Rooze told PV Magazine, “corporations have purchased over 50 GW of clean energy since 2008. That is bigger than the power generation fleets of markets like Vietnam and Poland. These buyers are reshaping power markets and the business models of energy companies around the world.” Of those, “Google signed contracts to purchase over 2.7 GW of clean energy globally, followed by Facebook (1.1 GW), Amazon (0.9 GW) and Microsoft (0.8 GW).”

Now, Bloomberg Green, a “new multiplatform editorial brand focused on climate change news, analysis, and solutions” which debuted in January, reports that “an aggressive expansion by the world’s biggest solar manufacturers is under way, spurring a battle for market share and push to cut costs that signal more pain ahead for the industry.”

At the center of all this competition sits China. As the industrial center where the lion’s share of the components of solar cells and solar panels are manufactured, global expansion of the solar industry relies heavily on the nation. “China is by far the leader in the global solar supply chain, from the production of ingots to wafers, cells and panels,” says Bloomberg Green. “Of the top 10 cell makers for instance, nine are mainly Chinese companies. “Despite the havoc currently being wreaked on the Chinese economy by the COVID-19 coronavirus, however, top Chinese solar producers announced plans to significantly expand the sector.

China is determined to stay competitive; coronavirus be damned. As Robin Xiao, an analyst at CMB International Securities Ltd., told Bloomberg, these expansions are intended to “block rivals from adding new capacity.” According to this strategy, thirteen Chinese firms are to add a combined 40 gigawatts (at least) of yearly capacity “in ingots, wafers and cells each by the end of 2020, according to data from BloombergNEF.” However, this could have some negative unintended consequences, such as exacerbating the already problematic glut of photovoltaic products, which, in turn, could lead to price wars. “The plans were already in place before the coronavirus outbreak,” reports Bloomberg Green. “Companies tend to take a long-term view on expansions, and while growth in China is currently taking a hit as the world’s biggest market moves away from a reliance on subsidies, there are bets the global solar industry will see brighter days from next year through 2025.”

China is deciding to ramp up solar capacity in spite of the fact that domestic solar installations have dropped in the past two years, leading to what will more than likely be major overproduction in the short term. “The government is adopting a more market-oriented approach to ease its financial burden after years of subsidies that allowed the country to add more solar capacity than anywhere else in the world,” says Bloomberg Green. Experts expect a subsequent price war, followed by an acceleration of industry consolidation.

While China’s approach may seem overly optimistic, it would certainly be a good thing for more Chinese industry (as well as global industry) to make the switch over to renewable energy. With peak oil and the tipping point toward catastrophic climate change looming right around the corner, sometimes a little optimism is needed.