Yves here. This post shows that how on a global basis, the economy was primed for a crisis due to the rapid rise of private sector debt in the wake of the 2008 meltdown. And as so often happens in debt binges, the money goes to not-very-productive activities, from overpriced college educations and share buybacks in the US to ghost cities in China. As a result, the overall growth rate fails to compensate for the rising loan burden.

The global economy has experienced four waves of rapid debt accumulation in emerging and developing economies over the past 50 years. This column examines these waves of debt and puts the fourth (current) wave in historical context. The current wave of debt, which started in 2010, stands out for its exceptional size, speed, and breadth. While the previous three waves all ended with widespread financial crises, policymakers have a range of options to reduce the likelihood of the current debt wave ending in crisis.

The sharp rise in global debt since the global financial crisis, together with record low interest rates, has led to an active debate about the benefits and risks of further debt accumulation (Blanchard 2019, Mauro and Zhou 2019, Moreno Badia et al. 2020, Rogoff 2019, Wyplosz 2019). Much of this debate focuses on government spending in advanced economies. But most of the increase in debt since 2010 has been in emerging market and developing economies (EMDEs), which saw their debt rise by 54 percentage points of GDP to a record high of about 170% of GDP in 2018 (Figure 1). This increase has been broad-based, affecting around 80% of EMDEs. The latest wave of debt is not unique. Since 1970, EMDEs have seen three similar ‘waves’ of broad-based debt accumulation, all of which ended with widespread financial crises. But compared to the earlier waves, the current wave stands out for its exceptional size, speed, and reach. As such, despite record low interest rates, there is still a risk that the latest wave follows the historical pattern and ends in financial crisis. In a new CEPR Policy Insight, we shed light on this topic by comparing the current debt wave to its historical predecessors, empirically examining the links between rapid debt accumulation and financial crises, and drawing policy lessons (Kose et al. 2020).

Prior to the current wave, EMDEs experienced three waves of debt accumulation, which ended with well-known crises.

A comparison of these waves reveals common features. Each wave began during periods of low real interest rates. Borrowing was also often facilitated by financial innovations and/or changes in financial markets: the development of the syndicated loan market in Latin America in the first wave; financial and capital market liberalisation in East Asia in the second; and the growth of cross-border lending from EU-headquartered ‘mega-banks’ after regulatory easing in the third (Altunbaş et al. 2006, Takáts 2010).

The widespread financial crises that marked the end of these waves were typically triggered by external shocks that resulted in sharp increases in investor risk aversion, spikes in borrowing costs, and sudden stops of capital inflows. This led to steep falls in GDP growth, with output losses particularly large and protracted in the first wave. While currency crises were short-lived, sovereign debt crises were prolonged. For example, in the first wave debt relief was only provided in the late 1980s for (mostly) Latin American countries with the introduction of the Brady Plan (Cline 1995). For low-income countries, debt relief came in the mid-1990s and early 2000s with the Heavily Indebted Poor Countries initiative and the Multilateral Debt Relief Initiative, spearheaded by the World Bank and the IMF (World Bank 2017).

How Costly Are Debt-Related Crises at the Country Level?

To provide a more granular perspective on the consequences of debt accumulation, we also examine episodes of particularly rapid public and private debt accumulation at the country level. These episodes are selected by employing a widely used statistical algorithm (following Harding and Pagan 2002), which identifies cyclical turning points in the debt-to-GDP ratio.

A period of rising debt is labelled as an episode of rapid accumulation if the increase in the debt-to-GDP ratio exceeds its maximum ten-year moving standard deviation during the phase. We label episodes as being associated with crises if a financial crisis occurred either during the episode, or two years after the episode. Financial crises are defined as in Laeven and Valencia (2018).

About half of these episodes were accompanied by financial crises that led to severe output losses compared to countries without crises. After eight years, GDP and GDP per capita were around 6-10% lower in crisis episodes, while investment was 15-22% lower. Financial crises in government debt accumulation episodes featured larger output losses than private debt episodes.

Crises associated with these episodes were typically triggered by external shocks such as sudden increases in global interest rates, while domestic vulnerabilities often amplified the adverse impact of these shocks. Crises were more likely, or the economic distress they caused was more severe, in countries with higher short-term external debt and lower international reserves.

How Does the Fourth Wave Compare to Earlier Waves?

The latest wave of debt accumulation began in 2010 and has already seen the largest, fastest, and most broad-based increase in debt in EMDEs in the past 50 years. The average annual increase in EMDE debt since 2010 of almost 7 percentage points of GDP has been substantially larger than in each of the previous three waves (Figure 2). While the debt runup was largest in China, even in other EMDEs, debt rose by almost 20 percentage points of GDP, on average, between 2010 and 2018.

Figure 2 Average annual change in debt during the four waves 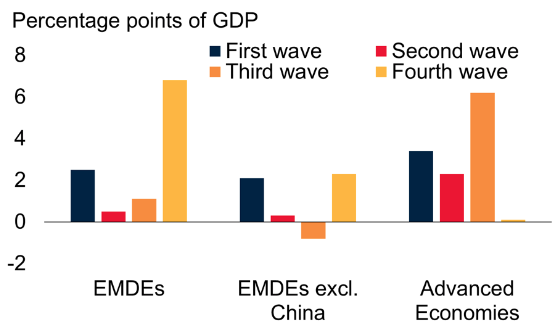 Source: Kose et al. (2020).
Note: First wave covered the period 1970-1989; second wave from 1990-2001; third wave from 2002-2009; and fourth wave from 2010 onwards. Emerging market and developing economies (EMDEs) include 147 economies. Average annual change calculated as total increase in debt-to-GDP ratios over the duration of a wave, divided by the number of years in a wave.

The current wave bears many similarities to the previous three waves. Global interest rates have been very low since the global financial crisis, and search for yield by investors has led to narrowing spreads for EMDEs. Changes in financial markets have boosted borrowing, including the rise of regional banks, growing appetite for local currency bonds, and increased demand for EMDE debt from the non-bank financial sector.

While EMDEs have gone through periods of volatility in the current wave of debt accumulation, they have not (yet) experienced widespread financial crises. However, the exceptional size, speed, and reach of debt accumulation in EMDEs during the fourth wave is a cause for concern. Despite the sharp rise in debt, growth in these economies has repeatedly disappointed, and they face weaker growth prospects in a fragile global economy (Figure 3). In addition to their rapid debt build-up, they have accumulated other vulnerabilities, such as growing fiscal and current account deficits and a riskier composition of debt (Kose and Ohnsorge 2019, Kose et al. 2018).

Figure 3 Growth and debt during the fourth wave 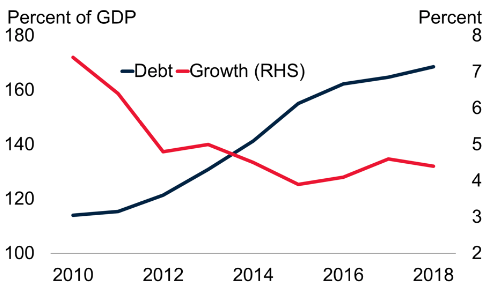 What Can Policymakers Do?

The lessons from the previous waves of debt highlight the critical role of prudent macroeconomic and financial policy frameworks. These include sound debt management and debt transparency, strong monetary and fiscal frameworks, and robust bank supervision and regulation. The IMF and World Bank have a critical role to play in spearheading these efforts, by encouraging common lending standards and highlighting current risks and vulnerabilities through analytical and surveillance work.

Authors’ note: The findings, interpretations, and conclusions expressed in this column are entirely those of the authors. They do not necessarily represent the views of the World Bank, its Executive Directors, or the countries they represent.