Jerri-Lynn here. A timely reminder of how the US did science planning in the days before neoliberalism and its market ideology became dominant.

By Marc Zimmer, Professor of Chemistry, Connecticut College,  Originally published at The Conversation

The U.S. has been the most productive country for science and technology for decades. Many of the basic policy tenets that supported American prowess date back 75 years, to a document called “Science: The Endless Frontier.” Released by the first U.S. presidential science adviser, engineer Vannevar Bush, just two weeks before the Hiroshima bombing in 1945, it would become the blueprint for postwar science.

“The Endless Frontier” led scientists to successfully advocate for federal scientific funding and a separation between science policy and politics. They argued that if science could win wars, it could also help maintain peace.

The report advocated that governmental, industrial and academic research can accomplish far more in partnership than in isolation. It led to the development of the modern American research university, the National Science Foundation and increased government funding for science research, which rose by more than a factor of 10 from the 1940s to 1960s. 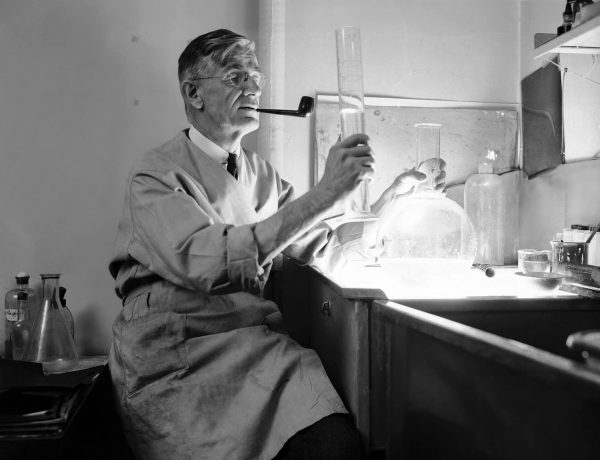 The science landscape has changed radically since Vannevar Bush was in the lab in the mid-20th century. AP Photo

But many facets of the plan aren’t working anymore, and the structural framework laid out in “The Endless Frontier” needs refreshing for 2020. Research funding, especially the government share for basic research, is being reduced, there is a narrower focus on short-term outcomes and U.S. federal agencies are cutting scientific advisory panels. How the country, the research community and the public respond to these changes will determine the United States’ geopolitical standing.

On the occasion of the 75th anniversary of the report, the National Academy of Sciences, The Kavli Foundation and the Alfred P. Sloan Foundation hosted a symposium to reflect upon the past, present and future of the United States’ scientific research enterprise. It brought together leaders from science, government, academia, business and philanthropy.

As a chemist in academia who’s just written a book called “The State of Science – What the Future Holds and the Scientists Making It Happen,” I was eager to see what symposium attendees had to say. The presentations and panels covered a range of topics, and four major themes – though not solutions – emerged.

Symposium attendees agreed: The U.S. needs a long-term federal science plan, one that spans many future administrations – a road map for science that is both protective and aspirational.

The consensus was that today’s level of federal funding and emphasis on market-driven research are imperfect. The path from lab bench to application has a significant gap – it takes time to convert research findings into a company, and venture capitalists are impatient. Many good ideas, such as large-scale affordable desalination, are dropped because the technology is complex and will take many years to commerialize.

Additionally, democracy is messy and slow. To stay competitive, it needs a long-term plan as was laid out back in 1945. As Rafael Reif, president of MIT, said, “Vannevar Bush envisioned a wild garden of scientific possibility…. At the current moment, [the scientific enterprise]… requires deliberate concentrated action to harvest the results. In effect, we need to farm for innovation.” hina has grown to rival the United States in scientific strength. Mick Ryan/Cultura via Getty Images

In large part thanks to strategies laid out in the 1945 Bush report, the U.S. has led the world in scientific innovation and research for over 70 years. But the ecosystem of the research world is changing.

China is a formidable scientific and technological competitor, particularly in its capacity to use science effectively and build partnerships with industry. Numerous speakers suggested that a lack of an American long-range coordinated plan that links academia, industry and federal research is letting the Chinese ascend.

Sen. Lamar Alexander, R-Tenn., told the audience, “The situation we are in is very much like being a very good football team, playing in a league that suddenly has gotten a lot better. There are a lot better teams in our league for the next 75 years than there have been in the last 75 years when it comes to science, technology and research.”

Presenters were torn about limiting American collaborations with China. Should the U.S. limit knowledge transfer or continue collaborations – the most effective way to advance scientific knowledge? Not surprisingly, most academics present favored more collaboration with researchers from China and other countries.

“Are we going to have the courage of our convictions to fund the science we need, at the level we need, to ensure our competitiveness? This is more important than knowledge seepage,” observed Ronald Daniels, president of Johns Hopkins University.

Gabriela González, professor of physics and astronomy at Louisiana State University, suggested that multinational partnerships are so important to modern science that graduate schools should teach students how to conduct collaborative science. Outreach and education are working to make sure tomorrow’s scientists and engineers reflect the whole U.S. population. Ariel Skelley/DigitalVision via Getty Images

The United States and the world as a whole have not been doing a good job at taking full advantage of the diverse pool of potential scientists. The STEM fields may have found and nurtured many of the future Einsteins, but we have fallen behind in cultivating new Marie Curies and George Washington Carvers – let alone the C.V. Ramans.

A 2017 National Center for Science and Engineering Statistics report shows that although white men make up only one-third of the U.S. population, they constitute at least half of the country’s scientists. Countries, companies and academic institutions are handicapping themselves if they don’t make use of all scientific talents available across a vast array of gender identities, races and ethnicities.

Thirty-seven of the 89 U.S. citizens awarded a Nobel Prize since 2000 were foreign-born. Most notably, all six American winners of the 2016 Nobel Prize in economics and STEM fields were immigrants to the United States. As Rafael Reif, himself an immigrant from Venezuela, put it, “immigrants are the oxygen” that let research survive and thrive.

Disturbingly, the National Science Foundation reports that the number of international graduate students coming to the U.S. dropped by 22,000 (5.5%) in 2017, though the decline hasn’t been as steep in the following years.

Communicating Science, Outside the Lab

Truth and facts are central to the workings of science. However, the increasing speed of scientific breakthroughs makes it harder to understand and communicate science and its complexities.

Actor Alan Alda, who founded the Alan Alda Center for Communicating Science at Stony Brook University, connected public misconceptions about scientific topics with the lack of good science communication. The public has to trust the research enterprise in order to support and learn from it. He said, “We don’t always have to agree, but we have to learn to hear each other,” and that requires good communication.

“We won’t succeed just by lecturing the public about science. We need to find ways to arm the leaders of tomorrow with a solid understanding of the social sciences and the humanities if they are to reach non-scientists.” —@marcia4science #EndlessFrontier pic.twitter.com/fau1T2BFkU

Maintaining and bolstering trust in science has never been more critical, as science has an ever greater potential to change or lives, for better or worse.