Yves here. Nathan is correct that making up for income lost to the pandemic would not be inflationary, no matter how big and scary the numbers look. However, as readers no doubt keenly appreciate, the US seems to lack the ability to get there, even if it had the political will. The delays, shortfalls and gaps are already leading to business failures, which destroy jobs, wealth, and leads those who are comparatively well situated to save to make up for anticipated collateral damage, which creates another leg down to the deflationary shock.

And too many officials are fixated with bailout math and mechanisms, and not the vastly more important, “How to alleviate bottlenecks and shortages” problem.

By Nathan Tankus. Originally published at Notes on the Crises 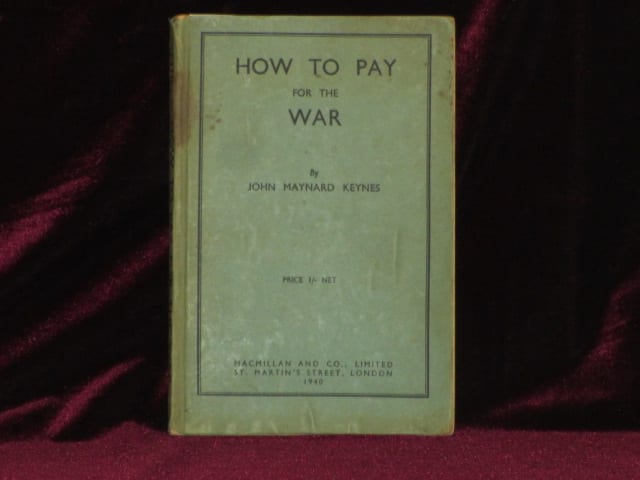 During the 2020 Democratic primary the main theme was “how are you going to pay for it?”. It has been a painful irony that that question evaporated in the smoke of multi-trillion dollar spending programs to fight the Coronavirus depression. Yet, the question isn’t inherently absurd.  “How to Pay For the War” was a pamphlet written in 1940 by John Maynard Keynes which is a classic for seriously thinking through the economic effects of a large spending and resource reallocation program. The problem with the mainstream media framing of the question is it was never about the practical economic problem of provisioning a spending program with physical resources without disrupting the functioning of the rest of the economy.

Instead, it was about the easiest thing for the Federal Government to find- money. People were scared of big spending numbers created by counting up spending over a decade-long period. Oftentimes this estimate was improperly compared to 1 year of GDP. This relentless hammering of his spending programs with the “payfor” question has now vanished in the smoke generated by federal reserve officials talking about how they have “infinite” money and congress spending money without payfors without a second thought.

Yet, Bernie’s program did posit a very strong full employment economy and did need to be resourced in physical terms . Many researchers have been working on filling in that void. I myself have been working on a long delayed report entitled “Monetary Policy for a Green New Deal” which introduced the term “non-fiscal payfors” to highlight all the tools from liquidity regulations on non-financial businesses to direct credit regulation that could be used to disemploy resources that could be redeployed. While the analytical tools involved are more sophisticated than Keynes’ time 80 years ago, the problem of resourcing large spending programs under conditions of high employment is basically the same. As Keynes sys:

In making money go further [with cost of living subsidies] it aggravates the problem of reaching equilibrium between the spending power in people’s pockets and what can be released for their consumption.

Many useful frameworks have been developed in the past 18 months since the Green New Deal became a lightning rod in U.S. politics but this issue, how to resource programs under high employment circumstances, has been made largely irrelevant. An unprecedented amount of resources and manpower is idle and unemployed right now. Our problem is not one of permanent shortages because of ongoing flows of nominal income that are “too large”.  Our problem is we can’t safely mobilize sufficient resources to conduct emergency services. We are experiencing temporary bottlenecks from either panic buying or the difficulty of reallocating resources to different supply chains. This is not a conventional “run on the supermarket” circumstance.

First – there isn't a food shortage – there's a distribution problem. Usually, ~1/2 of food is purchased at grocery/retail stores, and ~1/2 is purchased away from home at restaurants, schools, hotels, etc. But now, almost all food consumption has shifted to the first category.


Rather than ramping up production as much as we can logistically manage to do in a short amount of time, fighting the pandemic war at the resource level is about the physical redistribution of resources from certain areas to other areas. This means far more people devoted to supply chain management- a job that can at the very least be partially done from home. The trickier part is safely mobilizing people to produce more safety equipment and then mobilizing non-front line workers with spare safety equipment to meet other needs. The production of N-95 masks by means of N-95 masks, as it were.

The second element, which I’ve discussed from the beginning of this blog almost 3 weeks ago, is a financial one. On March 19th I said “The main economic problem is a financial one of balance sheets”. I stand by that. During war time the one concern we don’t really have is people paying their nominal debts. Nominal income suffuses the economy and even businesses in obscure sectors are often paid lots of money to convert their production lines to war-time activities. Today our major economic concern is people’s capacity to pay their bills. We could make up the income of everyone who has lost money out of public funds and this likely wouldn’t lead to excess demand later on, once the pandemic ends. All making up lost income does is allow people to pay their bills and leave them with the same wealth levels they would have had absent a pandemic. It’s hard to see where the problems emerge from this strategy, even as it carries a big sticker price.

Maddeningly, the easiest problem to solve- this financial one- is likely the one that congress will have the most trouble with. The question of resourcing the pandemic one is a matter of supply chain and factory reconversion experts, not economics per-se. What careful economic analysis can tell us is that while we’re on a war-time footing, we’re not dealing with war time resource allocation problems. Any resource that can be safely mobilized, can and should be mobilized and responding to our protective equipment bottleneck will allow us to access a lot of idle resources that are easily available. In other words, in normal times we need fiscal and non-fiscal payfors. Today the payfor question in whatever form is irrelevant as it could possibly be.

P.S. I apparently wrote about the same thing Joe did today.

WE DON'T NEED WAR BONDS TO FINANCE THE WAR

In today's @Markets newsletter, I wrote about why war bonds are not only unnecessary for the fight against COVID-19, but would actually be harmful.

Sign up here to get it in your inboxes https://t.co/e5TYtjIuOw pic.twitter.com/2MOoSLQwsh